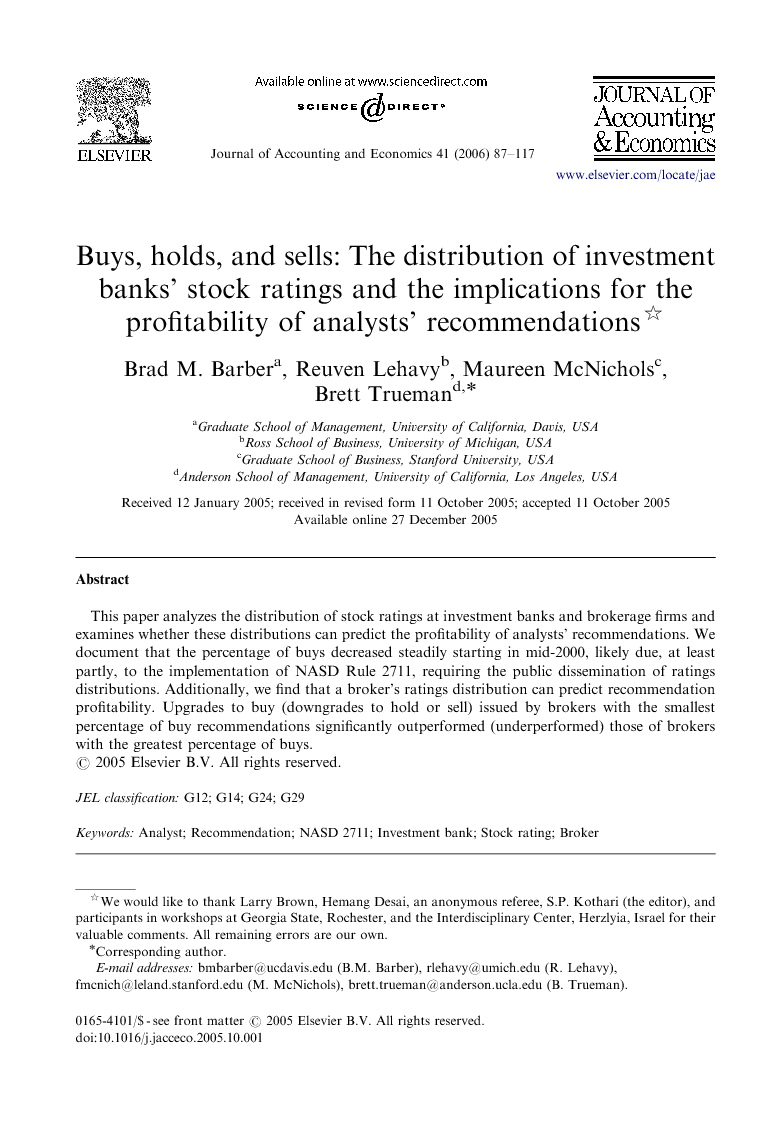 With the heightened regulatory scrutiny of security analysts as a backdrop, this paper analyzes the distribution of brokers’ stock ratings across buys, holds, and sells. Our analysis also sheds light on the effect that NASD Rule 2711 has had on the observed tendency of analysts to issue many more buy than sell recommendations. Consistent with Barber et al. (2003) , we find that the percentage of buy recommendations increased substantially from 1996 to 2000, at one point exceeding the number of sell ratings by a ratio of more than 35:1. Notably, the difference between the percentage of buy recommendations of the large investment banks singled out for sanction in the Global Research Analyst Settlement and the buy recommendation percentage of the non- sanctioned brokers is economically quite small during the pre-NASD 2711 period. From the middle of 2000 the percentage of buys in our sample decreased steadily; by the end of June 2003, buys exceeded sells by less than a 3:1 ratio. This decrease probably was due, in part, to a worsening economy and a declining stock market. However, our findings strongly suggest that the implementation of NASD Rule 2711, which made brokers’ ratings distributions public, also played an important role. Subsequent to NASD 2711’simplementation, the percentage of buy recommendations decreased from 60 to 45 percent, while the percentage of sells rose from 5 to 14 percent. We also investigate whether the distribution of a broker’s stock ratings can predict the profitability of its future recommendations. Theoretically, it should have predictive power as long as: (i) recommendations, in general, have investment value; (ii) market prices do not instantaneously incorporate the information implicit in analysts’ recommendations and in brokers’ ratings distributions; and (iii) the implicit and/or explicit criteria used to classify recommendations into buys, holds, and sells differ across brokers. The buy recommendations of those brokers who are less inclined to issue buys should outperform those who more readily give them, while their sell recommendations should underperform. Consistent with these conjectures, the upgrades to buy of the brokers issuing the smallest percentage of buy recommendations significantly outperform those of the brokers with the greatest percentage of such recommendations, by an average of 50 basis points per month. Conversely, the downgrades to hold or sell of those issuing the fewest buy recommenda- tions significantly underperform those of the brokers issuing the most such recommenda- tions, by an average of 46 basis points per month. These results suggest that the disclosure of brokers’ stock rating distributions, as required by the new rules, would have helped investors in their evaluation of analysts’ research reports during this time period. Interestingly, these differences diminish in magnitude and lose their significance in the quarters after the implementation of these regulations. While care must be taken in drawing strong inferences from just a few quarters, this is additional evidence that the new rules have had an effect in disciplining those brokers who tended to issue more buy recommendations than others. This is good news for those who view this as an important goal of these new regulations.