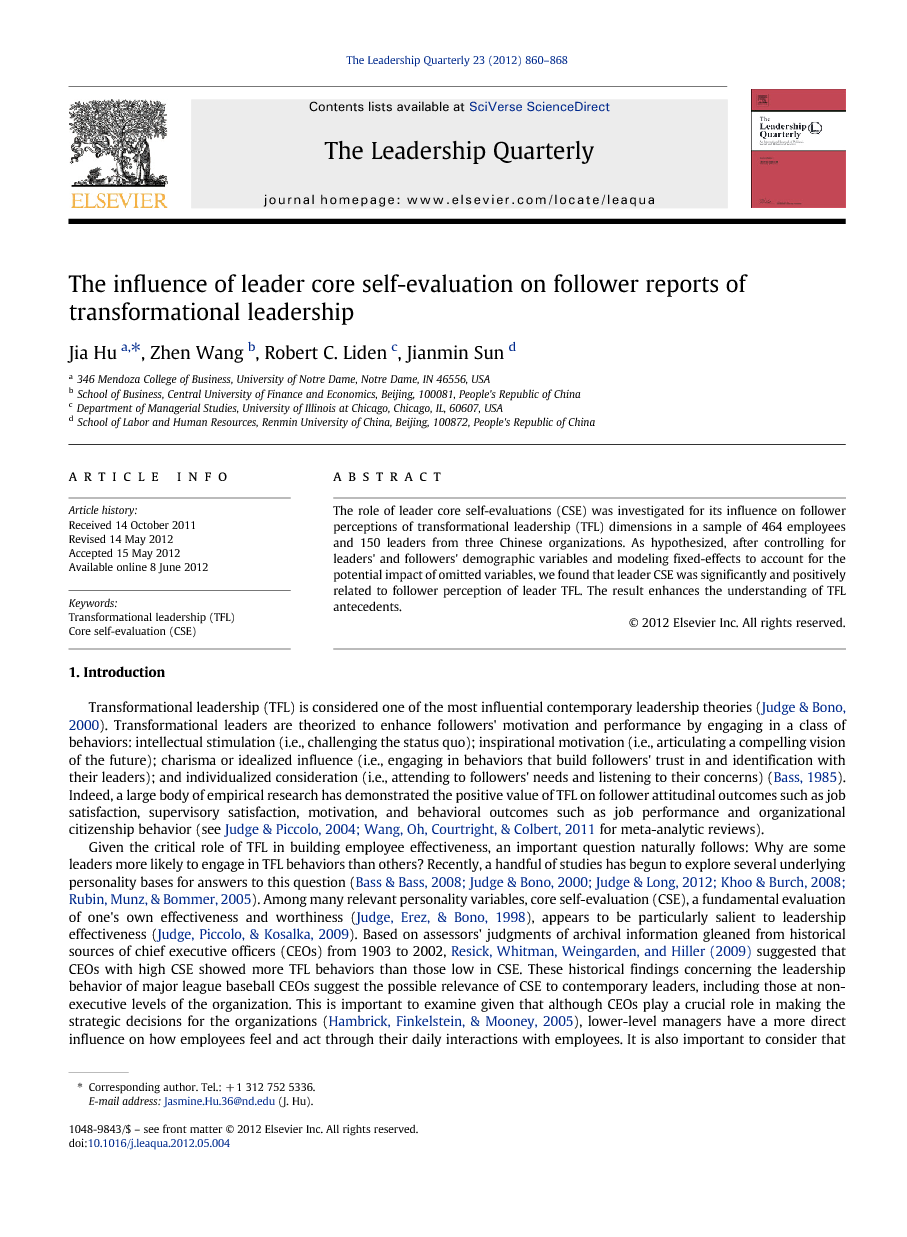 The role of leader core self-evaluations (CSE) was investigated for its influence on follower perceptions of transformational leadership (TFL) dimensions in a sample of 464 employees and 150 leaders from three Chinese organizations. As hypothesized, after controlling for leaders' and followers' demographic variables and modeling fixed-effects to account for the potential impact of omitted variables, we found that leader CSE was significantly and positively related to follower perception of leader TFL. The result enhances the understanding of TFL antecedents.

Transformational leadership (TFL) is considered one of the most influential contemporary leadership theories (Judge & Bono, 2000). Transformational leaders are theorized to enhance followers' motivation and performance by engaging in a class of behaviors: intellectual stimulation (i.e., challenging the status quo); inspirational motivation (i.e., articulating a compelling vision of the future); charisma or idealized influence (i.e., engaging in behaviors that build followers' trust in and identification with their leaders); and individualized consideration (i.e., attending to followers' needs and listening to their concerns) (Bass, 1985). Indeed, a large body of empirical research has demonstrated the positive value of TFL on follower attitudinal outcomes such as job satisfaction, supervisory satisfaction, motivation, and behavioral outcomes such as job performance and organizational citizenship behavior (see Judge and Piccolo, 2004 and Wang et al., 2011 for meta-analytic reviews). Given the critical role of TFL in building employee effectiveness, an important question naturally follows: Why are some leaders more likely to engage in TFL behaviors than others? Recently, a handful of studies has begun to explore several underlying personality bases for answers to this question (Bass and Bass, 2008, Judge and Bono, 2000, Judge and Long, 2012, Khoo and Burch, 2008 and Rubin et al., 2005). Among many relevant personality variables, core self-evaluation (CSE), a fundamental evaluation of one's own effectiveness and worthiness (Judge, Erez, & Bono, 1998), appears to be particularly salient to leadership effectiveness (Judge, Piccolo, & Kosalka, 2009). Based on assessors' judgments of archival information gleaned from historical sources of chief executive officers (CEOs) from 1903 to 2002, Resick, Whitman, Weingarden, and Hiller (2009) suggested that CEOs with high CSE showed more TFL behaviors than those low in CSE. These historical findings concerning the leadership behavior of major league baseball CEOs suggest the possible relevance of CSE to contemporary leaders, including those at non-executive levels of the organization. This is important to examine given that although CEOs play a crucial role in making the strategic decisions for the organizations (Hambrick, Finkelstein, & Mooney, 2005), lower-level managers have a more direct influence on how employees feel and act through their daily interactions with employees. It is also important to consider that only when leaders' TFL behaviors are perceived, recognized, and appreciated by their followers, do those behaviors have positive value for organizational effectiveness (Bass, 1990). As Yammarino and Dubinsky (1994, p. 792) noted, TFL involves the extraordinariness seen “in the eyes of the beholder” and follower attribution of TFL is the key for understanding the importance of TFL. Thus, a primary focus of the current study was to further this area of inquiry by theorizing and investigating leader CSE as an antecedent of TFL as perceived by their followers. We sought to make at least two contributions to the literature, illustrated in Fig. 1. First, we extend the growing but still limited body of research on the antecedents of TFL (Bommer et al., 2004, Judge and Bono, 2000, Pawar and Eastman, 1997, Peterson et al., 2009 and Rubin et al., 2005). Specifically, we attempted to assess the purported dispositional foundation of TFL by examining leaders' CSE as a potential driver. Second, the leadership (Elkins & Keller, 2003) and CSE (Piccolo, Judge, Takahashi, Watanabe, & Locke, 2005) literatures have both called for more studies involving non-Western samples to explore whether leadership and personality theories developed in the United States generalize to other cultures. Our investigation of three Chinese companies represents a response to these calls.

The current study integrates TFL and CSE by providing evidence toward an understanding of underlying leader characteristics that promote engagement in TFL behaviors. Our findings highlight the positive relationships between leader CSE and TFL dimensions. We hope that our study encourages researchers to explore additional antecedents of TFL.