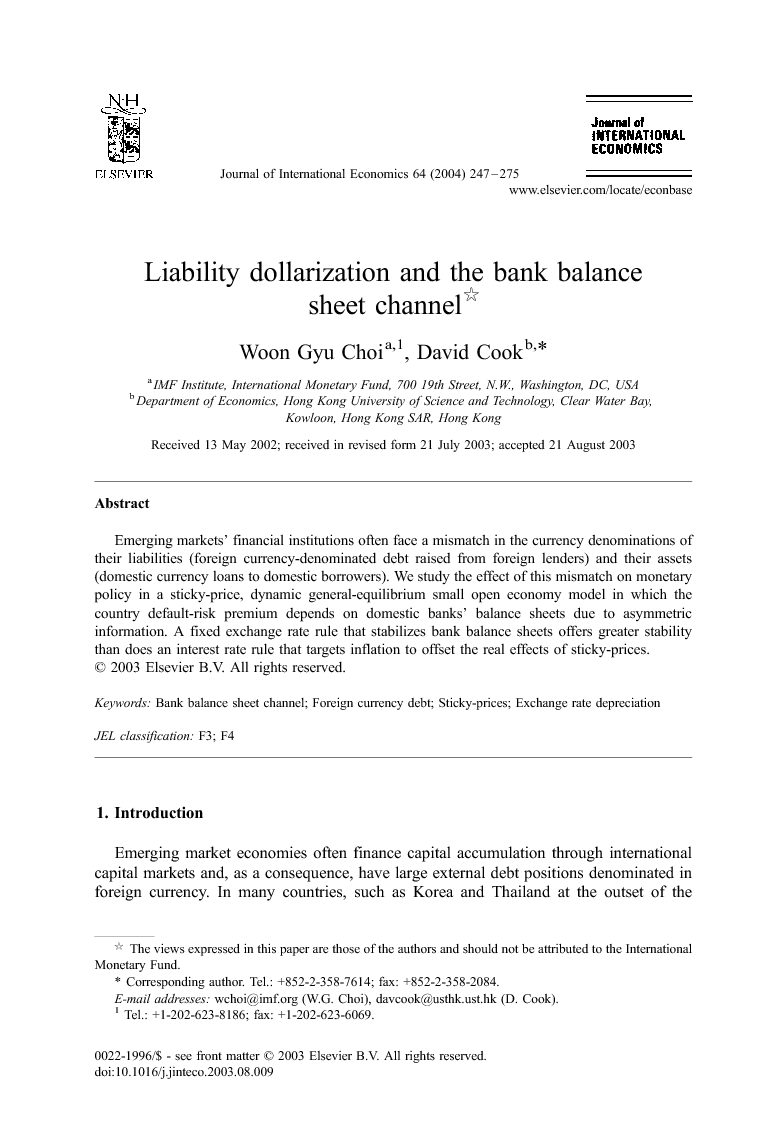 Emerging markets' financial institutions often face a mismatch in the currency denominations of their liabilities (foreign currency-denominated debt raised from foreign lenders) and their assets (domestic currency loans to domestic borrowers). We study the effect of this mismatch on monetary policy in a sticky-price, dynamic general-equilibrium small open economy model in which the country default-risk premium depends on domestic banks' balance sheets due to asymmetric information. A fixed exchange rate rule that stabilizes bank balance sheets offers greater stability than does an interest rate rule that targets inflation to offset the real effects of sticky-prices.

A monetary policy that targets inflation can ameliorate the destabilizing effects of sticky prices in a small open economy. In an economy in which sticky prices are the only nominal rigidity, an activist monetary rule leads to greater real stability than does a fixed exchange rate. However, many developing economies have a large negative debt position, much of which is denominated in foreign currencies. This paper shows that a pegged exchange rate can offer greater stabilization benefits to such an economy than does a more activist policy despite the presence of sticky prices. The exposure of banking systems to currency risk may be one reason, as Calvo and Reinhart (2002) show, that the monetary policies of many developing economies target the nominal exchange rate. Our analysis applies only to a permanent, credible fixed exchange rate. Vulnerability of the economy to devaluation may indicate that a fixed exchange rate without a commitment technology may be subject to shocks, reflecting changes in expectations of future devaluation. Mendoza and Uribe (2000) model an unsustainable fixed exchange rate-based stabilization plan with a stochastic timing of a future devaluation. Uncertainty about the timing of the devaluation results in sharper real responses to the stabilization plan and anticipated breakdown. In Mendoza (2001) shocks to the probability of future devaluations lead to a current contraction, because a future devaluation increases the likelihood and severity of future sudden stops in capital flows. In our model, current investment and consumption are affected by expectations about the future default-risk premium as well as its current level. An increase in the probability of a future devaluation will generate an expected rise in the country’s default-risk premium and a business cycle contraction, even if the current exchange rate remains stable. The potential for fixed exchange rate regimes to be subject to credibility shocks emphasizes the need for a commitment mechanism, such as dollarization. Our model abstracts from several aspects of the reality of financial systems. First, as in Carlstrom and Fuerst (1997) and subsequent literature, we assume that all loans are very short term. The share of short-term debt in total debt in Asian countries was substantial at the onset of the financial crisis9, which may lend support to this modeling choice. Extending the monitoring cost literature to an analysis of longer-term debt contracts is beyond the scope of this paper. However, long-term debt may be less subject to sharp swings in the default-risk premium, moderating our results. Second, our model assumes the absence of markets that allow financial intermediaries to hedge or otherwise ameliorate their currency mismatch. This is described by Eichengreen and Hausmann (1999) as the ‘‘original sin’’ view of liability dollarization, which argues that the lack of opportunities to issue external domestic currency debt or hedge foreign currency debt is a function of undeveloped financial markets in developing economies. Others such as Burnside et al. (2001) argue that the currency mismatch is the result of implicit government guarantees. If true, eliminating such a distortionary policy would reduce the incentive of banks to accept such destabilizing currency mismatches.