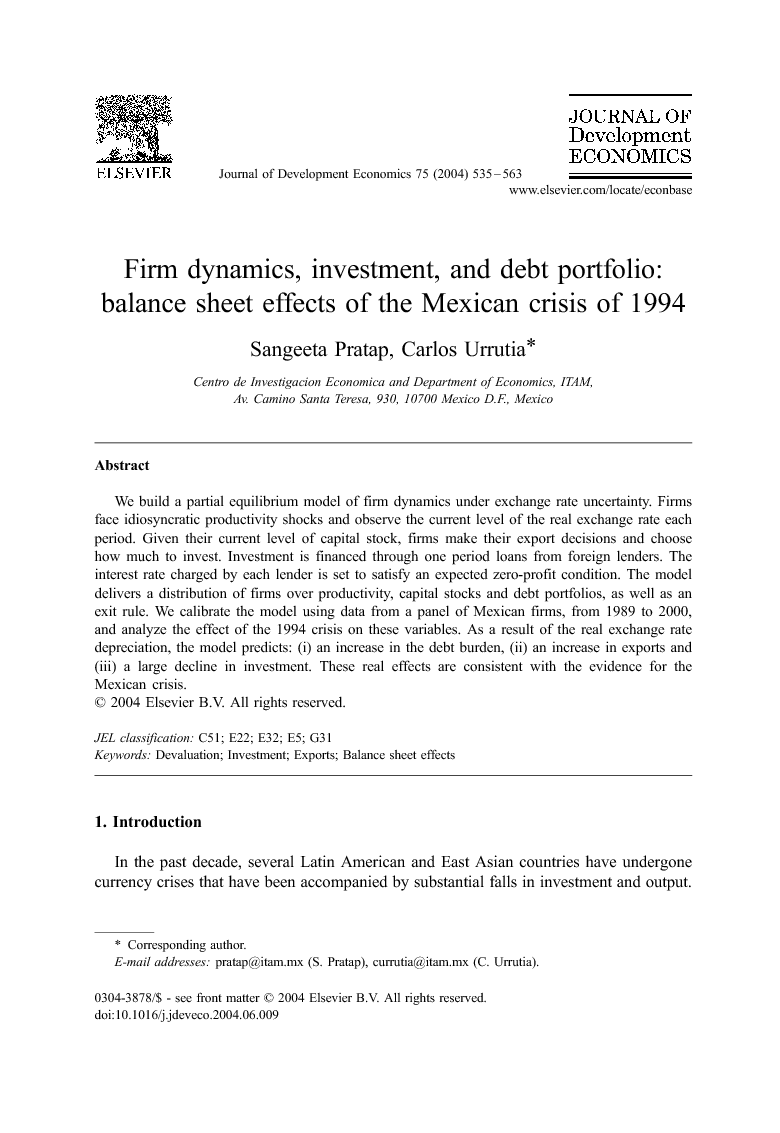 We build a partial equilibrium model of firm dynamics under exchange rate uncertainty. Firms face idiosyncratic productivity shocks and observe the current level of the real exchange rate each period. Given their current level of capital stock, firms make their export decisions and choose how much to invest. Investment is financed through one period loans from foreign lenders. The interest rate charged by each lender is set to satisfy an expected zero-profit condition. The model delivers a distribution of firms over productivity, capital stocks and debt portfolios, as well as an exit rule. We calibrate the model using data from a panel of Mexican firms, from 1989 to 2000, and analyze the effect of the 1994 crisis on these variables. As a result of the real exchange rate depreciation, the model predicts: (i) an increase in the debt burden, (ii) an increase in exports and (iii) a large decline in investment. These real effects are consistent with the evidence for the Mexican crisis.

We have built a model in which movements of the real exchange rate have important effects on firms’ dynamics, productivity and investment. The key channels seem to be the competitiveness effect, affecting exports and the balance sheet effect, affecting foreign debt burden. We use the model to analyze the effects of the 1994–1995 Mexican devaluation and obtain consistent results in terms of: (i) an increase in the debt burden, (ii) an increase in exports and (iii) a decline in investment, immediately after the devaluation. The experiment, however, has some shortcomings, especially in its ability to predict the medium term effects of the devaluation. First, we do not account for the sustained export boom in Mexico following the 1995 crisis, which are likely to be a by-product of structural reforms (as NAFTA). This boom had echoes in investment and sales in the economy, which are also underpredicted by our model. Including these reforms in the analysis is an interesting topic for future research.