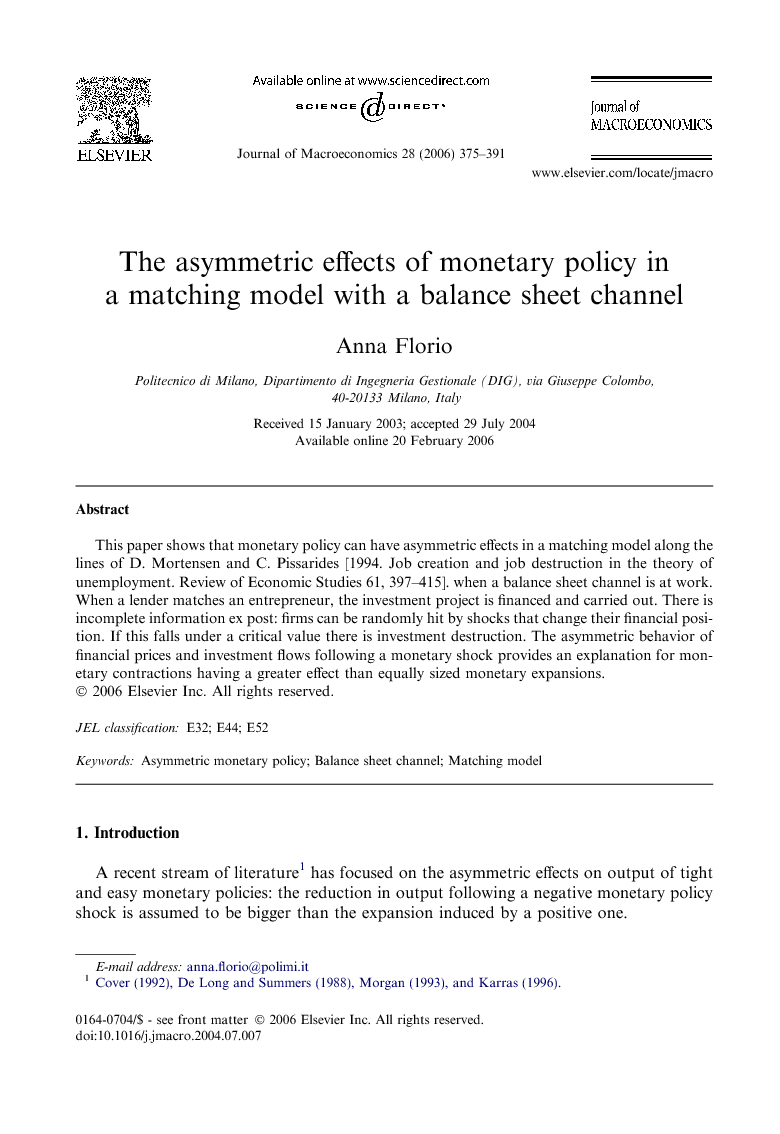 This paper shows that monetary policy can have asymmetric effects in a matching model along the lines of D. Mortensen and C. Pissarides [1994. Job creation and job destruction in the theory of unemployment. Review of Economic Studies 61, 397–415]. when a balance sheet channel is at work. When a lender matches an entrepreneur, the investment project is financed and carried out. There is incomplete information ex post: firms can be randomly hit by shocks that change their financial position. If this falls under a critical value there is investment destruction. The asymmetric behavior of financial prices and investment flows following a monetary shock provides an explanation for monetary contractions having a greater effect than equally sized monetary expansions.

A recent stream of literature1 has focused on the asymmetric effects on output of tight and easy monetary policies: the reduction in output following a negative monetary policy shock is assumed to be bigger than the expansion induced by a positive one. The theoretical reasons for an asymmetric effect of monetary policy fall into one of the following categories: asymmetric price adjustment,2 the term structure of interest rates, credit market imperfections. In this paper, we focus on the third possibility. The asymmetric effects of monetary policy will be explored in a model where the choice of funding and implementing a new investment project or destroying an existing one is a function of the balance sheet position of the entrepreneur. In such a model the meeting of the entrepreneur-borrower and the lender is modelled by means of a matching function which incorporates the difficult relationship between lender and borrower. The so called matching models have been applied mostly to the labor market.3 In recent years, however, on the ground of the similarities between labor and credit market relationships, the matching framework has been extended to describe the credit market when either a monetary or a lending channel is present.4 What seems to be absent in this stream of literature, however, is the application of the matching framework to a context where there is a role of firms’ balance sheet position in determining the moment when to destroy an existing investment; this is the approach to the transmission mechanism of monetary policy known as the balance sheet channel. We show how the matching model of Mortensen and Pissarides (1994)—henceforth MP—can be adapted to the interaction between firm’s balance sheets and investment creation and destruction in order to shed some light on how and to what extent an expansionary monetary policy could be less effective than a tight one. The extension of the matching framework to this new topic, as well as predicting an asymmetric result on investments, gives an explanation of the asymmetric behavior of loan interest rates following positive and negative (monetary policy) shocks. The paper is organized as follows. After a brief survey of the balance sheet channel (Section 2), we will formalize the link between balance sheets, the business cycle and the asymmetric effects of monetary policy on financial prices: an adverse shock, worsening the balance sheet position of a firm, would exacerbate a downturn (Section 3). Section 4 is devoted to some considerations on the matching model with cyclical shocks. Section 5 concludes.

The uncertainty about firms’ future financial position together with the existence of matching frictions on credit markets justifies, in our model, the presence of a premium for external finance. The lender wants to be remunerated for the loss of good alternative opportunities: in the initial bargaining process the premium coincides with the expected gain from search that the lender has to abandon once matched; when the firm’s financial position is hit by a shock that does not induce investment destruction, the share of the cash flow the firm has to give the lender, in excess of market interest rate, is a decreasing function of corporate collateral or equity, as in the traditional balance sheet literature. This last result is achieved thanks to (in our opinion) a more realistic assumption on bargaining power, no more considered fixed and exogenous, as in the Nash bargaining rule, but dependent on the position of firm’s cash flow relative to the cutoff value for investment destruction: the more distant they are, the larger the bargaining power of the firm. In the model there is an income-accelerator effect on investment: a negative shock to cash flow lowers the entrepreneur’s current collateral and this in turn raises lender’s bargaining power and so depresses investments. This framework helps explain the asymmetric effects of monetary policy both in a quantity and in a financial price perspective. The responsiveness of loan rates to money market rates is positive and equal to the bargaining power of the firm, which, in turn, depends on the level of its cash flow. During an upturn, when both net worth and firm’s bargaining power are generally high, the monetary policy will have a strong effect on the loan rate. On the contrary, during a recession, the low net worth (that leads to a decrease in the bargaining power of the firm) makes loan rates almost insensitive to a decrease in market rates. This asymmetry in financial prices is consistent with the asymmetric effects of monetary policy on real quantities: tight monetary policy in booms works better than easy monetary policy in recessions, that is the final result we get from the last part of the model; an easy monetary policy during a recession does not boost investments because of the existence of matching frictions, a tight policy, instead, destroys immediately all the investments between the old (lower) and the new (higher) cut off value. Given the assumption of investment irreversibility, the expectations of a countercyclical monetary policy suffice to generate the asymmetric result. The expectation of a tight monetary policy in a boom, that raises the rate at which future gains are discounted, makes the investment look less profitable and leads to a larger investment destruction; instead, the expectation of an easy monetary policy during a recession, improving investment’s future profitability, leads to less investment destruction but does not burst investment because, given irreversibility, the firm prefers waiting. A possible future development of the model above could consider the presence of an idiosyncratic shock even for the supplier of funds. If a balance sheet channel is present it will affect, beside the firms’ net worth, the financiers’ net worth too.31 There is a strict parallelism between making a loan by a financial institution and making an investment decision by a firm. If the level of net worth affects the behavior of firms in investing there is no reason why the level of net worth should not affect the behavior of suppliers of funds in lending.