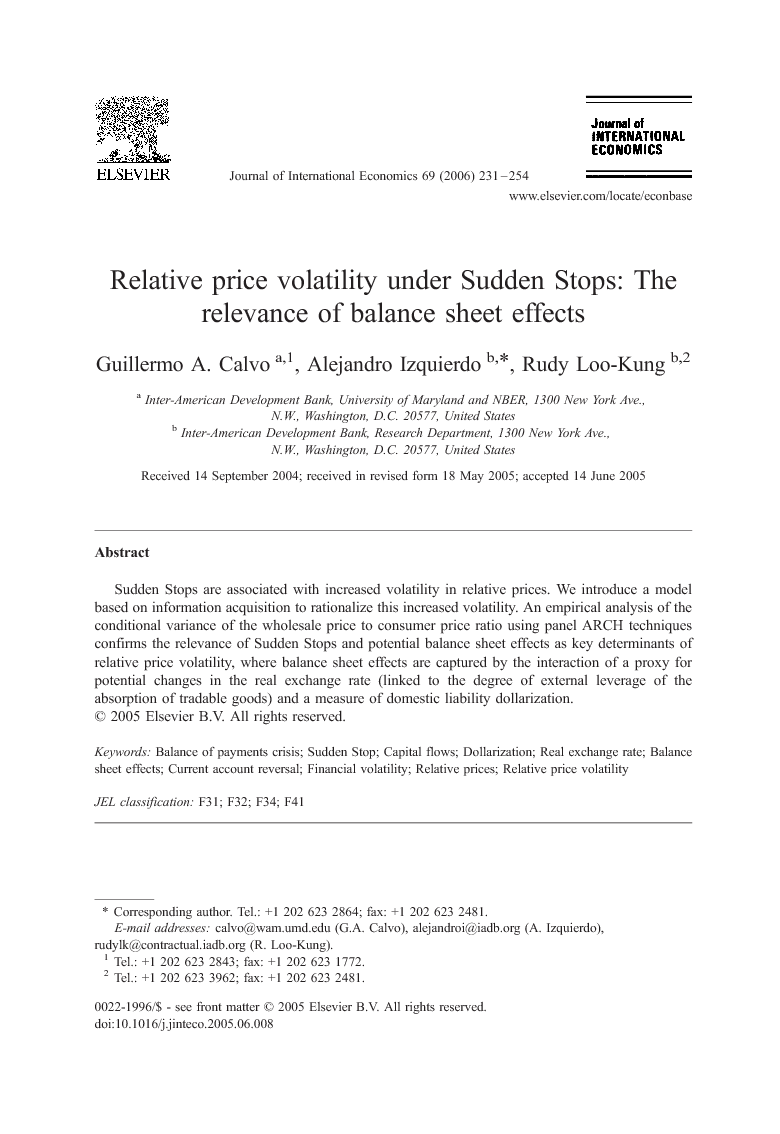 Sudden Stops are associated with increased volatility in relative prices. We introduce a model based on information acquisition to rationalize this increased volatility. An empirical analysis of the conditional variance of the wholesale price to consumer price ratio using panel ARCH techniques confirms the relevance of Sudden Stops and potential balance sheet effects as key determinants of relative price volatility, where balance sheet effects are captured by the interaction of a proxy for potential changes in the real exchange rate (linked to the degree of external leverage of the absorption of tradable goods) and a measure of domestic liability dollarization.

Using a theoretical model based on information acquisition under increased uncertainty, we rationalize why Sudden Stops and balance sheet effects may affect the variance of key relative prices such as the WPI to CPI ratio. Increased variance (due, for example, to increased correlation among investment projects during Sudden Stop episodes) spurs investors to acquire additional information, which translates into greater volatility in investment decisions and in relative prices. In a similar fashion, it can be argued that an increase in the probability of experiencing a Sudden Stop due to an increase in potential balance sheet effects implies a larger probability that asset returns will become more volatile, providing incentives to acquire better information and leading to further volatility in relative prices. Casual observation of the properties of a key relative price such as the WPI to CPI ratio, a measure of the bdomesticQ real exchange rate, suggests that Sudden Stops are associated with increases in this ratio’s volatility. In particular, major changes in volatility are associated more than 40% of the time with Sudden Stops in EMs, but rarely so in developed countries Formal empirical analysis of the determinants of the conditional variance of the WPI to CPI ratio under a family of ARCH specifications confirms that Sudden Stops, as well as potential balance sheet effects, are highly relevant in understanding sharp increases in volatility. The effects that these balance sheet factors impinge on the conditional variance of the WPI to CPI ratio are consistent with our previous finding that balance sheet effects affect the probability of experiencing a Sudden Stop, once informational aspects highlighted by our theoretical model are factored in. In the world of EMs, where contingent contracts are more fiction than fact, sharp increases in relative price volatility during a Sudden Stop could have substantial welfare effects. These results contribute to the expansion of a research program on factors affecting the volatility of relative prices, a key element that needs to be more widely understood given its relevance in the design of policies for EMs, where reduction of volatility and policymaking under high volatility rank at the top of the research agenda.