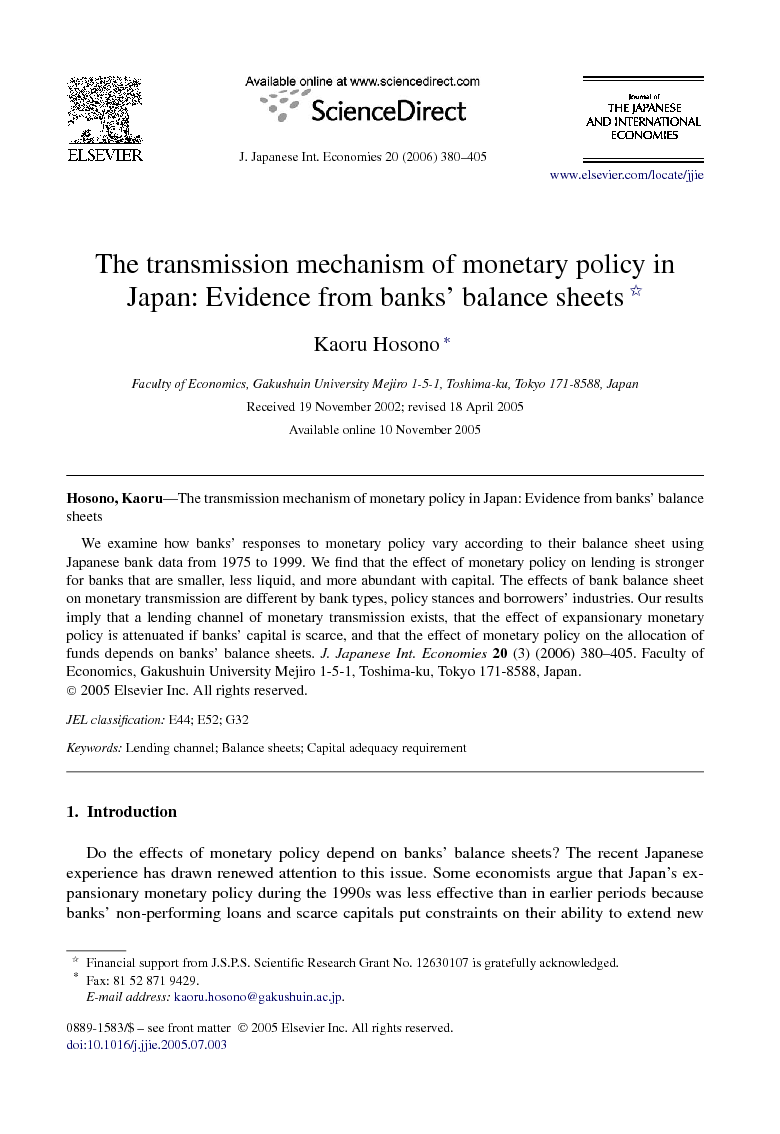 If banks face incomplete capital markets and/or are subject to capital adequacy requirements, their responses to monetary policy depend upon their balance sheet conditions. Analyzing the balance sheet data of Japanese banks from 1975 to 1999, we found that the effect of monetary policy on lending is stronger for banks that are smaller, less liquid, and more abundant with capital, though the results for liquidity are somewhat less robust than those for size and equity. Banks’ responses are asymmetric between contractionary and expansionary policy stances: Liquidity is significant to monetary transmission in times of contractionary policies, while capital is significant in times of expansionary policies. During the banking crisis in the late 1990s, expansionary monetary policy relaxed the liquidity constraints of illiquid banks and promoted lending by these banks. Estimation results of loans by borrowing firms’ industry revealed that bank capital is significant to monetary transmission to the manufacturing sector. The implications of our results are as follows. First, a lending channel of monetary transmission exists. The difference in banks’ balance sheets makes an economically significant difference in responses to monetary policy. Second, the effect of expansionary monetary policy is attenuated if banks’ capital is scarce. The “bank-lending view” itself usually implies that well-capitalized banks are prone to asymmetric information problems and hence less sensitive to monetary policy shocks. But our finding that well-capitalized banks are more sensitive to monetary policy shocks, especially to expansionary shocks, suggest that capital ratios constrain banks’ loan extension under expansionary policies rather than attenuate information problems such as moral hazard or adverse selection problems. Finally, the effects of monetary policy on the allocation of funds depend upon banks’ balance sheets. Expansionary monetary policy decreases the relative share of loans to manufacturing industries if banks are less capitalized. Japanese banks’ financing patterns do not seem to have changed much after the end of our sample period, 1999. Whether or not and how bank financing and hence monetary transmission will change in the future depends on various factors, including further progress of deregulation, movements of interest rates, and reorganization of the banking industry.