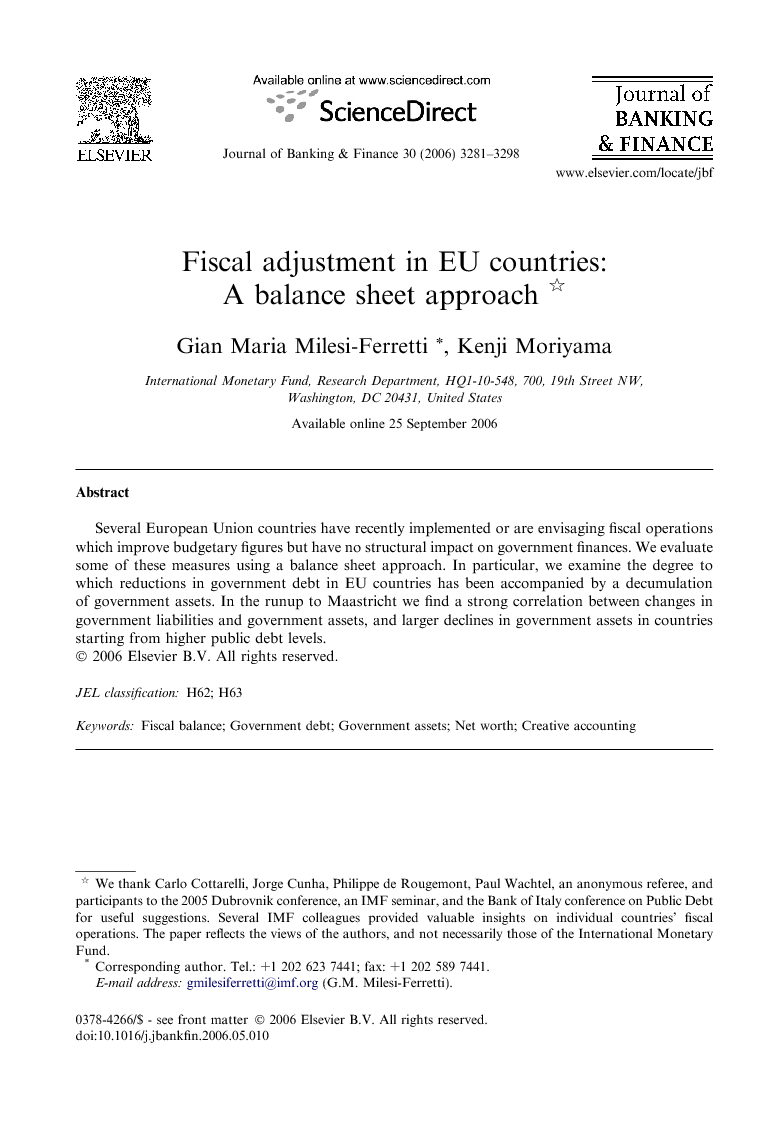 Several European Union countries have recently implemented or are envisaging fiscal operations which improve budgetary figures but have no structural impact on government finances. Anecdotal evidence suggests that these ‘nonstructural’ measures, ranging from securitization of government assets to the transfer of expenditures off-budget, have not been used so actively since the runup to Maastricht of 1997, and have cast doubts on the effectiveness of the fiscal constraints inherent in the Stability and Growth Pact (SGP).1 This paper evaluates the evolution of public finances in EU countries using a balance sheet approach, which reconciles budgetary flows with changes in the underlying stocks of government assets and liabilities. Because a number of ‘nonstructural’ fiscal operations adopted in EU countries involve asset transactions, their proper evaluation requires tracking the evolution of government assets in parallel to the evolution of liabilities. More generally, this approach allows to investigate the degree to which changes in the size of public debt in EU countries over the last decade reflect corresponding changes in net worth. A privatization operation for example, reduces the size of the public sector and can be efficiency-enhancing. However, an improvement in net worth, and not just a symmetric reduction of both public assets and liabilities, is needed if the objective is to finance a reduction in future taxation or make room for an increase in future spending needs. Distinguishing between these two types of debt reduction is clearly important in order to assess the sustainability of public finances. Economists have debated for a long time advantages and shortcomings of various indicators of government accounts, as well as the appropriate definition of the public sector.2 In particular, the literature has emphasized that ‘traditional’ fiscal indicators, such as the fiscal balance and general government debt, may offer an incomplete picture of government fiscal operations because they do not reflect the evolution of government assets (in addition to government liabilities); fiscal and quasi-fiscal operations taking place outside the domain of the general government; future contractual and noncontractual obligations of the government (such as pension liabilities); and contingent liabilities. More generally, the intertemporal budget constraint, by explicitly taking into account policy measures that affect future tax receipts or spending would clearly provide the most comprehensive measure of public accounts. A balance sheet approach that takes into account future government obligations has been recommended, among others, by Buiter (1983). While it can potentially address issues arising from all of the ‘critical areas’ mentioned above, the approach adopted in this paper focuses more modestly on the current government balance sheet, rather than on its future spending commitments. The public finance literature has emphasized that the incentive to use ‘nonstructural’ fiscal measures – often described as ‘creative accounting’ – may increase in the presence of fiscal rules (Milesi-Ferretti, 2003), but empirical work in this area is hampered by measurement problems, and has mostly focused on US states.3 An exception is Easterly (1999), who argues that fiscal adjustment in a number of developing countries with World Bank and IMF programs was illusory, since relied heavily on running down government assets (primarily cutting public investment and expenditure on operations and maintenance). Two very recent exceptions are von Hagen and Wolff, in press and Koen and van den Noord, 2005. The former find that the SGP rules have induced governments to use creative accounting (proxied by differences between the fiscal balance and changes in public debt), to hide deficits, and particularly so for the cyclical component of the deficit. The latter use logit regression analysis to show that recourse to creative accounting is more likely when deficit rules become more binding. This paper provides direct evidence on whether changes in general government debt in EU countries are accompanied by changes in the opposite direction in government assets, as models of creative accounting suggest. In the remainder of the paper, Section 2 explains the link between net worth, the fiscal balance, and government debt; Section 3 classifies ‘nonstructural’ fiscal measures in broad categories, and discusses some recent examples taken from European Union countries; Section 4 compares changes in government debt with underlying changes in government net worth; and Section 5 concludes.