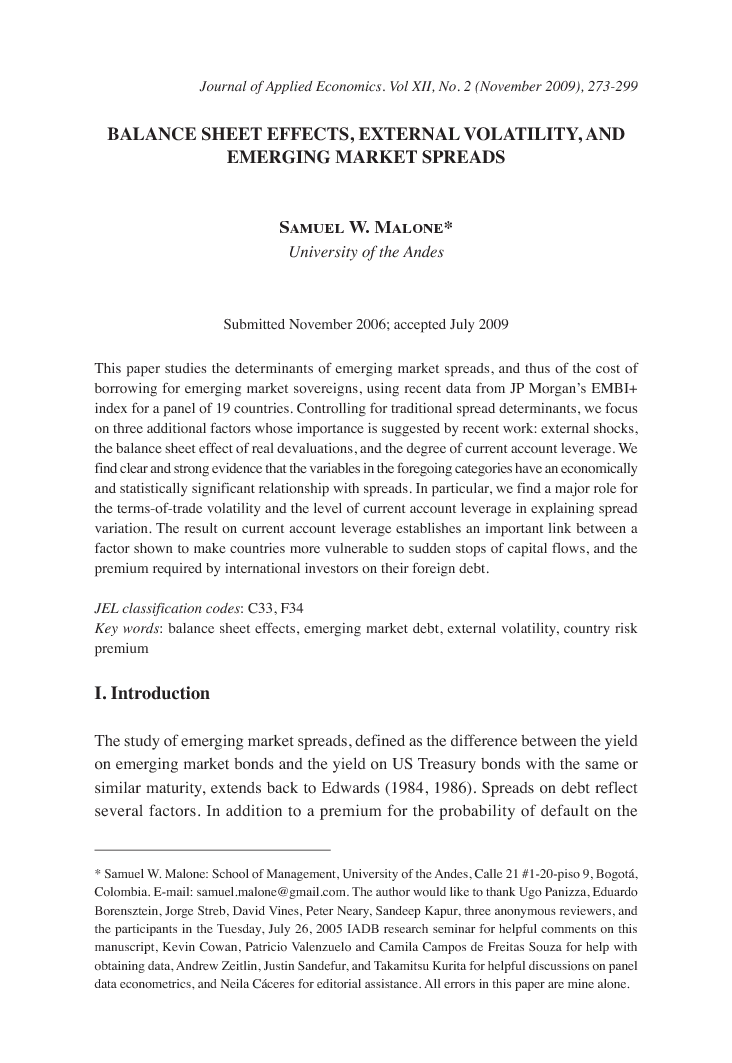 This paper studies the determinants of emerging market spreads, and thus of the cost of borrowing for emerging market sovereigns, using recent data from JP Morgan's EMBI+ index for a panel of 19 countries. Controlling for traditional spread determinants, we focus on three additional factors whose importance is suggested by recent work: external shocks, the balance sheet effect of real devaluations, and the degree of current account leverage. We find clear and strong evidence that the variables in the foregoing categories have an economically and statistically significant relationship with spreads. In particular, we find a major role for the terms-of-trade volatility and the level of current account leverage in explaining spread variation. The result on current account leverage establishes an important link between a factor shown to make countries more vulnerable to sudden stops of capital flows, and the premium required by international investors on their foreign debt.

In this study, we have identified an important role for three additional variables largely absent in the pre-2003 literature on emerging market spreads, and shown them to be robust to a variety of alternative specifications. These variables were the terms-of-trade volatility, recently emphasized in studies by Catão and Kapur (2006) and Hilscher and Nosbusch (2007), and two variables measuring the strength of the balance sheet effects impacting the country. The first balance sheet variable, labeled CA_leverage, is adapted from Calvo, Izquierdo, and Mejia (2004) and measures the degree of current account leverage, calculated as the percentage of import purchases that would have to be forgone in the event of a sudden stop of current account financing. The second balance sheet variable, labeled currency_mismatch, was adapted from the study of Berganza, Chang, and García- Herrero (2004) and measures the impact of the effect of real exchange rate shocks on the foreign debt service burden. We find that an increase in the 10-year rolling terms-of-trade volatility by one sample standard deviation corresponds to an increase in the EMBI+ spread on the order of 39%-41%. This finding is fairly robust across alternative specifications of the regression, and lends support to the claim that a country’s terms-of-trade volatility is a highly significant factor in affecting the premium it must pay to borrow in international debt markets. In particular, the impact on spreads of having a termsof- trade volatility measure one standard deviation higher than the average for the emerging market countries considered in our study is significantly higher than having, for example, a debt-to-income ratio that is one standard deviation higher than the sample average. In the latter case, the predicted rise in spreads is only 16.6%, and the debt-to-GDP measure is not robust to some alternative specifications, such as the inclusion of country fixed effects. The inclusion of a previously unstudied spread determinant in our regressions, the degree of current account leverage, reveals that countries in which sudden stops of current account financing would require more painful contractions of import purchases, other things equal, are likely to face higher spreads. This finding supports the conclusion that balance sheet problems that magnify the adverse effects of abrupt reversals in capital inflows also impact sovereign risk, because foreign currency is fungible for both import purchases and external debt service. In this way, we connect the literature on sudden stops and emerging market spreads via the common denominator of balance sheet effects. Complementing the study by Berganza, Chang, and García-Herrero (2004), we test the effect of changes in the real exchange rate on the cost of borrowing faced by emerging markets, both directly and via its interaction with the ratio of debt service-to-income. We find that, for sufficiently low debt service burdens, real devaluations lower spreads, but for high debt service burdens, real devaluations raise spreads. The break even debt service-to-income ratio above which the balance sheet effects of real devaluations, in terms of a higher cost of debt in local currency terms, begins to outweigh the beneficial effect on net exports is approximately 5.32%. Our findings have several policy implications. First, while efforts to reduce the terms-of-trade volatility are likely to require long-term structural changes in the economy, which may or may not be desirable, or possible, for a variety of reasons, there may be other solutions available for reducing the impact of this important variable on spreads. It may be possible, for example, for a country to hedge some portion of its income by hedging the prices of the goods and/or commodities that it exports or imports. This strategy would be particularly useful for a large seller (or buyer) of commodities, such as Venezuela or Mexico in the case of oil. Hilscher and Nosbusch (2007) note, similarly, the potential benefits to countries of managing commodity price volatility, in terms of lower spreads and lower probabilities of default on sovereign debt. Whereas external volatility may be difficult to control in the short run, the structure of the economy’s balance sheet affects how external shocks impact the risk of default, and governments may have more scope for controlling vulnerabilities in the national balance sheet in the short and medium term. With respect to the two balance sheet factors we consider in our study, it may be possible to decrease current account leverage by decreasing debt service, for example through the use of debt management policies, and to reduce the balance sheet effects of devaluations via a shift towards debt denominated in domestic currency. Although domestic debt has played and continues to play an important role in sovereign finance, as demonstrated forcefully in recent work by Reinhart and Rogoff (2008), it is also true that the ability of governments to erode the value of domestic currency debt through inflation may present additional costs to the issuing government, as discussed by those authors as well as others, such as Gray and Malone (2008) in the context of structural models of sovereign credit risk with senior and subordinate debt. Understanding the net impact of such factors on the total cost of sovereign borrowing continues to serve as an interesting topic for ongoing research