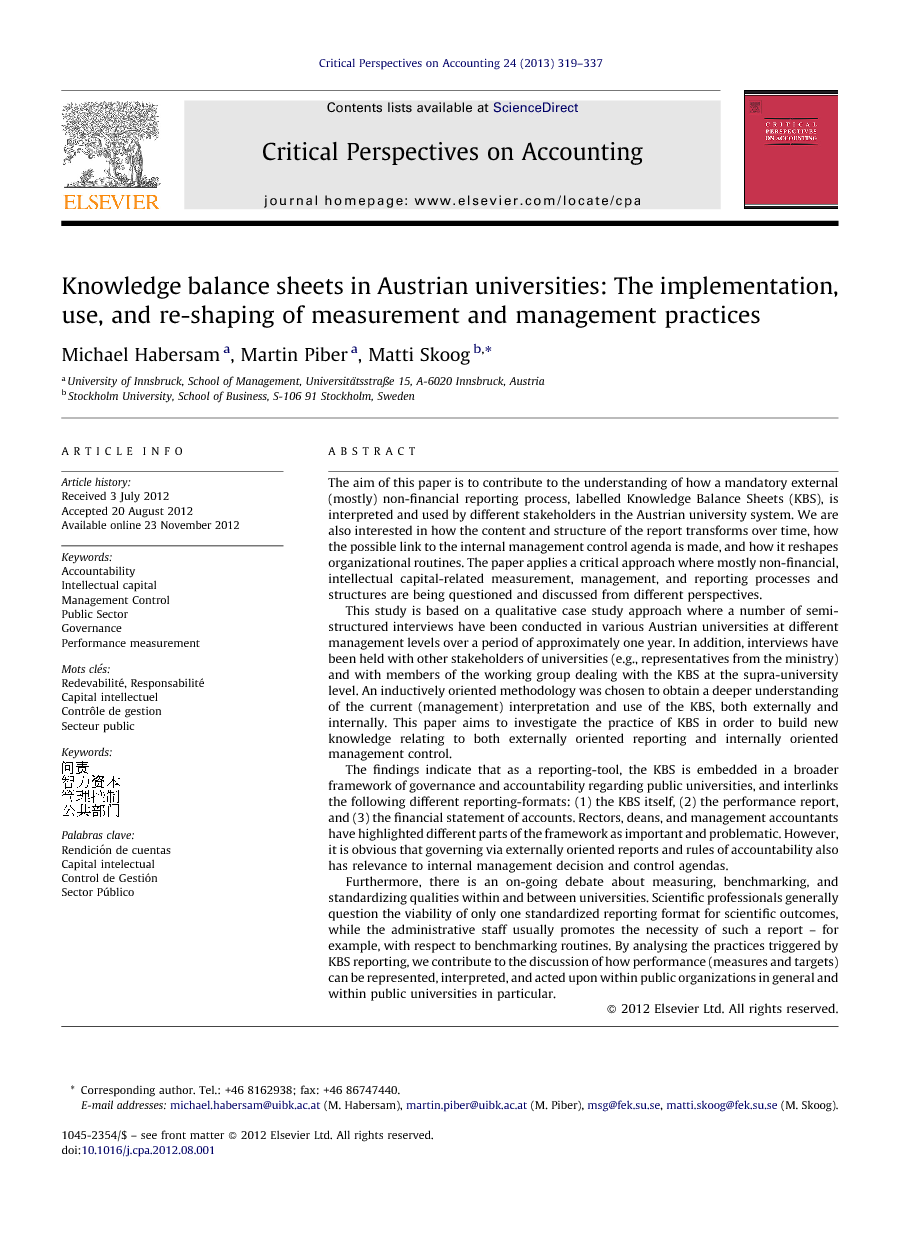 The aim of this paper is to contribute to the understanding of how a mandatory external (mostly) non-financial reporting process, labelled Knowledge Balance Sheets (KBS), is interpreted and used by different stakeholders in the Austrian university system. We are also interested in how the content and structure of the report transforms over time, how the possible link to the internal management control agenda is made, and how it reshapes organizational routines. The paper applies a critical approach where mostly non-financial, intellectual capital-related measurement, management, and reporting processes and structures are being questioned and discussed from different perspectives. This study is based on a qualitative case study approach where a number of semi-structured interviews have been conducted in various Austrian universities at different management levels over a period of approximately one year. In addition, interviews have been held with other stakeholders of universities (e.g., representatives from the ministry) and with members of the working group dealing with the KBS at the supra-university level. An inductively oriented methodology was chosen to obtain a deeper understanding of the current (management) interpretation and use of the KBS, both externally and internally. This paper aims to investigate the practice of KBS in order to build new knowledge relating to both externally oriented reporting and internally oriented management control. The findings indicate that as a reporting-tool, the KBS is embedded in a broader framework of governance and accountability regarding public universities, and interlinks the following different reporting-formats: (1) the KBS itself, (2) the performance report, and (3) the financial statement of accounts. Rectors, deans, and management accountants have highlighted different parts of the framework as important and problematic. However, it is obvious that governing via externally oriented reports and rules of accountability also has relevance to internal management decision and control agendas. Furthermore, there is an on-going debate about measuring, benchmarking, and standardizing qualities within and between universities. Scientific professionals generally question the viability of only one standardized reporting format for scientific outcomes, while the administrative staff usually promotes the necessity of such a report – for example, with respect to benchmarking routines. By analysing the practices triggered by KBS reporting, we contribute to the discussion of how performance (measures and targets) can be represented, interpreted, and acted upon within public organizations in general and within public universities in particular.