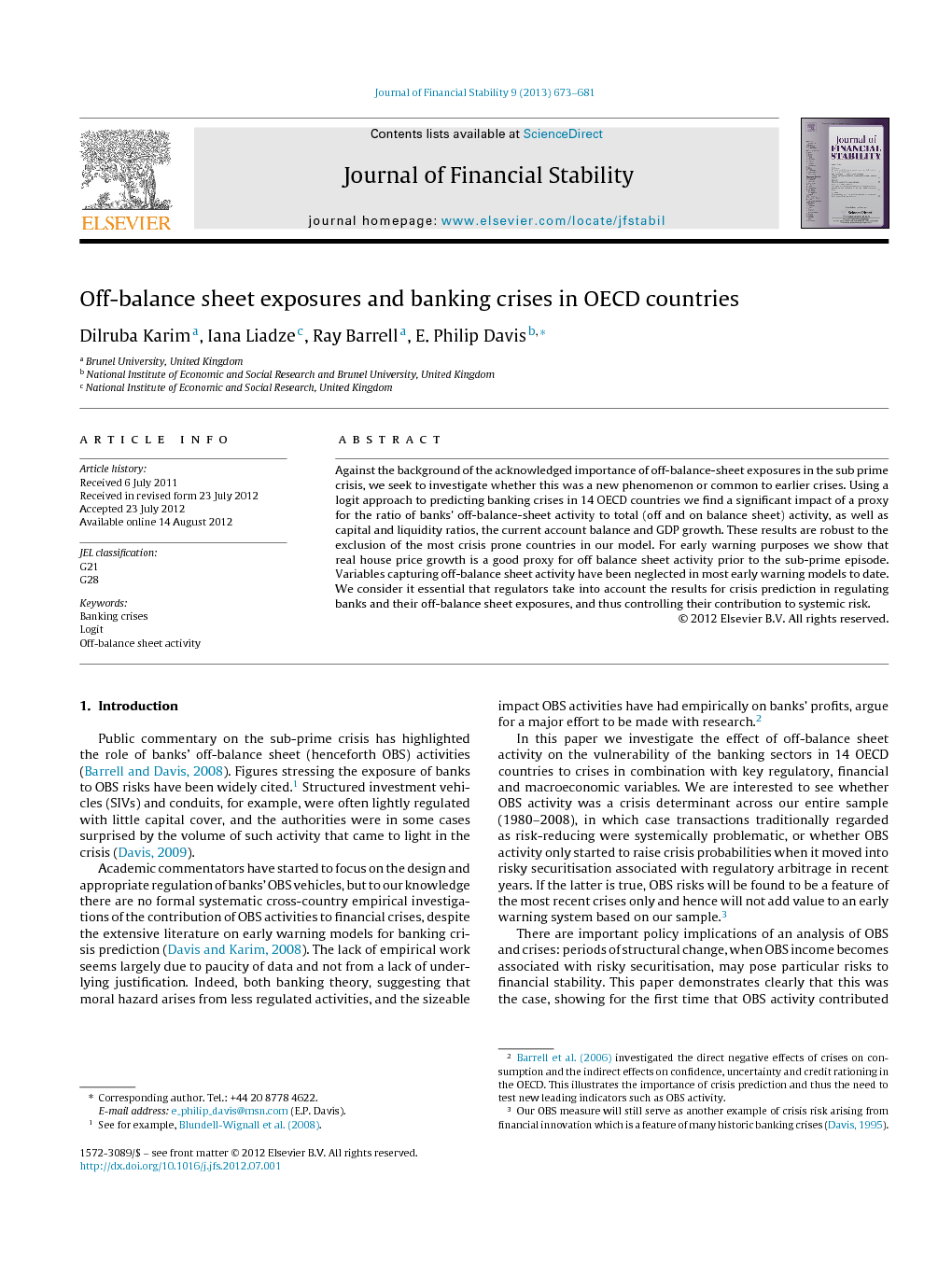 Against the background of the acknowledged importance of off-balance-sheet exposures in the sub prime crisis, we seek to investigate whether this was a new phenomenon or common to earlier crises. Using a logit approach to predicting banking crises in 14 OECD countries we find a significant impact of a proxy for the ratio of banks’ off-balance-sheet activity to total (off and on balance sheet) activity, as well as capital and liquidity ratios, the current account balance and GDP growth. These results are robust to the exclusion of the most crisis prone countries in our model. For early warning purposes we show that real house price growth is a good proxy for off balance sheet activity prior to the sub-prime episode. Variables capturing off-balance sheet activity have been neglected in most early warning models to date. We consider it essential that regulators take into account the results for crisis prediction in regulating banks and their off-balance sheet exposures, and thus controlling their contribution to systemic risk.

Public commentary on the sub-prime crisis has highlighted the role of banks’ off-balance sheet (henceforth OBS) activities (Barrell and Davis, 2008). Figures stressing the exposure of banks to OBS risks have been widely cited.1 Structured investment vehicles (SIVs) and conduits, for example, were often lightly regulated with little capital cover, and the authorities were in some cases surprised by the volume of such activity that came to light in the crisis (Davis, 2009). Academic commentators have started to focus on the design and appropriate regulation of banks’ OBS vehicles, but to our knowledge there are no formal systematic cross-country empirical investigations of the contribution of OBS activities to financial crises, despite the extensive literature on early warning models for banking crisis prediction (Davis and Karim, 2008). The lack of empirical work seems largely due to paucity of data and not from a lack of underlying justification. Indeed, both banking theory, suggesting that moral hazard arises from less regulated activities, and the sizeable impact OBS activities have had empirically on banks’ profits, argue for a major effort to be made with research.2 In this paper we investigate the effect of off-balance sheet activity on the vulnerability of the banking sectors in 14 OECD countries to crises in combination with key regulatory, financial and macroeconomic variables. We are interested to see whether OBS activity was a crisis determinant across our entire sample (1980–2008), in which case transactions traditionally regarded as risk-reducing were systemically problematic, or whether OBS activity only started to raise crisis probabilities when it moved into risky securitisation associated with regulatory arbitrage in recent years. If the latter is true, OBS risks will be found to be a feature of the most recent crises only and hence will not add value to an early warning system based on our sample.3 There are important policy implications of an analysis of OBS and crises: periods of structural change, when OBS income becomes associated with risky securitisation, may pose particular risks to financial stability. This paper demonstrates clearly that this was the case, showing for the first time that OBS activity contributed significantly to crisis probabilities after 2003. Expanding on our earlier work (Barrell et al., 2010a and Barrell et al., 2010b), we test this proposition on the banking sectors of Belgium, Canada, Denmark, Finland, France, Germany, Italy, Japan, Netherlands, Norway, Spain, Sweden, the UK and the US.4 The paper is structured as follows. Section 2 provides background on the importance of OBS activity in the recent crisis and introduces measures of off-balance sheet exposures for OECD country banking sectors. Section 3 introduces the literature on banking crisis prediction and considers additional variables employed to predict crises. Section 4 covers the estimation and analyses the results of a logit model of the determinants of banking crisis probabilities that includes OBS. Section 5 discusses forecasting crises with logit models and Section 6 concludes.

The change in the nature of off balance sheet activity after 2003from risk diversification towards regulatory arbitrage driven secu-ritisation is widely believed to have left banks without sufficientcapital to cover the risks they were facing. This paper demonstratesclearly that this was the case, showing for the first time that offbalance sheet activity contributed significantly to crisis probabili-ties after 2003. However, it is not clear that this variable could havebeen used in an early warning system to call the subprime crisis, butmovements in house prices are found to Granger cause our off bal-ance sheet indicator and hence it is possible to substitute this intoa warning system prior to 2006. If we do so we show that it wouldhave been relatively easy to call the subprime crisis in advance, andpolicy may have reacted. Going forward it is clear that policy mak-ers should keep a close eye on financial innovations that change thestructure of bank portfolios. It appears to be the case that before2003 off balance sheet activity had no effect on increasing risk, andmay have had a risk reducing effects, which were lost because ofinnovation and inadequate regulatory attention.Regulation more generally needs to respond to the risks posedby OBS activities, with controls needed at a macroprudential as wellas a microprudential level. Reducing the scale and complexity ofOBS activity may be essential, and there are several ways to do this.Registers and clearing houses may make certain OBS activities moretransparent and easier to provision against (IMF, 2009). Requiringmandatory holdings or recourse on securitised assets may also bebeneficial. Taxation or clearing houses to ensure registration of OTCderivatives might also be considered (see Barrell and Weale (2010),Singh (2010)). Of course other problems may emerge and financialinnovations may get round new regulations, as Goodhart (2008)discusses. Hence there is a need for continuous monitoring andadaptation of regulation of banks and financial markets.Overall, our findings can be considered as a step towards quan-tifying the effect OBS activity has on the probability of a crisisoccurring, as well as in overall crisis prediction. Further investi-gation in this area can be conducted once more detailed data areavailable, which will allow researchers to adjust banks liquidityand leverage ratios for the size of the OBS exposures directly andtest for an impact on crisis probabilities more precisely. Given howessential such calculations are, we would suggest direct regulatoryaction (to produce that data) would be wise.