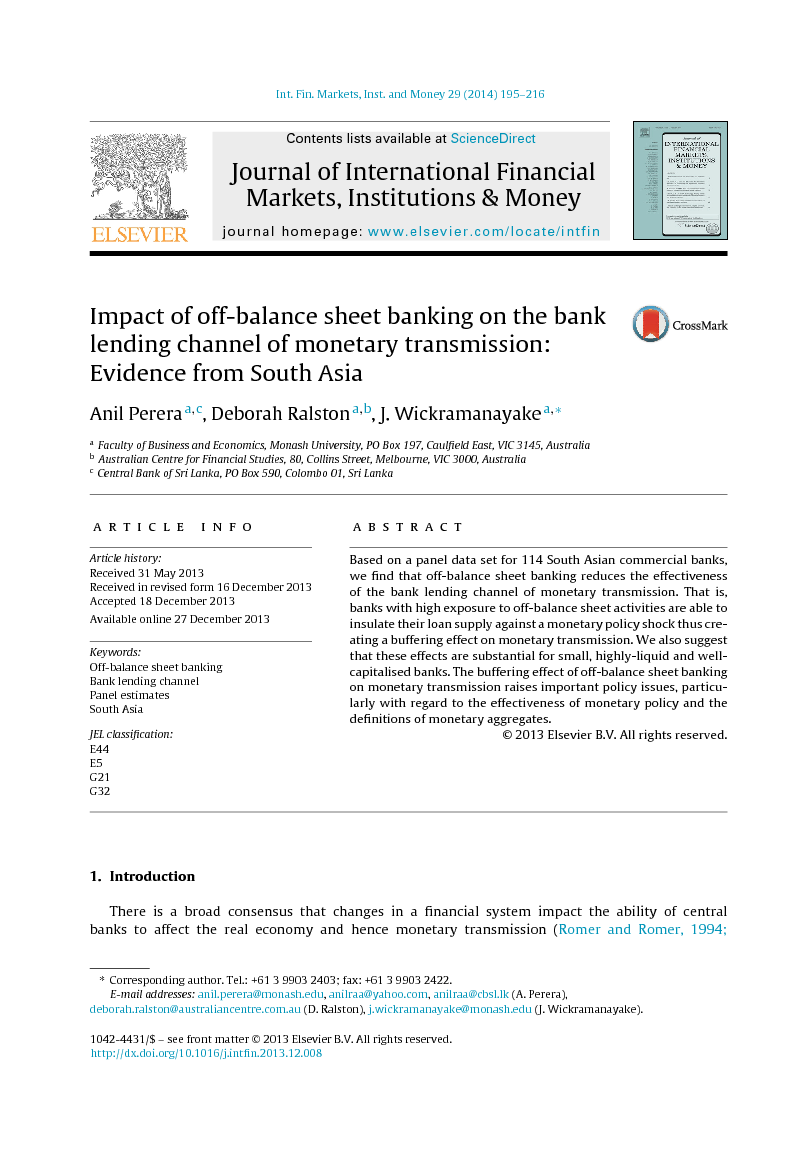 There is a broad consensus that changes in a financial system impact the ability of central banks to affect the real economy and hence monetary transmission (Romer and Romer, 1994, Boivin et al., 2010 and Aysun and Hepp, 2011). In particular, it is argued that financial sector reforms and changes including financial deregulation, innovation, competition lead to transformations in the credit and banking markets and as a result, monetary transmission, mainly through the credit channel, may have altered to a greater extent (Altunbaş et al., 2009 and Olivero et al., 2011a). Amongst various changes in the credit and banking markets, decline in traditional banking activity (decline of banks’ share of total financial intermediary assets), that is ‘financial disintermediation’, raises important policy issues with regard to macroeconomic management and central banking (Flannery, 1989 and Edwards and Mishkin, 1995). Whilst financial disintermediation occurs in different forms of activity such as participating in capital markets and providing non-financial services by banks, off-balance sheet (OBS, hereafter) banking is considered one of the major forms of non-traditional banking activities.3 These OBS banking facilities provide liquidity to bank customers and remain a substitute for on-balance sheet liquidity. As a result, the relationships between money, interest rates and other variables of concern to policy makers could be weakened (Glick and Plaut, 1989). In particular, such non-traditional activities could weaken the particular channels of monetary transmission (Altunbaş et al., 2009). Given this background, we attempt to empirically examine the impact of OBS banking on the effectiveness of monetary policy transmission, specifically focusing on the bank lending channel in the emerging country context. To our knowledge, this is the first study to examine whether OBS banking manifests in higher growth in bank lending activity and creates a buffering effect on the impact of monetary policy actions via the bank lending channel of monetary transmission. This empirical exposition is motivated by several reasons. First, despite the consensus on the impact of financial disintermediation on monetary policy, so far, only a limited number of studies have been conducted in this area and they reported mixed evidence.4 However, as these studies are generally limited to credit commitments and securitisation, our study intends to focus on the entire OBS portfolio including the impact of other OBS facilities such as guarantees, acceptances and other contingent liabilities.5 Second, the bank lending channel is a much debated and discussed segment of the monetary transmission mechanism and hence receives considerable attention in policy deliberations (Brissimis and Delis, 2009 and Disyatat, 2011). In particular, banks play a special role in transmitting monetary policy impulses through the bank lending channel (Disyatat, 2011 and Olivero et al., 2011a), however the significance of their role has changed with financial developments over time (Brissimis and Delis, 2009). Hence, it is worthwhile to examine the role played by banks in transmitting monetary policy in the presence of OBS banking as these OBS banking practices allow banks to smooth the impact of monetary policy changes. Third, emerging country financial sectors have undergone substantial changes during recent decades (Brissimis and Magginas, 2005). It is believed that these developments may have important implications for monetary transmission process in emerging countries.6 In particular, a substantial surge is observed in financial disintermediation and OBS banking in emerging countries in recent times (Oh, 1997 and Nachane and Ghosh, 2007), and those developments may have had significant effects on macroeconomic management and monetary policy conduct in emerging countries. Thus, motivated by the aforementioned arguments, our study intends to answer the central proposition, ‘to what extent does off-balance sheet banking impact on the effectiveness of the monetary transmission mechanism?’ As such, we test whether OBS banking activity amplifies or reduces the impact of monetary policy shocks via the bank lending channel using annual bank-level income statement and balance sheet data for 114 domestic commercial banks operating in key South Asian countries: Bangladesh, India, Pakistan and Sri Lanka. 7 Our empirical methodology is based on previous studies of the bank lending channel (for example, Altunbaş et al., 2002, Altunbaş et al., 2009, Mateut et al., 2006, Aysun and Hepp, 2011, Olivero et al., 2011a, Olivero et al., 2011b and Wu et al., 2011), that follow the framework suggested by Kashyap and Stein (1995) and Ashcraft (2006). Employing the standard, as well as dynamic panel estimation methods, our study suggests that banking OBS activity weakens the bank lending channel of monetary transmission providing some important policy implications for monetary authorities. These results suggest that monetary authorities need to focus on how monetary policy could be suitably adjusted to account for the additional liquidity resulting from OBS banking facilities. Also, the results suggest that monetary authorities need to pay more attention to OBS liquidity when defining monetary aggregates and choosing targets for monetary policy. The remainder of the paper is structured as follows: Section 2 conceptualises OBS banking and discusses the relevant theoretical underpinnings and empirical evidence related to OBS banking and monetary policy. In Section 3, research design is discussed including sample selection, models and econometric methodology. Section 4 presents the results and the analysis of findings while Section 5 is devoted to a discussion of the conclusions and policy implications.