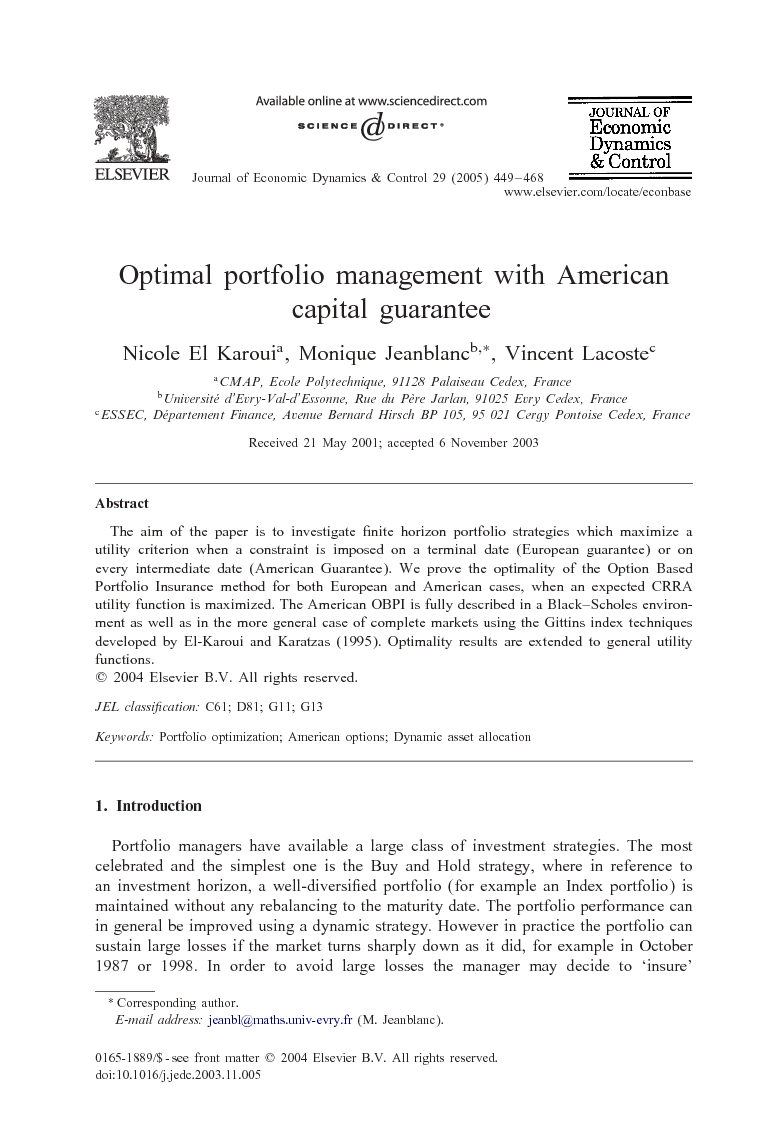 The aim of the paper is to investigate finite horizon portfolio strategies which maximize a utility criterion when a constraint is imposed on a terminal date (European guarantee) or on every intermediate date (American Guarantee). We prove the optimality of the Option Based Portfolio Insurance method for both European and American cases, when an expected CRRA utility function is maximized. The American OBPI is fully described in a Black–Scholes environment as well as in the more general case of complete markets using the Gittins index techniques developed by El-Karoui and Karatzas (1995). Optimality results are extended to general utility functions.

Portfolio managers have available a large class of investment strategies. The most celebrated and the simplest one is the Buy and Hold strategy, where in reference to an investment horizon, a well-diversified portfolio (for example an Index portfolio) is maintained without any rebalancing to the maturity date. The portfolio performance can in general be improved using a dynamic strategy. However in practice the portfolio can sustain large losses if the market turns sharply down as it did, for example in October 1987 or 1998. In order to avoid large losses the manager may decide to ‘insure’ a specified-in-advance minimum value for the portfolio, which results in the sacrifice of potential gains. There may be constraints which require that the liquidation value of the portfolio never drops below a certain threshold during the life of the contract. The problem of portfolio selection is of both theoretical and practical interest. Leland and Rubinstein (1976) introduced the concept of Option Based Portfolio Insurance based on dynamic replication using either synthetic options or traded options. Subsequently, Black and Jones (1987) and Perold and Sharpe (1988) developed automated strategies including the Constant Proportion Portfolio Insurance method1 which has become popular with practitioners. Both these approaches guarantee that the current portfolio value dominates the discounted value of the pre-specified final floor. More generally, practitioners have well understood the separation principle which was introduced by Markowitz (1959) and extended by Merton 1971 and Merton 1973: the asset allocation is made optimal through the use of two separate funds, the first one being a combination of basic securities, the second one being the money market account. Later papers (see for example Cox and Huang, 1989) have extended this result to the three fund separation principle, when an extra insurance is required by the investor. A third fund is added to the basic Markowitz portfolio corresponding to a derivative which is based on the portfolio of risky securities. The OBPI method is an application of such a separation principle. More recently, various authors have proposed dynamic fund strategies in the case of American protection (see Gerber and Pafumi, 2000; Imai and Boyle, 2001). The main results of the present paper are first to extend the three fund separation principle to an American constraint and second to fully describe the optimal dynamic portfolio in a general framework. Throughout the paper, we follow the methodology developed by El-Karoui and Jeanblanc (1998) who derive the optimal wealth under a non-negativity constraint for an investor receiving an income. Their work, as well as ours, is set in a complete market framework. Other related papers are Grossman and Zhou (1993) and Cvitanić and Karatzas (1996) where the lower bound for the investor's wealth at time t is a fraction of its maximum value over time [0,t]. Cvitanić and Karatzas (1999) also study the European constraint where the final wealth satisfies lower bounds for a given level of probability. In our paper, the investor chooses in the first step an unconstrained (or uninsured) allocation using traded assets and without taking care of the guarantee. In the second step, he insures his portfolio by specifying a dynamic strategy which we call the insured allocation. Our unconstrained allocation is related to but not equivalent to the tactical allocation introduced by Brennan et al. (1997). In Brennan et al., “the tactical asset allocation is essentially a myopic strategy” and is static. We emphazise that, in our framework, the unconstrained allocation might be a dynamic strategy, depending on the form of the utility function to be maximized. We also prove that the choice of our insured allocation is optimal among all strategies which satisfy the guarantee. The paper is organized as follows: the second section presents the classical OBPI method and focuses on the maximization of an expected utility criterion, over all self-financing strategies whose value satisfies a European constraint. The Put Based Strategy (referred to as the insured allocation) written on the optimal portfolio solving the unconstrained problem is shown to be optimal for CRRA utility functions. In such a case, the three fund separation principle appears to be strictly valid. The third section extends the OBPI method for the fund to satisfy an American rather than a European constraint: the strategy is then based on American put options. In order to remain self-financing, we introduce a path dependent gearing parameter which specifies the current nominal amount to be invested in the unconstrained allocation. This path dependent parameter is shown to optimally increase when the value of the tactical allocation drops below a given exercise boundary. The analysis is conducted within a Black–Scholes environment. The fourth section extends the latter result to the more general case of complete markets using the properties of American options developed by El-Karoui and Karatzas (1995) using the Gittins index methodology. The optimality of the strategy is then proven for a CRRA utility function criterion. In the fifth section, we extend our optimality results to a general class of utility functions. It is shown that despite the non-linearity of the unconstrained optimal portfolio with respect to the initial wealth, the OBPI is still optimal, but the unconstrained allocation to be insured is changed depending on the initial cost of the protection. Throughout the paper we assume a framework of complete, arbitrage free, frictionless markets.

The present paper solves the problem of optimizing dynamic portfolio management when a constraint is imposed on the liquidation value. We first considered the simplest situation where the utility maximization problem is linear with respect to the initial wealth and the unconstrained allocation is driven by Black–Scholes dynamics. We then moved from this simple case to more complex settings, first extending our results to the general framework of complete markets, and then considering general utility functions to be maximized. Both European and American constraints are studied. In particular, we developed in the American case a path dependent self financing strategy based on American puts, which we showed to be optimal under fairly general assumptions.