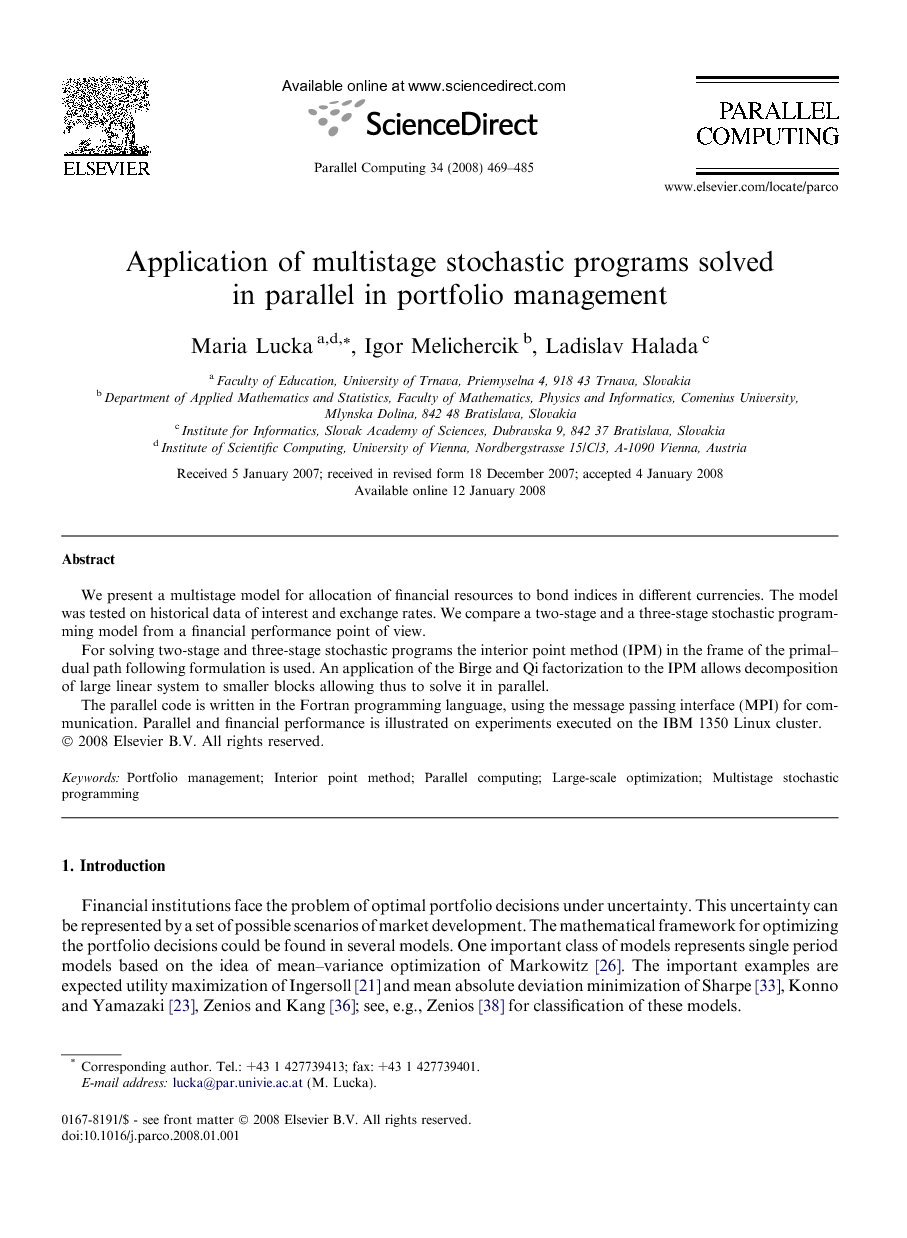 We present a multistage model for allocation of financial resources to bond indices in different currencies. The model was tested on historical data of interest and exchange rates. We compare a two-stage and a three-stage stochastic programming model from a financial performance point of view. For solving two-stage and three-stage stochastic programs the interior point method (IPM) in the frame of the primal–dual path following formulation is used. An application of the Birge and Qi factorization to the IPM allows decomposition of large linear system to smaller blocks allowing thus to solve it in parallel. The parallel code is written in the Fortran programming language, using the message passing interface (MPI) for communication. Parallel and financial performance is illustrated on experiments executed on the IBM 1350 Linux cluster.

Financial institutions face the problem of optimal portfolio decisions under uncertainty. This uncertainty can be represented by a set of possible scenarios of market development. The mathematical framework for optimizing the portfolio decisions could be found in several models. One important class of models represents single period models based on the idea of mean–variance optimization of Markowitz [26]. The important examples are expected utility maximization of Ingersoll [21] and mean absolute deviation minimization of Sharpe [33], Konno and Yamazaki [23], Zenios and Kang [36]; see, e.g., Zenios [38] for classification of these models. Recently, an interest in the development of multiperiod models of bond portfolio management has been observed. At this place we refer to successful and valuable contributions of Bradley and Cane [7], Kusy and Ziemba [24], Dupačová [11], Dantzig and Infanger [10], Mulvey [28], Hiller and Eckstein [19], Zenios [37], Carino et al. [8], Golub et al. [13], Frauendorfer and Schürle [12]. In Holmer et al. [20] a multiperiod dynamic model for fixed-income portfolio management under uncertainty, using multistage stochastic programming was developed. The scenarios of term structure development were obtained by Monte Carlo simulations. Their results confirmed that multiperiod models outperform single period ones. A multiperiod dynamic model for international bond portfolios was formulated in Beltratti et al. [3]. In [18] we formulated a model for allocation of financial resources to bond indices in different currencies. Such portfolios are the subject to an interest rate risk and an exchange rate risk. The stochastic properties of possible future development of exchange rates and interest rates are represented in the form of a scenario tree. The objective is to maximize the expected value of the portfolio at the defined time horizon. Mathematically, such models lead to the multistage stochastic programming. When one deals with several currencies, the number of scenarios per stage should be sufficient to model the randomness of interest rates in each currency and all exchange rates. Therefore, the realistic trees are “bushy” and the number of scenarios grows exponentially with the number of stages. The computation of such problems could be extremely large and computationally intractable. Therefore, the parallel computing of such large size problem is preferred. Many studies have been published on how stochastic programming algorithm can be parallelized, such as [25], [29], [31], [9], [34] and [35]. We have used the interior point method in the frame of primal–dual path following formulation, due to a good possibility for parallelization. Moreover, the recursive structure of the constraint matrices for two and three stage problems and their Birge and Qi (BQ) factorization has been exploited for modular and independent computation. We have used the factorization technique based on the work of Birge and Qi for two-stage stochastic program [6] and its parallelization suggested in [22]. Pflug and Halada [30] proposed a generalization of this type of factorization for multistage stochastic programs. The parallel computer program for three-stage stochastic program has been proposed, implemented and tested on examples with relative small number of scenarios in papers [4], [17] and [32]. Recent contributions to the application of interior point method and its parallelization in multistage stochastic programms can be found in [5], [14], [15] and [16]. We have performed financial studies using historical data of interest rates and exchange rates. Two-stage and three-stage stochastic models with different quality of information about future development of financial markets have been compared. The aim of this analysis was to verify whether higher number of stages implies better quality of the decision process. This has been a continuation of [18] where we performed several preliminary calculations with a low number of scenarios and different scenario setting. The results indicated that the increasing number of stages could make sense and that the optimal decision is sensitive with respect to different generations of the scenario tree. Moreover we have augmented the existing three-stage parallel program with the sparse matrix representation needed for solving large optimization problems. However, no financial studies were performed in [18]. In this paper we include the existing parallel three-stage stochastic program into a more complex code, enabling thus testing the portfolio management model on historical data of indices. The scenarios of possible developments were generated by using the Monte Carlo method. The parallel three-stage stochastic algorithm based on the interior point method and using the parallel BQ factorization, allowed us to generate trees with a large number of scenarios. The paper is organized as follows: The problem formulation with financial instruments, constraint equations and an objective function is formulated in Section 2. We describe the multistage stochastic program used for portfolio management in detail in Section 3. Section 4 contains the algorithm of calculation of the financial study. Parallel BQ factorization for the three-stage stochastic program is given in Section 5. Experimental results, parallel and financial performance of the proposed model are demonstrated in Section 6. Section 7 contains conclusions and final remarks.

We have presented a multistage stochastic model for allocation of financial resources to bond indices in different currencies. The model was tested on historical data containing the values of indices of government bonds and exchange rates. We have compared the two-stage and the three-stage stochastic models from the point of view of financial performance. We have showed that it make sense to increase the number of stages if we have “a good information” about the future development of financial markets. Increasing the number of stages need not improve the quality of the results in the case of a low quality of information. Furthermore, in a properly calibrated model a higher number of scenarios could improve the financial performance. For solving two-stage and three-stage stochastic programs the interior point method (IPM) was used. An application of the BQ method to the IPM allowed decomposition of the large linear system to smaller blocks. The three-stage parallel programs were parallelized in two levels. On the higher level several two-stage problems were processed in parallel, while on the lower level several one-stage problems were processed in parallel. By creating a virtual processor array we have showed that the best performance results were achieved, when the highest possible number of processors was employed in the parallel processing of two-stage problems. The parallel code was written in the Fortran programming language using the MPI.