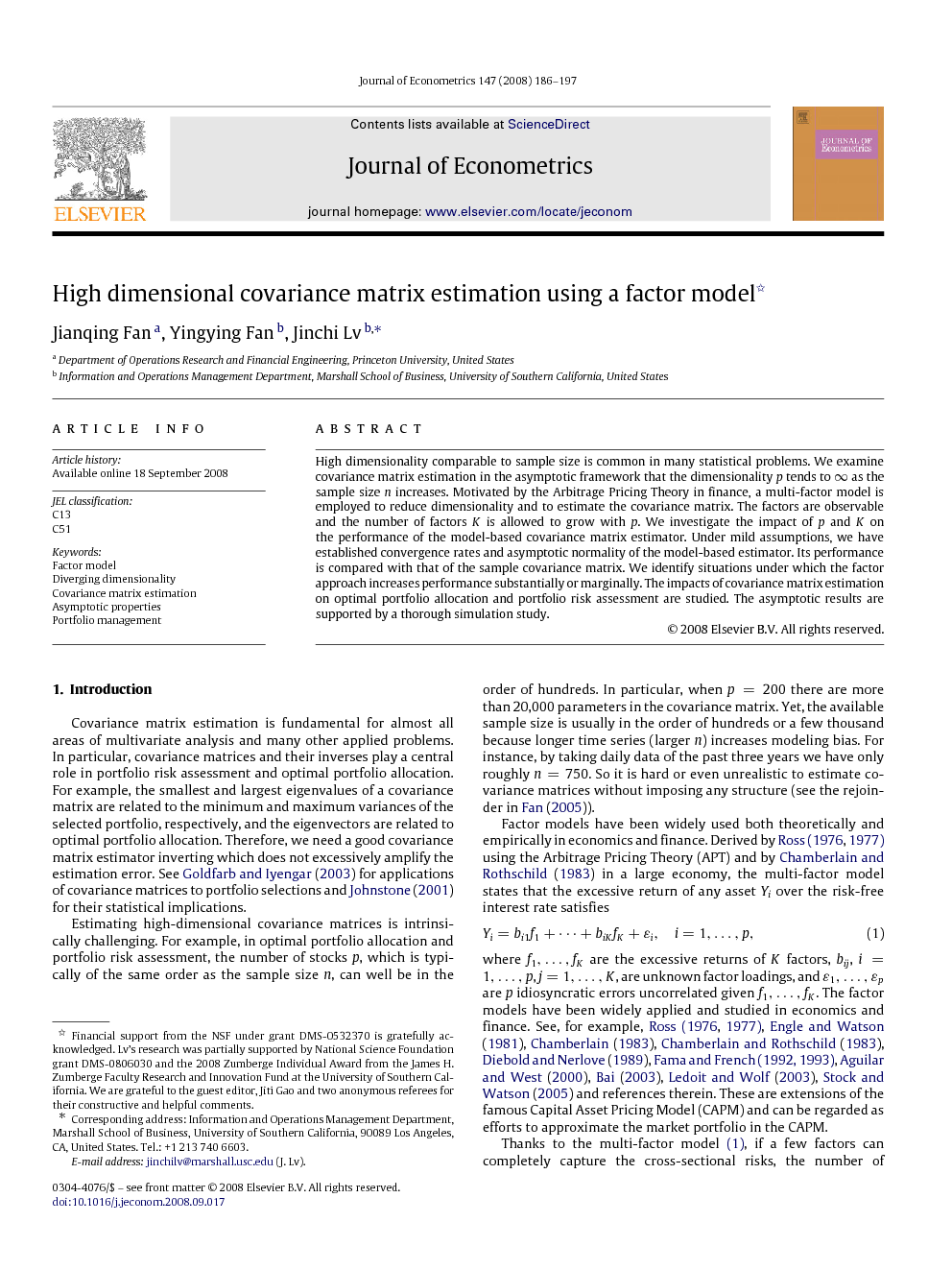 Covariance matrix estimation is fundamental for almost all areas of multivariate analysis and many other applied problems. In particular, covariance matrices and their inverses play a central role in portfolio risk assessment and optimal portfolio allocation. For example, the smallest and largest eigenvalues of a covariance matrix are related to the minimum and maximum variances of the selected portfolio, respectively, and the eigenvectors are related to optimal portfolio allocation. Therefore, we need a good covariance matrix estimator inverting which does not excessively amplify the estimation error. See Goldfarb and Iyengar (2003) for applications of covariance matrices to portfolio selections and Johnstone (2001) for their statistical implications. Estimating high-dimensional covariance matrices is intrinsically challenging. For example, in optimal portfolio allocation and portfolio risk assessment, the number of stocks pp, which is typically of the same order as the sample size nn, can well be in the order of hundreds. In particular, when p=200p=200 there are more than 20,000 parameters in the covariance matrix. Yet, the available sample size is usually in the order of hundreds or a few thousand because longer time series (larger nn) increases modeling bias. For instance, by taking daily data of the past three years we have only roughly n=750n=750. So it is hard or even unrealistic to estimate covariance matrices without imposing any structure (see the rejoinder in Fan (2005)). Factor models have been widely used both theoretically and empirically in economics and finance. Derived by Ross, 1976 and Ross, 1977 using the Arbitrage Pricing Theory (APT) and by Chamberlain and Rothschild (1983) in a large economy, the multi-factor model states that the excessive return of any asset YiYi over the risk-free interest rate satisfies equation(1) View the MathML sourceYi=bi1f1+⋯+biKfK+εi,i=1,…,p, Turn MathJax on where f1,…,fKf1,…,fK are the excessive returns of KK factors, bijbij, i=1,…,pi=1,…,p, j=1,…,Kj=1,…,K, are unknown factor loadings, and ε1,…,εpε1,…,εp are pp idiosyncratic errors uncorrelated given f1,…,fKf1,…,fK. The factor models have been widely applied and studied in economics and finance. See, for example, Ross, 1976 and Ross, 1977, Engle and Watson (1981), Chamberlain (1983), Chamberlain and Rothschild (1983), Diebold and Nerlove (1989), Fama and French, 1992 and Fama and French, 1993, Aguilar and West (2000), Bai (2003), Ledoit and Wolf (2003), Stock and Watson (2005) and references therein. These are extensions of the famous Capital Asset Pricing Model (CAPM) and can be regarded as efforts to approximate the market portfolio in the CAPM. Thanks to the multi-factor model (1), if a few factors can completely capture the cross-sectional risks, the number of parameters in covariance matrix estimation can be significantly reduced. For example, using the Fama-French three-factor model (Fama and French, 1992 and Fama and French, 1993), there are 4p4p instead of p(p+1)/2p(p+1)/2 parameters to be estimated. Despite the popularity of factor models in the literature, the impact of dimensionality on the estimation errors of covariance matrices and its applications to optimal portfolio allocation and portfolio risk assessment are poorly understood so, in this paper, determined efforts are made on such an investigation. To make the multi-factor model more realistic, we allow KK to grow with the number of assets pp and hence with the sample size nn. As a result, we also investigate the impact of the number of factors on the estimation of covariance matrices, as well as its applications to optimal portfolio allocation and portfolio risk assessment. To appreciate the derived rates of convergence, we compare them with those without using the factor structure. One natural candidate is the sample covariance matrix. This also allows us to examine the impact of dimensionality on the performance of the sample covariance matrix. We will assume that the factors are observable as in Fama and French, 1992 and Fama and French, 1993. Our results also provide an important milestone for understanding the performance of factor models with unobservable factors. The traditional covariance matrix estimator, the sample covariance matrix, is known to be unbiased, and it is invertible when the dimensionality is no larger than the sample size. See, for example, Eaton and Tyler (1994) for the asymptotic spectral distributions of random matrices including sample covariance matrices and their statistical implications. In the absence of prior information about the population covariance matrix, the sample covariance matrix is certainly a natural candidate in the case of small dimensionality, but no longer performs very well for moderate or large dimensionality [see, e.g. Lin and Perlman (1985) and Johnstone (2001)]. Many approaches were proposed in the literature to construct good covariance matrix estimators. Among them, two main directions were taken. One is to remedy the sample covariance matrix and construct a better one by using approaches such as shrinkage and the eigen-method, etc. See, for example, Ledoit and Wolf (2004) and Stein (1975). The other one is to reduce dimensionality by imposing some structure on the data. Many structures, such as sparsity, compound symmetry, and the autoregressive model, are widely used. Various approaches were taken to seek a balance between the bias and variance of covariance matrix estimators. See, for example, Wong et al. (2003), Huang et al. (2006), and Bickel and Levina (2008). The rest of the paper is organized as follows. Section 2 introduces the estimators of the covariance matrix. In Section 3 we give some basic assumptions and present sampling properties of the estimators. We study the impacts of covariance matrix estimation on optimal portfolio allocation and portfolio risk assessment in Section 4. A simulation study is presented in Section 5, which augments our theoretical study. Section 6 contains some concluding remarks. The proofs of our results are given in the Appendix.