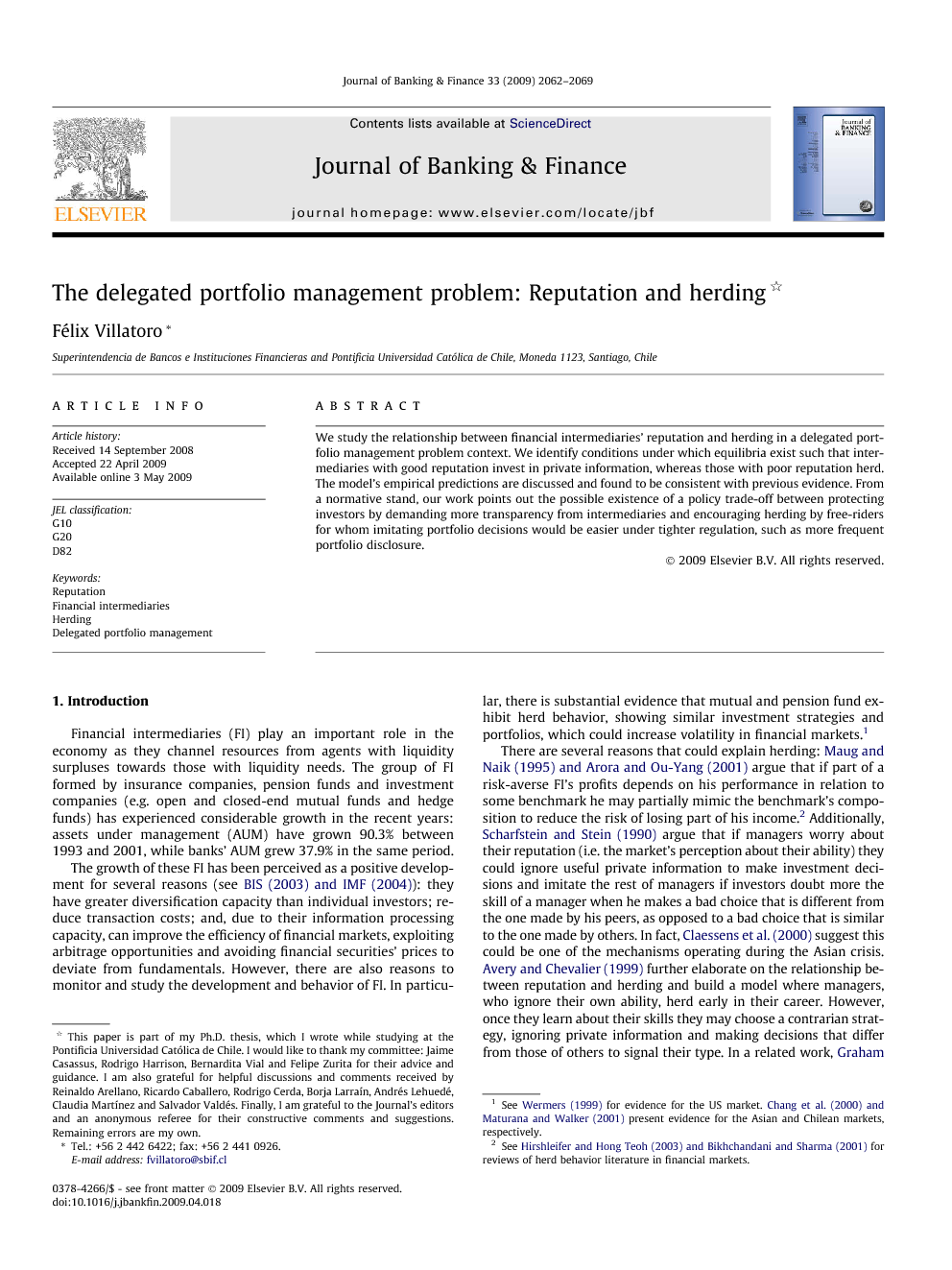 We study the relationship between financial intermediaries’ reputation and herding in a delegated portfolio management problem context. We identify conditions under which equilibria exist such that intermediaries with good reputation invest in private information, whereas those with poor reputation herd. The model’s empirical predictions are discussed and found to be consistent with previous evidence. From a normative stand, our work points out the possible existence of a policy trade-off between protecting investors by demanding more transparency from intermediaries and encouraging herding by free-riders for whom imitating portfolio decisions would be easier under tighter regulation, such as more frequent portfolio disclosure.

Financial intermediaries (FI) play an important role in the economy as they channel resources from agents with liquidity surpluses towards those with liquidity needs. The group of FI formed by insurance companies, pension funds and investment companies (e.g. open and closed-end mutual funds and hedge funds) has experienced considerable growth in the recent years: assets under management (AUM) have grown 90.3% between 1993 and 2001, while banks’ AUM grew 37.9% in the same period. The growth of these FI has been perceived as a positive development for several reasons (see BIS, 2003 and IMF, 2004): they have greater diversification capacity than individual investors; reduce transaction costs; and, due to their information processing capacity, can improve the efficiency of financial markets, exploiting arbitrage opportunities and avoiding financial securities’ prices to deviate from fundamentals. However, there are also reasons to monitor and study the development and behavior of FI. In particular, there is substantial evidence that mutual and pension fund exhibit herd behavior, showing similar investment strategies and portfolios, which could increase volatility in financial markets.1 There are several reasons that could explain herding: Maug and Naik, 1995 and Arora and Ou-Yang, 2001 argue that if part of a risk-averse FI’s profits depends on his performance in relation to some benchmark he may partially mimic the benchmark’s composition to reduce the risk of losing part of his income.2 Additionally, Scharfstein and Stein (1990) argue that if managers worry about their reputation (i.e. the market’s perception about their ability) they could ignore useful private information to make investment decisions and imitate the rest of managers if investors doubt more the skill of a manager when he makes a bad choice that is different from the one made by his peers, as opposed to a bad choice that is similar to the one made by others. In fact, Claessens et al. (2000) suggest this could be one of the mechanisms operating during the Asian crisis. Avery and Chevalier (1999) further elaborate on the relationship between reputation and herding and build a model where managers, who ignore their own ability, herd early in their career. However, once they learn about their skills they may choose a contrarian strategy, ignoring private information and making decisions that differ from those of others to signal their type. In a related work, Graham (1999) predicts that as the initial reputation of agents improves they will herd more as they want to avoid a large drop in profits associated with a fall in reputation, which occurs if an agent’s decision is different from others’. However, unlike Avery and Chevalier (1999), Graham does not study how an agent’s incentives to herd change as his reputation endogenously changes over time. On the other hand, there is a strand of the delegated portfolio management problem (DPMP) literature that highlights FI’s reputation potential role as an incentive aligning device: if the FI’s future profits depend on his reputation (e.g. greater fees, more clients), he could be willing to make a greater level of effort to manage the portfolio to avoid possible future losses in income. The works by Heinkel and Stoughton, 1994 and Farnsworth, 2003 explore this argument, showing how the DPM market could develop even with the use of simple remuneration schemes (e.g. a fixed percentage of AUM).3 However, this literature has some limitations. Heinkel and Stoughton (1994) make strong assumptions about the principal–agent relationship to obtain a tractable model, casting doubt on the general validity of their conclusions.4Farnsworth (2003) assumes that the principal has committed ex-ante to increase the flow of AUM if the agent’s performance is good. Moreover, these works do not study the relationship between reputation and herding. On the other hand, the papers mentioned above overlook the fact that in a multiple-period setup, unless there is a permanent source of uncertainty regarding the FI’s characteristics, in a long-run equilibrium there will not be investing in reputation. This point is made by Hölmstrom, 1999, Mailath and Samuelson, 1998, Mailath and Samuelson, 2001 and Vial, 2008, although not in a DPM context, and we take it into consideration in our work. We find that, under certain conditions, there are equilibria in which FI with high reputation are prone to invest in information, whereas those with poor reputation will tend to imitate other FI’s portfolio decisions. This prediction is consistent with previous empirical work by Chevalier and Ellison, 1999 and Hong et al., 2000. Also, we use numerical examples to determine the magnitude of herd behavior in response to changes in the model’s parameters. We view our work as an alternative rationalization for the empirical evidence found in Chevalier and Ellison, 1999 and Hong et al., 2000. In our setup, the mechanisms operating in equilibrium are different from those in Scharfstein and Stein, 1990, Avery and Chevalier, 1999 and Graham, 1999; in particular due to our modeling decision of using a continuum of FI, the portfolio choice of a FI contains no information regarding the type of another FI. This is the mechanism affecting the behavior of managers in these three works. Our findings are more optimistic in the sense that lack of herding by FI with high reputation is associated with efficient use of private information. This is important because Avery and Chevalier, 1999 and Scharfstein and Stein, 1990 assume a positive relationship between reputation and profits for managers in a two-period setup. However, in the presence of the pathological behavior implied by these models, endogenously deriving a long-term positive relationship between reputation and willingness to pay seems harder to achieve. Moreover, rationalizing the increasing importance of institutional investors documented above is difficult if all FI, regardless of their reputation, make little or no use of private information. The rest of the paper is organized as follows. Section 2 presents the model. Sections 3 and 4 discuss and characterize it. Section 5 discusses the empirical predictions. Section 6 presents some final remarks regarding the generality of our results and concludes.