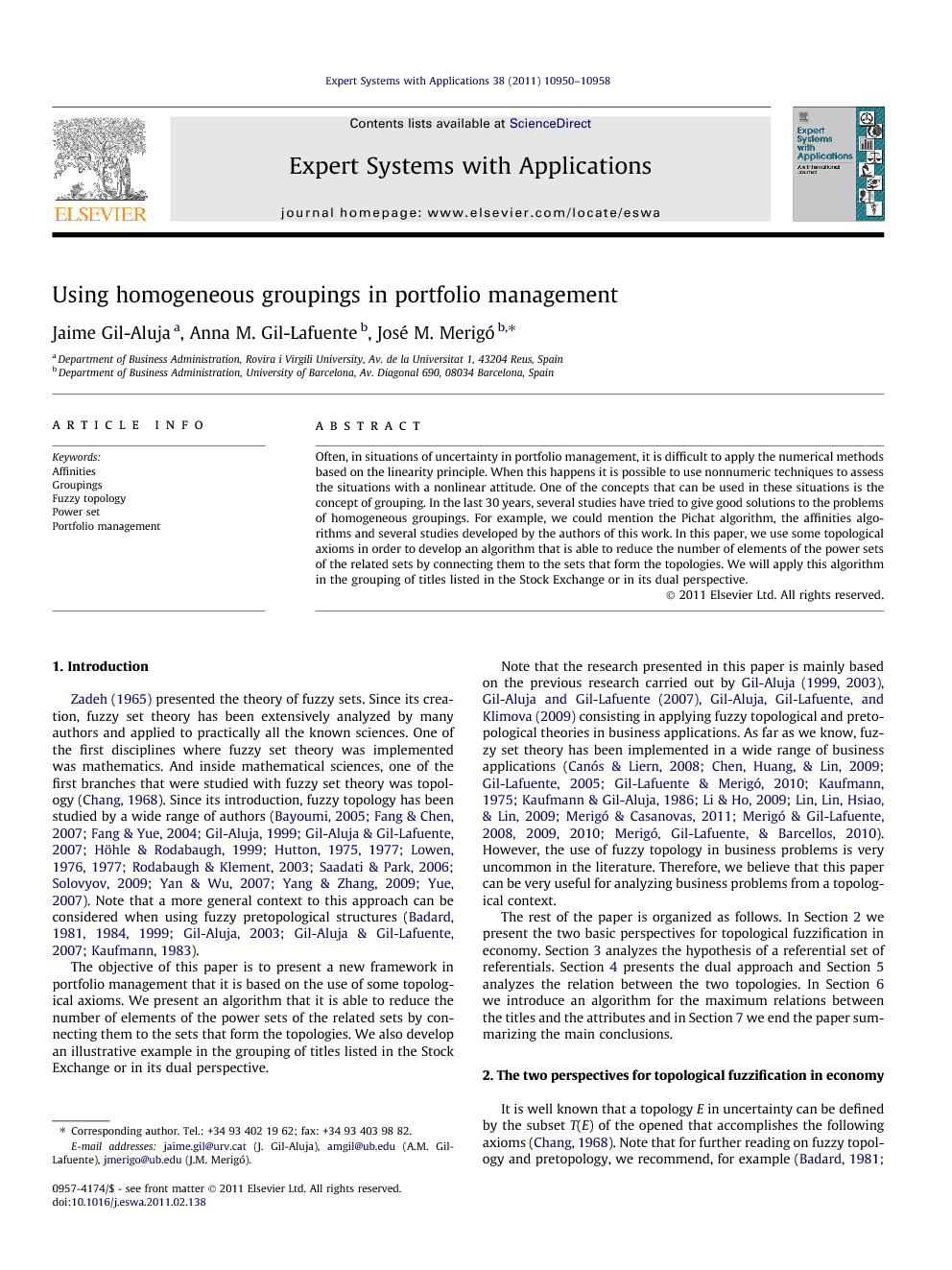 Often, in situations of uncertainty in portfolio management, it is difficult to apply the numerical methods based on the linearity principle. When this happens it is possible to use nonnumeric techniques to assess the situations with a nonlinear attitude. One of the concepts that can be used in these situations is the concept of grouping. In the last 30 years, several studies have tried to give good solutions to the problems of homogeneous groupings. For example, we could mention the Pichat algorithm, the affinities algorithms and several studies developed by the authors of this work. In this paper, we use some topological axioms in order to develop an algorithm that is able to reduce the number of elements of the power sets of the related sets by connecting them to the sets that form the topologies. We will apply this algorithm in the grouping of titles listed in the Stock Exchange or in its dual perspective.

Zadeh (1965) presented the theory of fuzzy sets. Since its creation, fuzzy set theory has been extensively analyzed by many authors and applied to practically all the known sciences. One of the first disciplines where fuzzy set theory was implemented was mathematics. And inside mathematical sciences, one of the first branches that were studied with fuzzy set theory was topology (Chang, 1968). Since its introduction, fuzzy topology has been studied by a wide range of authors (Bayoumi, 2005, Fang and Chen, 2007, Fang and Yue, 2004, Gil-Aluja, 1999, Gil-Aluja and Gil-Lafuente, 2007, Höhle and Rodabaugh, 1999, Hutton, 1975, Hutton, 1977, Lowen, 1976, Lowen, 1977, Rodabaugh and Klement, 2003, Saadati and Park, 2006, Solovyov, 2009, Yan and Wu, 2007, Yang and Zhang, 2009 and Yue, 2007). Note that a more general context to this approach can be considered when using fuzzy pretopological structures (Badard, 1981, Badard, 1984, Badard, 1999, Gil-Aluja, 2003, Gil-Aluja and Gil-Lafuente, 2007 and Kaufmann, 1983). The objective of this paper is to present a new framework in portfolio management that it is based on the use of some topological axioms. We present an algorithm that it is able to reduce the number of elements of the power sets of the related sets by connecting them to the sets that form the topologies. We also develop an illustrative example in the grouping of titles listed in the Stock Exchange or in its dual perspective. Note that the research presented in this paper is mainly based on the previous research carried out by Gil-Aluja, 1999, Gil-Aluja, 2003, Gil-Aluja and Gil-Lafuente, 2007 and Gil-Aluja et al., 2009 consisting in applying fuzzy topological and pretopological theories in business applications. As far as we know, fuzzy set theory has been implemented in a wide range of business applications (Canós and Liern, 2008, Chen et al., 2009, Gil-Lafuente, 2005, Gil-Lafuente and Merigó, 2010, Kaufmann, 1975, Kaufmann and Gil-Aluja, 1986, Li and Ho, 2009, Lin et al., 2009, Merigó and Casanovas, 2011, Merigó and Gil-Lafuente, 2008, Merigó and Gil-Lafuente, 2009, Merigó and Gil-Lafuente, 2010 and Merigó et al., 2010). However, the use of fuzzy topology in business problems is very uncommon in the literature. Therefore, we believe that this paper can be very useful for analyzing business problems from a topological context. The rest of the paper is organized as follows. In Section 2 we present the two basic perspectives for topological fuzzification in economy. Section 3 analyzes the hypothesis of a referential set of referentials. Section 4 presents the dual approach and Section 5 analyzes the relation between the two topologies. In Section 6 we introduce an algorithm for the maximum relations between the titles and the attributes and in Section 7 we end the paper summarizing the main conclusions.

The operators that work in the financial markets usually try to form groups of titles that permit to obtain some qualities such as rentability, stability and risk limitation, in order to be prepared against an unexpected volatility. It is obvious that there exist a wide range of methods for selecting the titles of a portfolio. In this paper, we have considered a scenario where we form in a first stage, subsets of titles, where each one of them is constituted by elements that possess certain homogeneity according to some attributes previously established. Note that the objective is to extract one or several titles of each subset in order to get the desired properties. The theoretical solution of an approach as the one described here, has generalized other previous algorithms that were not so complete as this one such as the Pichat algorithm or the Kaufmann and Gil-Aluja algorithm. We believe that the presented algorithm solves the problems of the Pichat and the Kaufmann and Gil-Aluja algorithms. Note that in some exceptional situations the algorithm presented here can become the Kaufmann and Gil-Aluja algorithm. This happens when the two topologies used in the relation are equal to the power sets of the sets of titles and its attributes. In the beginning of this work we have shown two methods for fuzzifying the topologies. The approach developed in this paper is based on one of these methods. Note that in future research, we will consider the possibility of using the other method in the problem. Finally, we want to mention the usefulness in the operations of our algorithm that has been tested with satisfactory results twice with the examples shown in the paper.