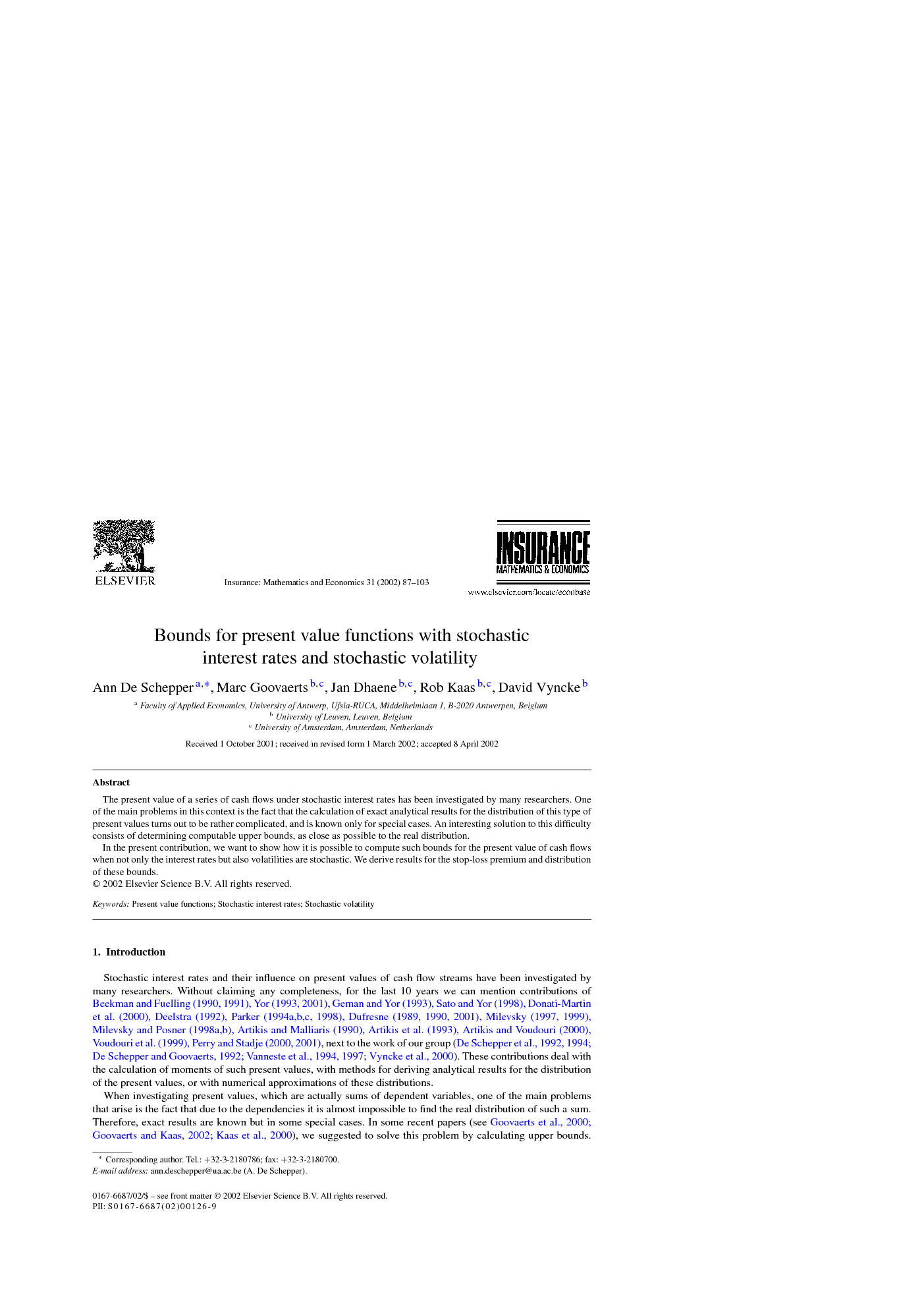 The present value of a series of cash flows under stochastic interest rates has been investigated by many researchers. One of the main problems in this context is the fact that the calculation of exact analytical results for the distribution of this type of present values turns out to be rather complicated, and is known only for special cases. An interesting solution to this difficulty consists of determining computable upper bounds, as close as possible to the real distribution. In the present contribution, we want to show how it is possible to compute such bounds for the present value of cash flows when not only the interest rates but also volatilities are stochastic. We derive results for the stop-loss premium and distribution of these bounds.

Stochastic interest rates and their influence on present values of cash flow streams have been investigated by many researchers. Without claiming any completeness, for the last 10 years we can mention contributions of Beekman and Fuelling, 1990, Beekman and Fuelling, 1991, Yor, 1993, Yor, 2001, Geman and Yor, 1993, Sato and Yor, 1998, Donati-Martin et al., 2000, Deelstra, 1992, Parker, 1994a, Parker, 1994b, Parker, 1994c, Parker, 1998, Dufresne, 1989, Dufresne, 1990, Dufresne, 2001, Milevsky, 1997, Milevsky, 1999, Milevsky and Posner, 1998a, Milevsky and Posner, 1998b, Artikis and Malliaris, 1990, Artikis et al., 1993, Artikis and Voudouri, 2000, Voudouri et al., 1999, Perry and Stadje, 2000 and Perry and Stadje, 2001, next to the work of our group (De Schepper et al., 1992, De Schepper et al., 1994, De Schepper and Goovaerts, 1992, Vanneste et al., 1994, Vanneste et al., 1997 and Vyncke et al., 2000). These contributions deal with the calculation of moments of such present values, with methods for deriving analytical results for the distribution of the present values, or with numerical approximations of these distributions. When investigating present values, which are actually sums of dependent variables, one of the main problems that arise is the fact that due to the dependencies it is almost impossible to find the real distribution of such a sum. Therefore, exact results are known but in some special cases. In some recent papers (see Goovaerts and Kaas, 2002, Goovaerts et al., 2000 and Kaas et al., 2000), we suggested to solve this problem by calculating upper bounds. Using the concept of comonotonicity, we are able to determine bounds in convexity order that are rather close to the original variable, and much easier to compute. For the meaning and consequences of this approach, we refer to Section 2. One of the applications of this kind of problems is the investigation of the present value of a series of non-negative deterministic payments at times 1 up to n where Yt represents the stochastic continuous compounded rate of return over the period [t−1,t] (see also Kaas et al., 2000). In the classical assumption, prices are log-normally distributed, and thus the variables Yt are independent and normally distributed. In other words, where μt and σt are constants. In the present contribution, we will generalise this classical assumption by replacing the constant σt by a random variable View the MathML source, where we assume that the volatilities View the MathML source for the periods [t−1,t] are mutually independent variables. For any realisation σt, we then have that This idea has been borrowed from Taylor (1994). In correspondence with the financial paradigma (see e.g. Gerber and Shiu, 1994), in Eq. (1) we should correct the variables Yt by means of their volatility, or where Y(t)=Y1+Y2+⋯+Yt is used to denote the total compounded rate of return over the period [0,t], and where Σ(t) is defined as View the MathML source. The reason for this change by means of the volatility as suggested in and has to be found in the fact that with this adaptation, for the (new) accumulated values we then have the identity Note that for the variable Y(t) we have the obvious (conditional) moments For the distributions of the variables Y(t) and Σ(t), we will use the notations Ft(x) and Gt(x), or Since we already fixed the model for Y(t), the function Ft(x) is known. For the calculation of Gt(x), we need to specify a model for the stochastic volatilities. In order to study the distribution of the present value (5), we will use recent results concerning bounds for sums of stochastic variables. In the following section, we will explain the methodology we used for finding the desired answers. We will briefly repeat the most important results. Section 3 contains an expression for the function Gt(x) for a few volatility models. The concrete boundary results for the quantity A of Eq. (5) are presented in 4 and 5. Finally in Section 6, we will give some numerical illustrations.