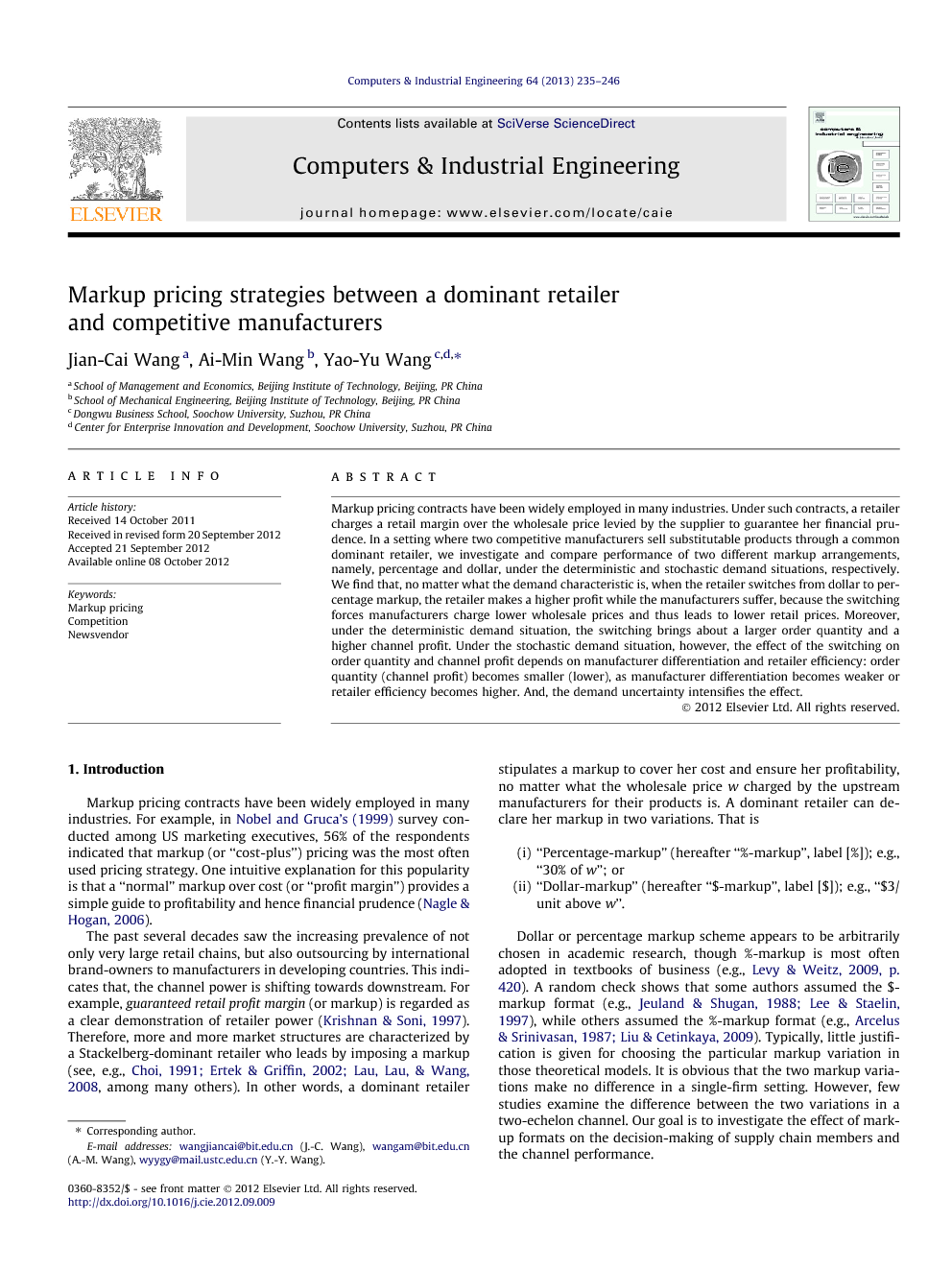 Markup pricing contracts have been widely employed in many industries. Under such contracts, a retailer charges a retail margin over the wholesale price levied by the supplier to guarantee her financial prudence. In a setting where two competitive manufacturers sell substitutable products through a common dominant retailer, we investigate and compare performance of two different markup arrangements, namely, percentage and dollar, under the deterministic and stochastic demand situations, respectively. We find that, no matter what the demand characteristic is, when the retailer switches from dollar to percentage markup, the retailer makes a higher profit while the manufacturers suffer, because the switching forces manufacturers charge lower wholesale prices and thus leads to lower retail prices. Moreover, under the deterministic demand situation, the switching brings about a larger order quantity and a higher channel profit. Under the stochastic demand situation, however, the effect of the switching on order quantity and channel profit depends on manufacturer differentiation and retailer efficiency: order quantity (channel profit) becomes smaller (lower), as manufacturer differentiation becomes weaker or retailer efficiency becomes higher. And, the demand uncertainty intensifies the effect.

Markup pricing contracts have been widely employed in many industries. For example, in Nobel and Gruca’s (1999) survey conducted among US marketing executives, 56% of the respondents indicated that markup (or “cost-plus”) pricing was the most often used pricing strategy. One intuitive explanation for this popularity is that a “normal” markup over cost (or “profit margin”) provides a simple guide to profitability and hence financial prudence (Nagle & Hogan, 2006). The past several decades saw the increasing prevalence of not only very large retail chains, but also outsourcing by international brand-owners to manufacturers in developing countries. This indicates that, the channel power is shifting towards downstream. For example, guaranteed retail profit margin (or markup) is regarded as a clear demonstration of retailer power ( Krishnan & Soni, 1997). Therefore, more and more market structures are characterized by a Stackelberg-dominant retailer who leads by imposing a markup (see, e.g., Choi, 1991, Ertek and Griffin, 2002 and Lau et al., 2008, among many others). In other words, a dominant retailer stipulates a markup to cover her cost and ensure her profitability, no matter what the wholesale price w charged by the upstream manufacturers for their products is. A dominant retailer can declare her markup in two variations. That is (i) “Percentage-markup” (hereafter “%-markup”, label [%]); e.g., “30% of w”; or (ii) “Dollar-markup” (hereafter “$-markup”, label [$]); e.g., “$3/unit above w”. Dollar or percentage markup scheme appears to be arbitrarily chosen in academic research, though %-markup is most often adopted in textbooks of business (e.g., Levy & Weitz, 2009, p. 420). A random check shows that some authors assumed the $-markup format (e.g., Jeuland and Shugan, 1988 and Lee and Staelin, 1997), while others assumed the %-markup format (e.g., Arcelus and Srinivasan, 1987 and Liu and Cetinkaya, 2009). Typically, little justification is given for choosing the particular markup variation in those theoretical models. It is obvious that the two markup variations make no difference in a single-firm setting. However, few studies examine the difference between the two variations in a two-echelon channel. Our goal is to investigate the effect of markup formats on the decision-making of supply chain members and the channel performance. To this end, this study considers a simple supply chain where a single retailer (she) offers a markup purchasing contract to two competitive manufacturers; the latter two respond by quoting unit wholesale prices. Finally, the order (production) quantity is decided on. Our model includes two demand types: deterministic and stochastic. With stochastic demand, we assume that the manufacturers make order quantity decisions and bear all risk associated with mismatch between supply and demand, considering the popularity of consignment practices (see, Wang, Jiang, & Shen, 2004). Our research quantifies the benefits to all members of the supply chain under different markup pricing settings and helps to identify which contract is most beneficial to the entire channel as well as the different parties involved. We will show that, when the retailer switches from $- to %-markup, the retailer’s profit increases while the manufacturers’ profits decrease, because %-markup imposes more pressure on manufacturers to reduce their wholesale prices and leads to lower retail prices. This is true regardless of whether the demand is deterministic or stochastic. Our study further finds that %-markup can bring a larger order quantity and a higher channel profit under the deterministic demand situation. Under the stochastic demand situation, however, whether this findings hold depends on manufacturer differentiation and retailer efficiency. Both strengthening manufacturer differentiation and reducing retailer’s cost can make a smaller order quantity and a lower channel profit. And, the demand uncertainty can intensify the effect. The rest of this paper is organized as follows. Section 2 provides a brief review of related literature. Section 3 formulates the model, presents equilibrium results for two markup pricing schemes, and compares their performance under the deterministic and stochastic demand situations, respectively. Section 4 concludes and suggests future research directions. The Appendix contains the detailed mathematical proofs for Proposition 1 to Proposition 5.

In this paper, we investigated the performance of two very common retail pricing schemes – %-markup and $-markup – in a supply chain with two competitive manufacturers selling their substitutable products through a common retailer. Two types of demand are analyzed, i.e., deterministic and stochastic. Our analytical and numerical results show that, by switching from $-markup to %-markup contracts, the retailer’s (expected) profit increases, but the manufacturer’s (expected) profit decreases, because %-markup contracts force the manufacturers to reduce their wholesale prices and lower retail prices ensue. The above-stated effects hold regardless of whether demand is deterministic or stochastic. What’s more, under the deterministic demand situation, %-markup contracts can bring a larger order quantity and a higher channel profit (bigger pie). However, under the stochastic demand situation, whether the statement is still valid depends on manufacturer differentiation and retailer efficiency. A smaller order quantity and a lower channel profit can arise as manufacturer differentiation becomes weaker or as the retailer becomes more efficient. And, demand uncertainty σε can intensify the effect. In our study, we employ an iso-elastic demand curve and a multiplicatively stochastic format. As Lau and Lau (2003) pointed out that, it might be worthwhile to investigate in detail the effects of assuming a wider spectrum of demand-curve formats. The same can be said about the effects of different ways of modeling stochasticity (i.e., “additive”, “multiplicative”, or others).