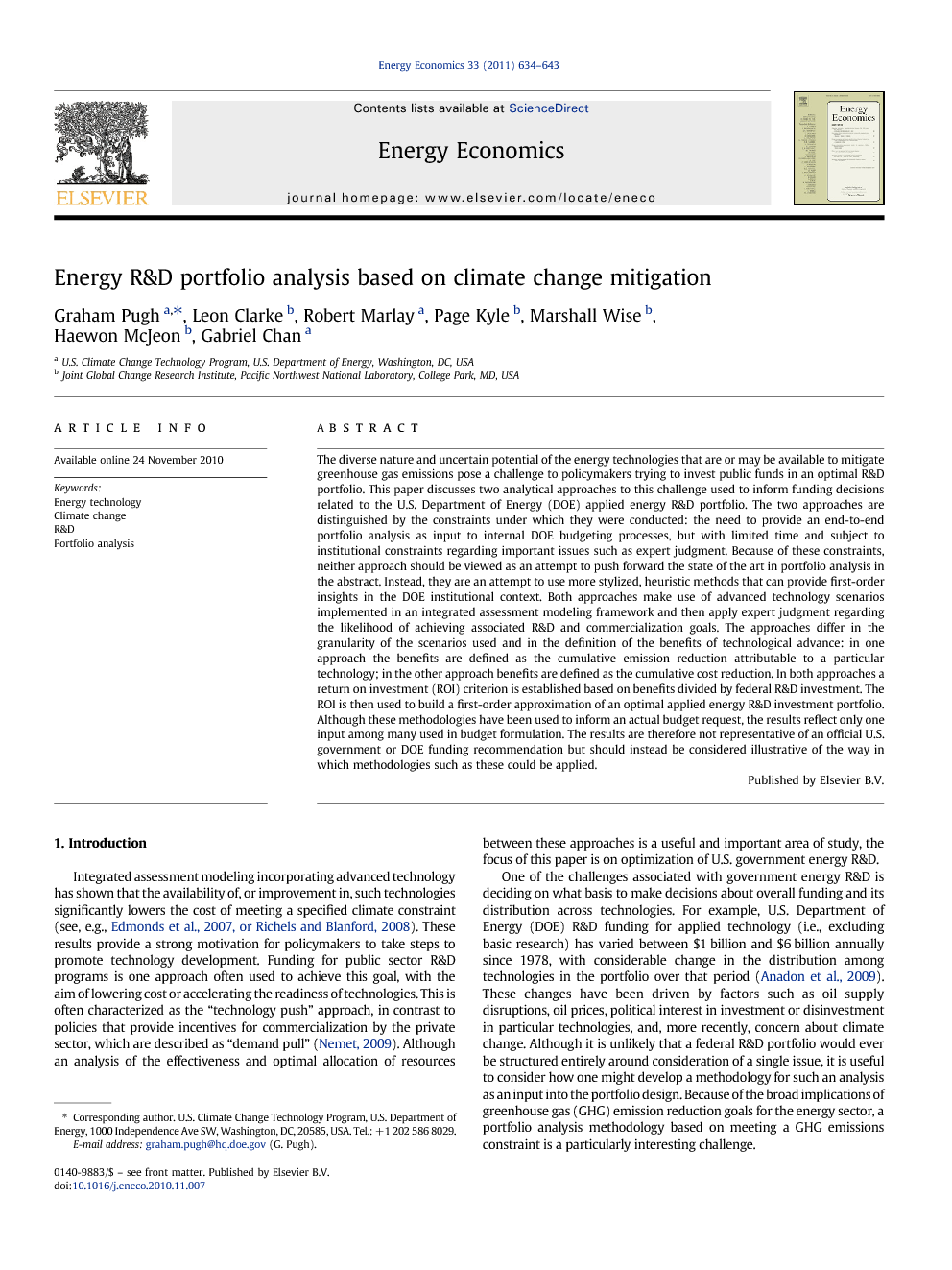 The diverse nature and uncertain potential of the energy technologies that are or may be available to mitigate greenhouse gas emissions pose a challenge to policymakers trying to invest public funds in an optimal R&D portfolio. This paper discusses two analytical approaches to this challenge used to inform funding decisions related to the U.S. Department of Energy (DOE) applied energy R&D portfolio. The two approaches are distinguished by the constraints under which they were conducted: the need to provide an end-to-end portfolio analysis as input to internal DOE budgeting processes, but with limited time and subject to institutional constraints regarding important issues such as expert judgment. Because of these constraints, neither approach should be viewed as an attempt to push forward the state of the art in portfolio analysis in the abstract. Instead, they are an attempt to use more stylized, heuristic methods that can provide first-order insights in the DOE institutional context. Both approaches make use of advanced technology scenarios implemented in an integrated assessment modeling framework and then apply expert judgment regarding the likelihood of achieving associated R&D and commercialization goals. The approaches differ in the granularity of the scenarios used and in the definition of the benefits of technological advance: in one approach the benefits are defined as the cumulative emission reduction attributable to a particular technology; in the other approach benefits are defined as the cumulative cost reduction. In both approaches a return on investment (ROI) criterion is established based on benefits divided by federal R&D investment. The ROI is then used to build a first-order approximation of an optimal applied energy R&D investment portfolio. Although these methodologies have been used to inform an actual budget request, the results reflect only one input among many used in budget formulation. The results are therefore not representative of an official U.S. government or DOE funding recommendation but should instead be considered illustrative of the way in which methodologies such as these could be applied.

This paper has presented two methodologies for climate change portfolio analysis. The two approaches are meant to provide meaningful information for real-world government budgeting processes, subject to the real-world constraints of these processes: limited budgets, often limited time for analysis, and institutional constraints regarding important issues such as expert uncertainty assessment. These constraints push decision makers toward the use of more stylized, heuristic methods that can still provide meaningful, first-order insights. The two approaches use advanced technology scenarios in an integrated assessment modeling framework as inputs to the analysis of a technology R&D portfolio. The first approach was implemented to help inform an actual annual budget formulation process for the applied R&D portfolio in the U.S. Department of Energy. Some of the lessons learned from that effort were incorporated into improvements both to the scenarios and to the portfolio analysis methodology, resulting in the second approach. Improvements in the second approach included the use of one-off scenarios to isolate and bound the range of contributions of individual advanced technologies in a portfolio subject to a given climate constraint, and the use of stochastic methods rather than the more heuristic method of scaling individual technology benefits used in the first approach. Regardless of the approach, however, subjective assessment of the likelihood of success of achieving advanced technology goals plays a critical role in determining the portfolio. This is made more challenging by the sensitivities of the federal budget process, in which internal deliberations on budget levels and R&D elements are confidential. The lack of overlap between technology R&D and commercialization expertise inside and outside the federal government also presents a challenge. The use of expert elicitation and facilitated meetings between R&D and commercialization experts would undoubtedly improve the assessment process. Improvements could be made to the analysis in a number of areas. For example, given variations in technology representations and other assumptions across models, it would be helpful to be able to use multiple models to evaluate technology scenarios. This would allow for identification of common trends and would highlight differences that may point to the need for improved technology characterization. Even within the context of using a single model such as GCAM, sensitivity analyses based on differences in technology assumptions may be helpful to illuminate path dependencies that might otherwise be missed. These approaches could also be expanded beyond the United States, given that U.S. investment is only one part of the global energy technology R&D effort, and significant technology learning and deployment are happening elsewhere. Incorporating results from the ongoing effort to better evaluate the interactions between other sources of advance (e.g., spillovers and learning by doing) and government R&D is also critically important. Despite the challenges associated with analyzing energy technology R&D portfolios, the need for this work is increasing. As governments around the world becoming more focused on addressing the challenge of large-scale emission reductions, wise use of scarce public resources is essential. Too often the allocation of those resources is driven by historical precedent or subjective evaluation. Although it will never be possible or even desirable to completely remove the subjective element, improved methodologies that draw on best available methods, provide meaningful insights, but are still practicable within the constraints of government processes will be very valuable indeed.