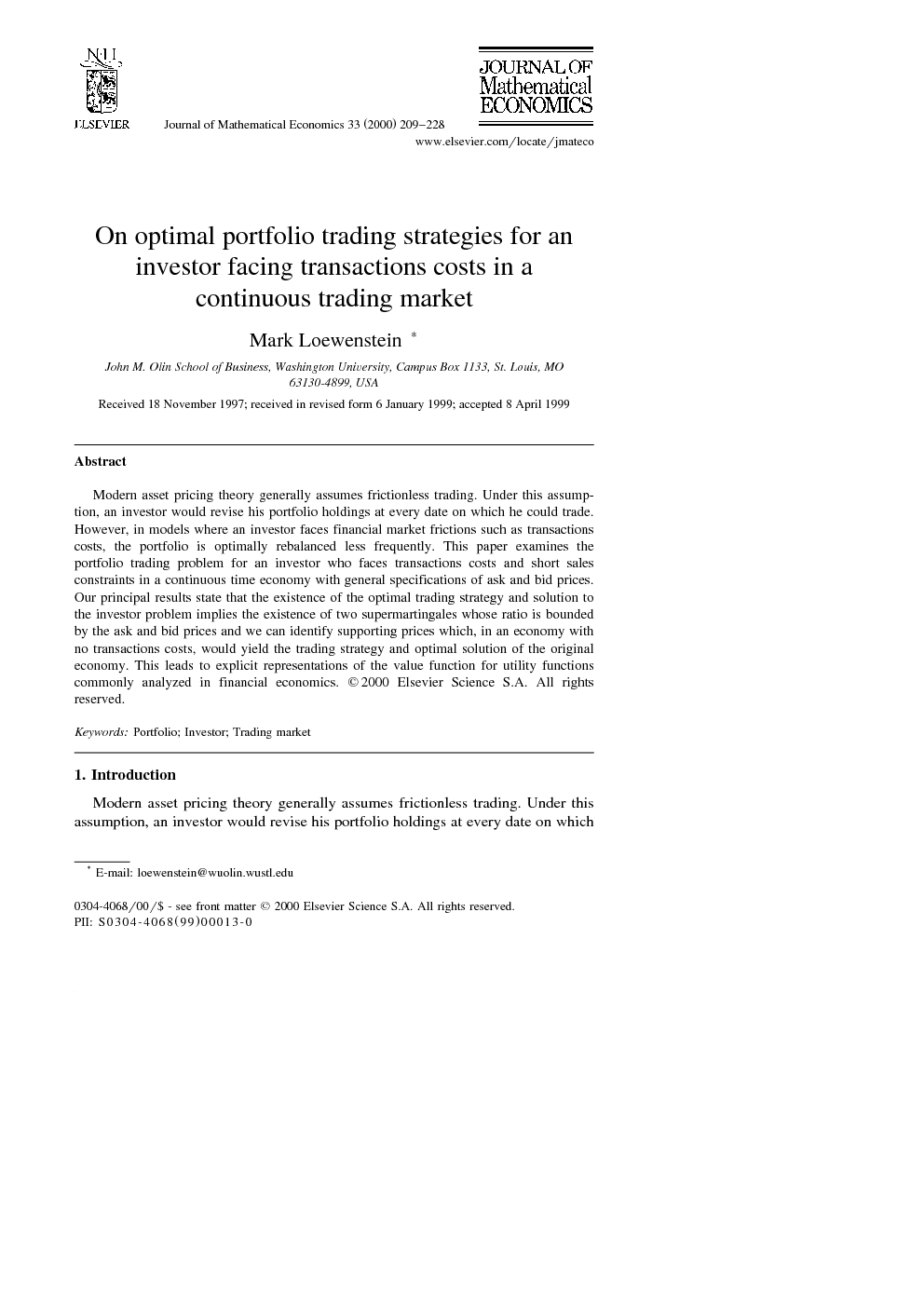 Modern asset pricing theory generally assumes frictionless trading. Under this assumption, an investor would revise his portfolio holdings at every date on which he could trade. However, in models where an investor faces financial market frictions such as transactions costs, the portfolio is optimally rebalanced less frequently. This paper examines the portfolio trading problem for an investor who faces transactions costs and short sales constraints in a continuous time economy with general specifications of ask and bid prices. Our principal results state that the existence of the optimal trading strategy and solution to the investor problem implies the existence of two supermartingales whose ratio is bounded by the ask and bid prices and we can identify supporting prices which, in an economy with no transactions costs, would yield the trading strategy and optimal solution of the original economy. This leads to explicit representations of the value function for utility functions commonly analyzed in financial economics.

Modern asset pricing theory generally assumes frictionless trading. Under this assumption, an investor would revise his portfolio holdings at every date on which he could trade. However, in the real world, people revise their asset holdings much less frequently. Some insight into resolving this puzzle is gained by Constantinides (1979), who shows that an investor facing transactions costs revises his portfolio less frequently. Specifically, the state space can be divided into three regions determined by current portfolio holdings: buy, sell and do not transact. For this reason, there has been a great deal of interest in models with transactions costs. This model is extended by Constantinides (1986), Davis and Norman (1990), and Dumas and Luciano (1991) to the continuous time case for power utility functions and proportional transactions costs. In all of these approaches, prices are taken as lognormally distributed. However, as Dumas and Luciano (1991) carefully note, we do not know whether these prices could ever arise as equilibrium prices. This suggests the need to investigate the issue and to do so requires a more general model of the consumption–investment problem. There are two approaches to solving consumption–investment problems in frictionless economies. The first, pioneered by Merton (1971) for continuous trading, involves using Hamilton–Bellman techniques. The second approach stems from the observation by Harrison and Kreps (1979) that arbitrage free price systems admit an equivalent probability measure under which discounted asset prices become martingales. This observation is exploited initially in Pliska (1986), Karatzas et al. (1987) and Cox and Huang (1989) to solve the consumption investment problem in the complete market case, and in He and Pearson (1991) and Karatzas et al. (1991) to solve the consumption investment problem for the incomplete market case. Recently, Jouini and Kallal (1995) and Jouini (1997) extend the analysis of Harrison and Kreps (1979) to the case where investors incur transactions costs and must obey short sales constraints when they trade assets. They show that absence of arbitrage opportunities in these types of markets implies the existence of supermartingales with certain properties. However, in their analysis, they restrict the trading strategies to simple ones, that is, strategies which only change at a finite number of predetermined times, in order to rule out doubling strategies. Moreover, their analysis effectively assumes terminal wealth to be in L2 and preferences to be norm continuous, which rules out many commonly used utility functions. It would be interesting to evaluate the robustness of these results if agents are permitted to trade continuously using a class of preferences which may not satisfy the assumptions in Harrison and Kreps (1979). This paper uses `martingale' methods to characterize the portfolio trading problem when an investor faces transactions costs in a continuous trading financial market. Our model consists of an investor who wishes to trade assets in such a way as to maximize the expected utility of terminal wealth. We model transactions costs by assuming the investor buys one of the assets at an ask price and sells this asset at a bid price. The ask and bid prices can be specified in a very general way. Our analysis is similar to that of Duffie and Skiadas (1994). Indeed, our most important results are obtained through perturbing optimal trading strategies. In essence, our procedure consists of identifying a set of supporting prices which in an economy without transactions costs would yield the trading strategies and optimal solution of our original economy with transactions costs. One complication which could arise is that the nature of solvency constraints can be confounding due to the fact that in transaction cost economies, the bid and ask prices may not be strongly linked to `economic fundamentals'. For this reason, we side step this issue and choose to analyze the case where short sales are not allowed as in Davis and Norman (1990) and Dumas and Luciano (1991). Other than this restriction, however, our model is quite general, since it allows for non-markovian bid and ask prices, and for a fairly general specification of the economy. We first demonstrate that feasible trading strategies in the transaction cost problem must satisfy a large number of `linear' budget constraints from a family of static economies each of which contains the feasible set for the transaction cost problem. Thus, the optimal solution for the transaction cost problem is dominated by that from each individual budget constraint. We then use concepts from probability theory and convex analysis to characterize the optimal portfolio trading problem with transactions costs. Our approach in essence is to perturb the optimal trading strategies and then to exploit properties of concave functions to relate the optimal solution to the transaction cost problem to particular supermartingales. Our principal results state that the existence of the optimal trading strategies and solution to the transaction cost problem implies, under fairly general conditions, the existence of supermartingales which bear a relationship to the supermartingales derived in Jouini (1997). As a corollary, we obtain that the value function is differentiable for all interior endowments of the two assets which admit an optimal trading strategy. If there exists an agent who has an optimal trading strategy which holds strictly positive amounts of each asset then the supermartingales must be local martingales similar to the martingales in Jouini and Kallal (1995). In any case, we can construct an economy without transactions costs which supports the optimal trading strategies and solution to the transaction cost problem. This leads to a characterization of the optimal solution as the least favorable of a specific set of economies with no transactions costs. Many of our results take for granted the existence of the optimal solution to the transaction cost problem. This issue has been analyzed in a particular case by Cvitanic and Karatzas (1996) who, in related work, demonstrate an existence proof. It seems that this result could be modified to encompass many of the situations we examine.

In this paper, we develop an approach to analyze the investment problem when an agent buys and sells a risky asset at different prices. Our approach in Section 7 . is related to the notion of viability defined by Harrison and Kreps 1979 although we use a different class of preferences than they do. One benefit of this approach is that we can characterize the optimal solution to the transaction cost problem as the minimal among a class of static maximization problems. This leads to functional forms of the value functions which are bounded by known quantities. We also demonstrate that it is not obvious that viability is necessarily associated with martingales even in the case where the short sales constraints do not bind for some agent who has an optimal portfolio trading strategy. In our setting, it seems the strongest statement that can be made is that viability without binding short sales constraints implies the existence of local martingales whose ratio is bounded by the bid and ask prices. Several extensions are possible. First, intermediate consumption could easily be incorporated. Second, we could allow more than one risky asset. Finally, the results and techniques derived in this paper may be useful for analyzing optimal portfolio decisions when an agent must pay transactions costs and, rather than facing short sales constraints, he must maintain a solvency constraint.