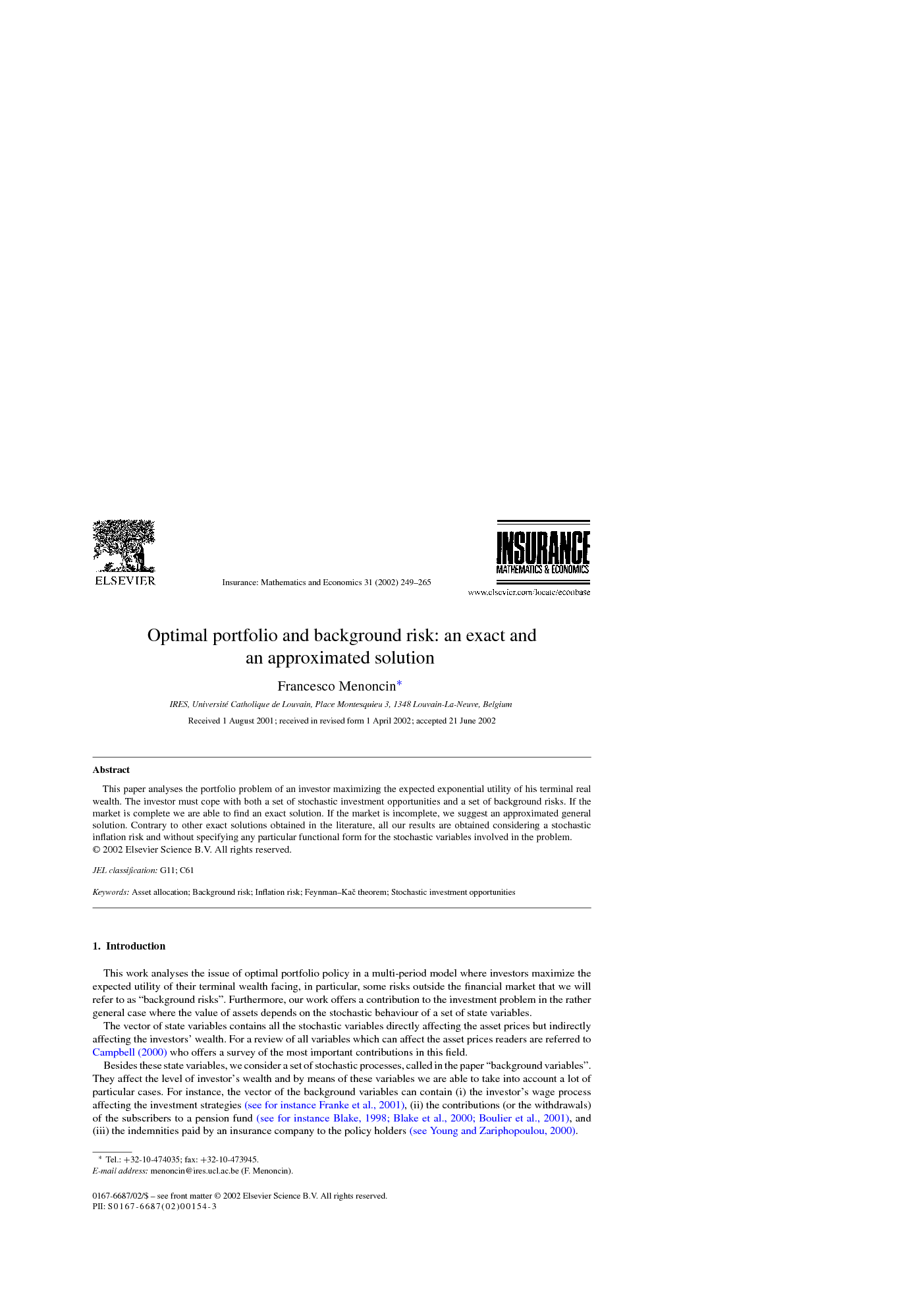 This paper analyses the portfolio problem of an investor maximizing the expected exponential utility of his terminal real wealth. The investor must cope with both a set of stochastic investment opportunities and a set of background risks. If the market is complete we are able to find an exact solution. If the market is incomplete, we suggest an approximated general solution. Contrary to other exact solutions obtained in the literature, all our results are obtained considering a stochastic inflation risk and without specifying any particular functional form for the stochastic variables involved in the problem.

In this paper, we have analysed the asset allocation problem for an investor maximizing the expected value of his terminal exponential utility function. The investor faces an economic environment with stochastic investment opportunities and both a complete and an incomplete financial market are considered. Furthermore, he must cope with a set of background risks affecting the level of his wealth and the inflation risk is also considered. Thus, we suppose that the investor’s problem is to maximaze the expected value of the utility coming from his terminal real wealth. The optimal portfolio is formed by three components: (i) a preference-free part depending only on the diffusion terms of assets and background variables, (ii) a part proportional to both the portfolio Sharpe ratio and the inverse of Arrow–Pratt risk aversion index, and (iii) a part depending on all the state variable parameters. We show that the preference-free component minimizes the instantaneous variance of investor’s wealth differen- tial. For understanding the role of the third component it is necessary to explicitly compute the value function solving the dynamic stochastic optimization problem. With respect to the most common approach used in the literature, the insertion of the inflation risk allows us to find an exact solution for the optimal portfolio problem when the financial market is complete. Furthermore, when the market is incomplete, we suggest a method for finding an approximated solution. We also show that this method systematically overestimates the weight of the third optimal portfolio component. We underline that all our results, contrary to the exact solutions found in the literature, are obtained without specifying any particular functional form for the stochastic variables involved in the problem. Thus, the solutions we are able to find are very general and can be applied to several economic environments.