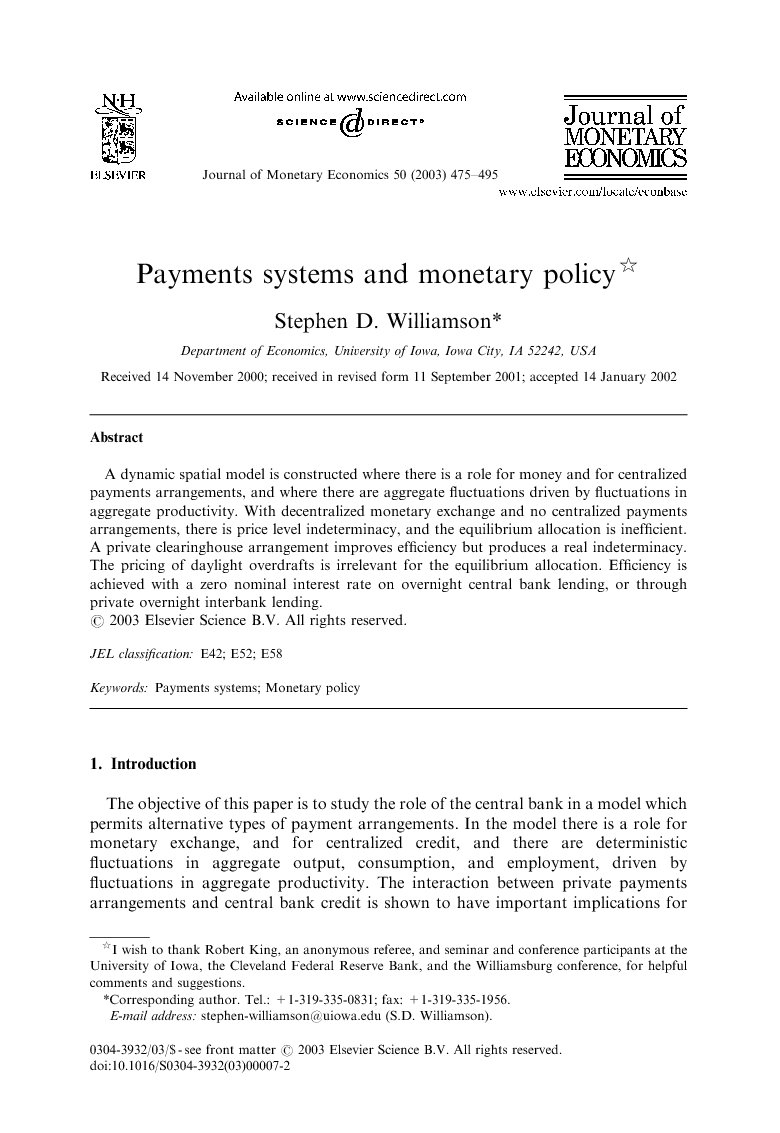 A dynamic spatial model is constructed where there is a role for money and for centralized payments arrangements, and where there are aggregate fluctuations driven by fluctuations in aggregate productivity. With decentralized monetary exchange and no centralized payments arrangements, there is price level indeterminacy, and the equilibrium allocation is inefficient. A private clearinghouse arrangement improves efficiency but produces a real indeterminacy. The pricing of daylight overdrafts is irrelevant for the equilibrium allocation. Efficiency is achieved with a zero nominal interest rate on overnight central bank lending, or through private overnight interbank lending.

In this paper, I constructed a model with spatial separation in which there is a role for money and centralized payments arrangements, with aggregate fluctuations driven by fluctuations in aggregate productivity. When transactions are conducted only using fiat currency in the absence of a payments system, there is an indeterminacy in the price level and in relative prices. However, there exists an equilibrium where the price level and the money stock are constant, and where productivity fluctuations are accommodated. However, this equilibrium allocation is not Pareto optimal. With a clearinghouse arrangement operated by a central bank which permits payments activity with net settlement at the end of each period, there is an improvement in efficiency, but a real indeterminacy can result. An example shows that productivity shocks may not be accommodated, and that the variability in relative prices (which reflects an inefficiency) increases with the variability in productivity. The pricing of intraday overdrafts proves to be irrelevant for the equilibrium allocation. A Pareto optimal allocation is achieved with overnight lending by the central bank at a zero nominal interest rate, and this equilibrium allocation can also be supported with unregulated interbank lending and without outside money. This paper does not address any of the issues associated with risk-bearing and incentives which seem important for some aspects of payments system design. Given what is known about the nature of private insurance and credit contracts under private information, there are good reasons to believe that some restrictions on credit arrangements in payments systems would be appropriate. Temzelides and Williamson (2001) and Williamson (1998) consider dynamic environments with private information which show how credit constraints and imperfect insurance can arise endogenously in payments arrangements. Whether or not there are “systemic risk” issues that need to be addressed in payments system design is a question which needs to be answered by future research.