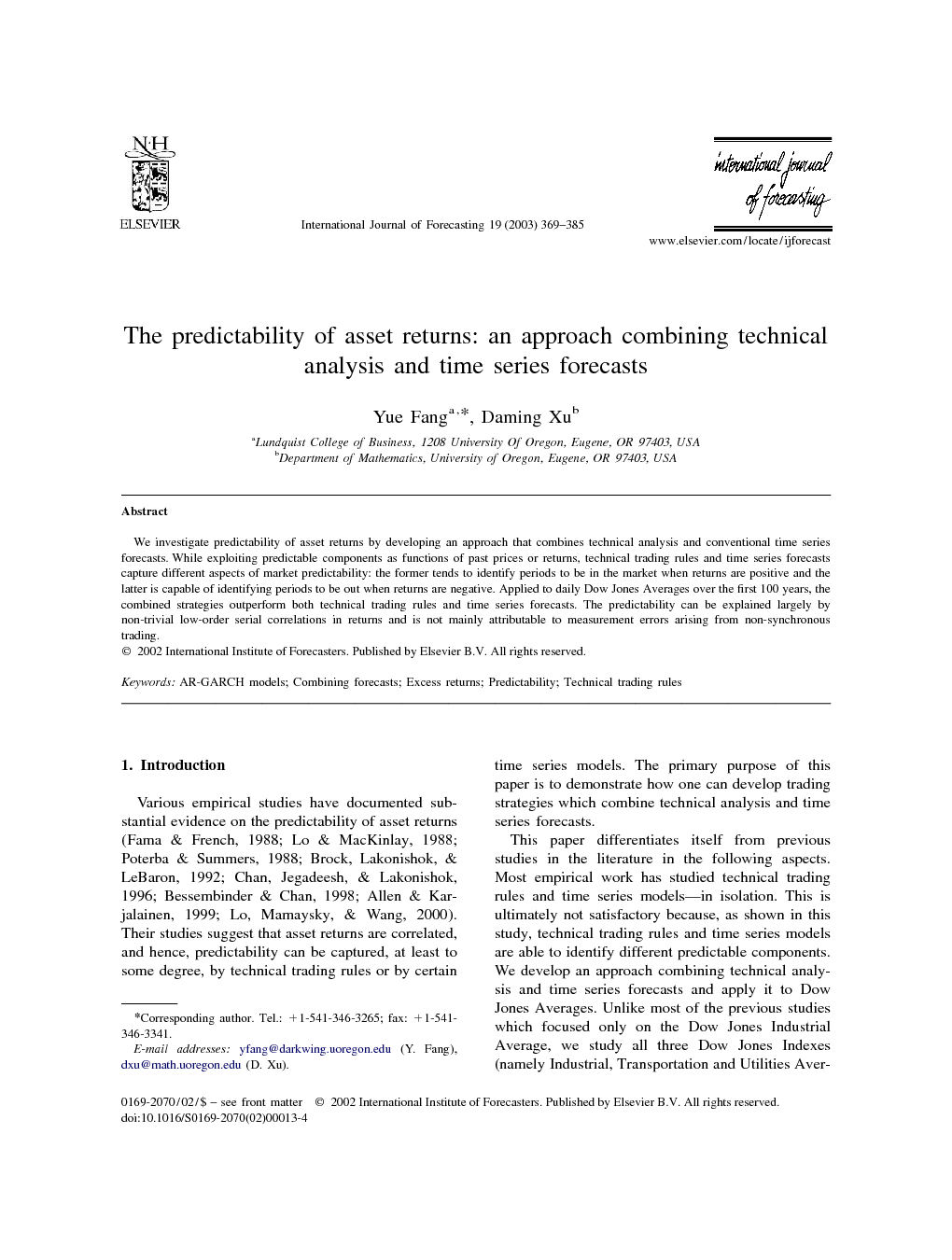 We investigate predictability of asset returns by developing an approach that combines technical analysis and conventional time series forecasts. While exploiting predictable components as functions of past prices or returns, technical trading rules and time series forecasts capture different aspects of market predictability: the former tends to identify periods to be in the market when returns are positive and the latter is capable of identifying periods to be out when returns are negative. Applied to daily Dow Jones Averages over the first 100 years, the combined strategies outperform both technical trading rules and time series forecasts. The predictability can be explained largely by non-trivial low-order serial correlations in returns and is not mainly attributable to measurement errors arising from non-synchronous trading.

In this study, two different but closely related measurements for the performance of various trading strategies are evaluated. The first measurement, ‘Buy−Sell’, assesses the excess gain in returns over the buy-and-hold (pre-trading cost). Utilizing the first 100-year Dow Jones Averages, we find that both technical trading rules and time series models have forecasting ability but each of them captures only part of the aspects of market predictability. Our empirical results indicate that when the market rises the technical rules perform typically better than strategies derived from the conventional time series models. However, the time series forecasts are in general superior to the technical rules when the market falls. Motivated by this finding, we develop a simple approach which combines technical rules and time series forecasts. Our empirical results reveal that, compared with the technical trading rules, the average ‘Buy−Sell’ of combined trading strategies (with the non-synchronous trading adjustment) are increased by about 92%, 142% and 141% for the Industrial, Transportation and Utilities Averages, respectively. The second measurement, ‘break-even cost’, values the average cost that absorbs the excess returns derived from the trading strategy over the buy-and-hold. It depends not only upon the excess return measurement, but also on the number of transactions required. Because of its design, the number of trades of the combined trading strategy is considerably less than that required by the corresponding technical trading rule. If the monthly interest rate of 0.30% is assumed over the full sample period, the average break-even costs from the 10 combined trading strategies (with the non-synchronous trading adjustment) are about 1.009%, 1.964%, and 1.764% for the Industrial, Transportation and Utilities Averages, respectively, in comparison to about 0.595%, 0.838% and 0.797% from the 10 corresponding technical trading rules considered. While larger than some estimates of actual trading costs on the NYSE (about 0.25% plus market impact (Chan & Lakonishok, 1993) or about 25 cents per share including both brokerage costs and an allowance for the bid-ask spread (Fluck, Malkiel, & Quandt, 1997)), the break-even costs from the technical trading rules are within the range of other estimates, for example, 1.35% by Stoll and Whaley (1983).8 Because of the growing evidence on the predictability on asset returns documented in the recent literature, an approach to utilize the information on the predictability looks promising and may have some practical value. The combination of commonly used technical trading rules and some popular time series forecasts, such as the combined trading strategies discussed in this study, is one attempt in this direction. Although there are various seemly plausible models to capture the predictability in asset returns, the question of which time series models should be used and how to formulate a trading strategy (combined with some existing trading techniques such as technical trading rules) must be resolved with the particular application and data at hand. It is apparent that our simple combined trading strategy can be improved depending on different time horizons of investment and the level of transaction costs. Other market data such as trading volume may also improve the excess returns. Since our objective in this paper is to provide further empirical evidence on predictability of asset returns, we keep our discussion on some simple and intuitive approaches to reduce the risk of data snooping problems (Bossaerts & Hillion, 1999). While not necessarily implying inefficiency in the US stock market, our results do, however, have practical implications on the formulation of economic models of asset prices and investment strategies. The evidence of the existence of market predictability suggest that some forms of asset returns, such as that used in the standard Black–Scholes American option formula, are unlikely to be plausible models. Whether the predictability of returns and opportunities for excess returns represent evidence of time-varying risk premiums, the irrational ‘animal spirits’ of agents, market inefficiency or other complex implications remains an open question. The form of the market predictability is poorly understood and finding the source of excess returns is a difficult task. We are currently investigating the nature of the switching point of the combined trading strategies. The results should be of interest to further explore the interaction between technical analysis and time series forecasts and to provide some sort of synthesis about the underlying behavior of stock price changes.