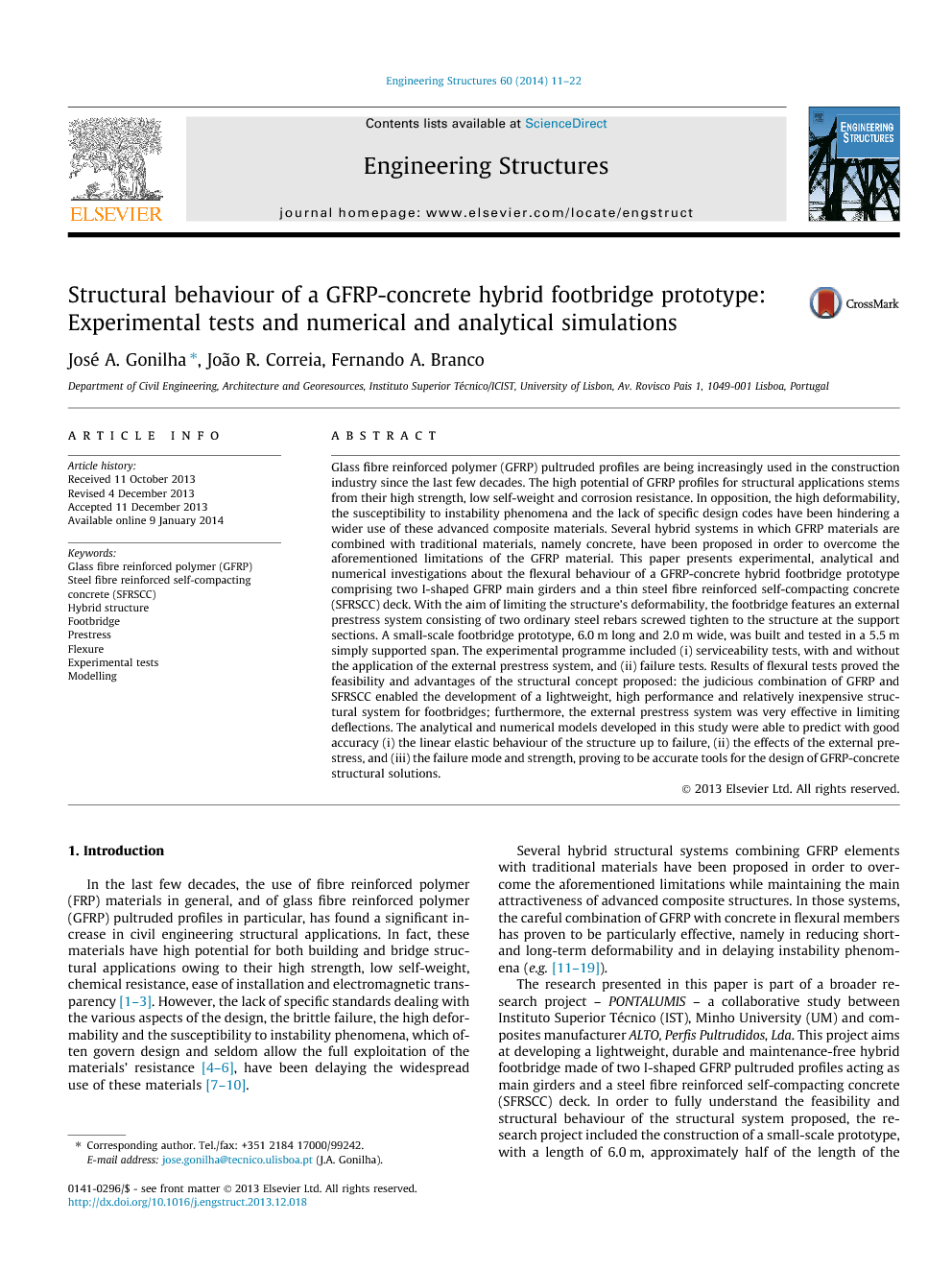 Glass fibre reinforced polymer (GFRP) pultruded profiles are being increasingly used in the construction industry since the last few decades. The high potential of GFRP profiles for structural applications stems from their high strength, low self-weight and corrosion resistance. In opposition, the high deformability, the susceptibility to instability phenomena and the lack of specific design codes have been hindering a wider use of these advanced composite materials. Several hybrid systems in which GFRP materials are combined with traditional materials, namely concrete, have been proposed in order to overcome the aforementioned limitations of the GFRP material. This paper presents experimental, analytical and numerical investigations about the flexural behaviour of a GFRP-concrete hybrid footbridge prototype comprising two I-shaped GFRP main girders and a thin steel fibre reinforced self-compacting concrete (SFRSCC) deck. With the aim of limiting the structure’s deformability, the footbridge features an external prestress system consisting of two ordinary steel rebars screwed tighten to the structure at the support sections. A small-scale footbridge prototype, 6.0 m long and 2.0 m wide, was built and tested in a 5.5 m simply supported span. The experimental programme included (i) serviceability tests, with and without the application of the external prestress system, and (ii) failure tests. Results of flexural tests proved the feasibility and advantages of the structural concept proposed: the judicious combination of GFRP and SFRSCC enabled the development of a lightweight, high performance and relatively inexpensive structural system for footbridges; furthermore, the external prestress system was very effective in limiting deflections. The analytical and numerical models developed in this study were able to predict with good accuracy (i) the linear elastic behaviour of the structure up to failure, (ii) the effects of the external prestress, and (iii) the failure mode and strength, proving to be accurate tools for the design of GFRP-concrete structural solutions.

In the last few decades, the use of fibre reinforced polymer (FRP) materials in general, and of glass fibre reinforced polymer (GFRP) pultruded profiles in particular, has found a significant increase in civil engineering structural applications. In fact, these materials have high potential for both building and bridge structural applications owing to their high strength, low self-weight, chemical resistance, ease of installation and electromagnetic transparency [1], [2] and [3]. However, the lack of specific standards dealing with the various aspects of the design, the brittle failure, the high deformability and the susceptibility to instability phenomena, which often govern design and seldom allow the full exploitation of the materials’ resistance [4], [5] and [6], have been delaying the widespread use of these materials [7], [8], [9] and [10]. Several hybrid structural systems combining GFRP elements with traditional materials have been proposed in order to overcome the aforementioned limitations while maintaining the main attractiveness of advanced composite structures. In those systems, the careful combination of GFRP with concrete in flexural members has proven to be particularly effective, namely in reducing short- and long-term deformability and in delaying instability phenomena (e.g. [11], [12], [13], [14], [15], [16], [17], [18] and [19]). The research presented in this paper is part of a broader research project – PONTALUMIS – a collaborative study between Instituto Superior Técnico (IST), Minho University (UM) and composites manufacturer ALTO, Perfis Pultrudidos, Lda. This project aims at developing a lightweight, durable and maintenance-free hybrid footbridge made of two I-shaped GFRP pultruded profiles acting as main girders and a steel fibre reinforced self-compacting concrete (SFRSCC) deck. In order to fully understand the feasibility and structural behaviour of the structural system proposed, the research project included the construction of a small-scale prototype, with a length of 6.0 m, approximately half of the length of the full-scale prototype. Previous studies were already performed in order to investigate the structural behaviour of this small-scale prototype, namely in what concerns the following aspects: (i) performance of different shear connection systems used at the GFRP–SFRSCC interface [20]; (ii) modal (dynamic) identification [21]; (iii) dynamic response of the footbridge under pedestrian loads [6]; and (iv) creep behaviour of the footbridge under sustained loads [19]. This paper presents experimental, analytical and numerical investigations about the short-term static behaviour up to failure of the hybrid GFRP–SFRSCC small-scale footbridge prototype. The remainder of the paper is organised as follows. Section 2 describes the underlying structural concept of the footbridge prototype and details its geometry. Section 3 presents the experimental programme, which included the construction of the footbridge prototype, material characterisation tests on the constituent materials and 4-point bending flexural tests, which aimed at evaluating both the serviceability and failure responses of the prototype, as well as to assess the efficacy of an external prestress system in limiting the deformability of the hybrid structure. Sections 4 and 5 present analytical and numerical simulations of the structural behaviour of the footbridge, in which simple analytical formulae and a three-dimensional finite element model, respectively, were used to predict the serviceability and failure responses of the hybrid footbridge structure.

This paper presented a study about (i) the serviceability and failure flexural response of a GFRP-concrete hybrid structure developed for footbridges and (ii) the ability of current analytical and numerical tools in predicting such behaviour. The experimental tests showed that the flexural behaviour of the footbridge prototype is linear-elastic up to failure. Collapse was brittle and triggered by shear failure at the web-flange junction of one of the GFRP profiles. Although no loss of stiffness was observed prior to failure, the high deflections in the brink of collapse (≈L/43.5) should provide a clear warning of structural malfunction. It was also shown that the introduction of external prestress is an effective way to mitigate the instantaneous deflections of GFRP-concrete hybrid structures. Further studies are required to investigate (i) the use of FRP rebars instead of steel to increase durability; (ii) the use of deviators in order to achieve a pseudo-ductile failure (in which the FRP rebars fail prior to the remaining structural components) and; (iii) the long-term behaviour of the prestress solution, including the effects of creep and relaxation. The analytical and numerical models developed in this study were able to predict the serviceability and failure structural responses of the footbridge prototype with good accuracy, proving to be reliable tools for the design of GFRP-concrete hybrid structures. In fact, both types of models were able to predict (i) the linear elastic behaviour of the structure up to failure, (ii) the effects of the external prestress, (iii) the failure mode and location (shear failure in the web-flange junction), and (iv) the strength. In what concerns the analytical models, because maximum shear and axial stresses do not concomitantly develop in the same fibres (particularly for this type of hybrid cross-section), in order to avoid overly conservative strength predictions, the failure criterion should be based on stresses and not on applied forces.