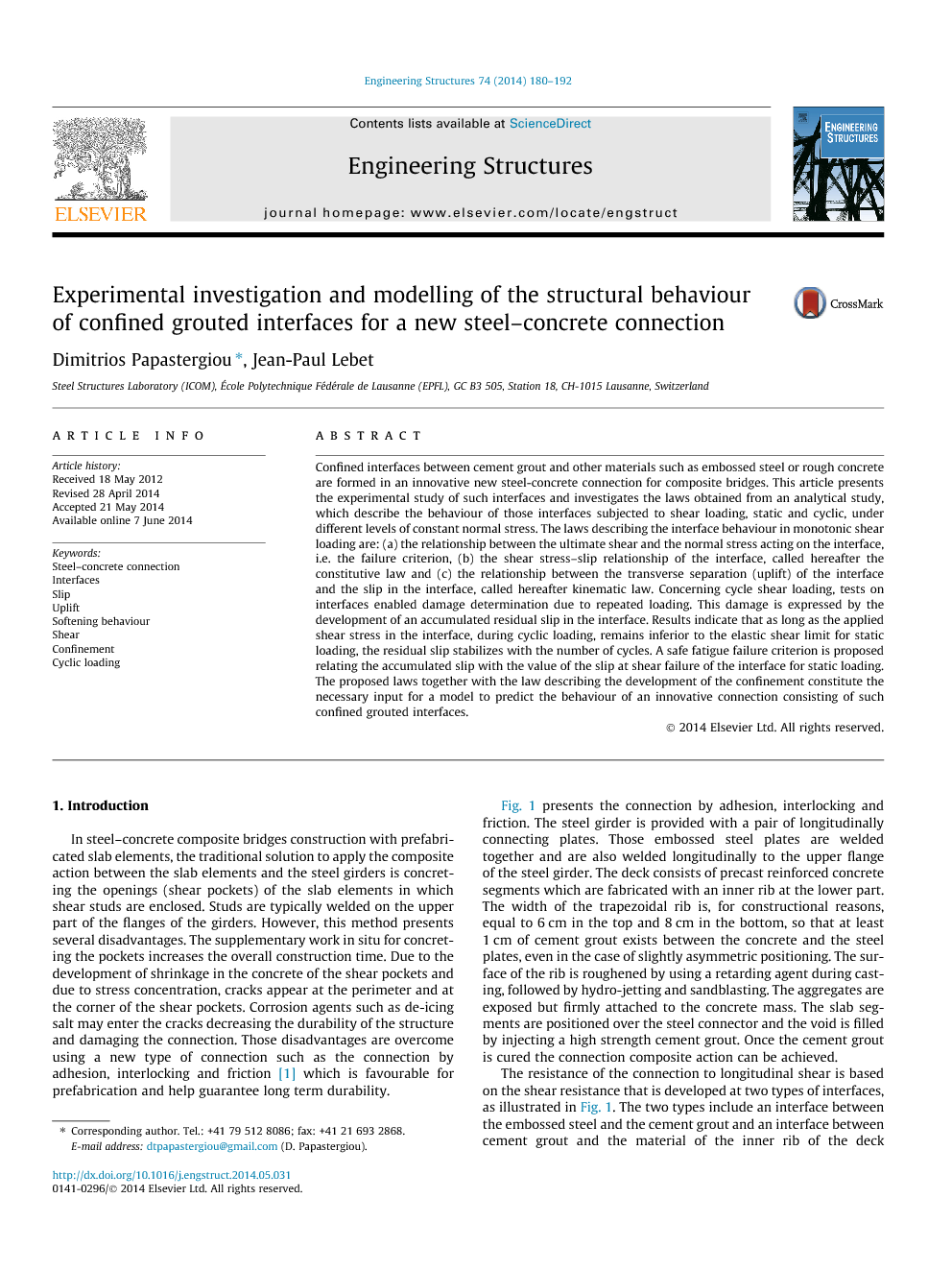 Confined interfaces between cement grout and other materials such as embossed steel or rough concrete are formed in an innovative new steel-concrete connection for composite bridges. This article presents the experimental study of such interfaces and investigates the laws obtained from an analytical study, which describe the behaviour of those interfaces subjected to shear loading, static and cyclic, under different levels of constant normal stress. The laws describing the interface behaviour in monotonic shear loading are: (a) the relationship between the ultimate shear and the normal stress acting on the interface, i.e. the failure criterion, (b) the shear stress–slip relationship of the interface, called hereafter the constitutive law and (c) the relationship between the transverse separation (uplift) of the interface and the slip in the interface, called hereafter kinematic law. Concerning cycle shear loading, tests on interfaces enabled damage determination due to repeated loading. This damage is expressed by the development of an accumulated residual slip in the interface. Results indicate that as long as the applied shear stress in the interface, during cyclic loading, remains inferior to the elastic shear limit for static loading, the residual slip stabilizes with the number of cycles. A safe fatigue failure criterion is proposed relating the accumulated slip with the value of the slip at shear failure of the interface for static loading. The proposed laws together with the law describing the development of the confinement constitute the necessary input for a model to predict the behaviour of an innovative connection consisting of such confined grouted interfaces.

In steel–concrete composite bridges construction with prefabricated slab elements, the traditional solution to apply the composite action between the slab elements and the steel girders is concreting the openings (shear pockets) of the slab elements in which shear studs are enclosed. Studs are typically welded on the upper part of the flanges of the girders. However, this method presents several disadvantages. The supplementary work in situ for concreting the pockets increases the overall construction time. Due to the development of shrinkage in the concrete of the shear pockets and due to stress concentration, cracks appear at the perimeter and at the corner of the shear pockets. Corrosion agents such as de-icing salt may enter the cracks decreasing the durability of the structure and damaging the connection. Those disadvantages are overcome using a new type of connection such as the connection by adhesion, interlocking and friction [1] which is favourable for prefabrication and help guarantee long term durability. Fig. 1 presents the connection by adhesion, interlocking and friction. The steel girder is provided with a pair of longitudinally connecting plates. Those embossed steel plates are welded together and are also welded longitudinally to the upper flange of the steel girder. The deck consists of precast reinforced concrete segments which are fabricated with an inner rib at the lower part. The width of the trapezoidal rib is, for constructional reasons, equal to 6 cm in the top and 8 cm in the bottom, so that at least 1 cm of cement grout exists between the concrete and the steel plates, even in the case of slightly asymmetric positioning. The surface of the rib is roughened by using a retarding agent during casting, followed by hydro-jetting and sandblasting. The aggregates are exposed but firmly attached to the concrete mass. The slab segments are positioned over the steel connector and the void is filled by injecting a high strength cement grout. Once the cement grout is cured the connection composite action can be achieved.The resistance of the connection to longitudinal shear is based on the shear resistance that is developed at two types of interfaces, as illustrated in Fig. 1. The two types include an interface between the embossed steel and the cement grout and an interface between cement grout and the material of the inner rib of the deck (fabricated from either roughened concrete or ultra high performance fibre reinforced concrete UHPFRC). Due to the development of the longitudinal shear, τ, in the connection, interfaces tend to slip, see Fig. 2. Due to the roughness of the interface, this slip, s, is accompanied by a separation of materials, called uplift, u, at a direction normal to the slip, s. This uplift, u, is however restrained due to the confinement effect, normal stress, σ, created by the surrounding concrete slab. An equilibrium state is developed with tension in the concrete and in the reinforcement of the concrete slab and normal compression stresses developed on the interfaces. Fig. 3 illustrates the equilibrium state caused by the uplift in the embossed steel–cement grout interface. Equally, uplift between the roughened concrete and cement grout is also developed but not presented in this figure. The confinement effect provided by the slab on the interfaces of the connection becomes even more significant if, in addition, normal forces resulting from the transversal bending of the slab are considered.In order to predict the connection behaviour under static and cyclic loading a necessary first step is to develop laws that describe the behaviour of interfaces subjected simultaneously to shear loading and normal stresses and second step to develop the law for the confinement effect and the interaction of this law with the interfaces laws. This papers answer to the first step proposing laws for describing the governing behaviour of the confined interfaces under static and cyclic loading.

This paper presents the laws that describe the behaviour of confined interfaces subjected to shear loading. An extensive experimental investigation enabled the calibration of the proposed laws. Interface behaviour is described by the failure criteria, the constitutive law and the kinematic law. Important conclusions are drawn from the performed work: (1) The shear resistance of the interface, for the specific range of normal stress used in testing, is the contribution of two factors, firstly the combined effect of adhesion and interlocking, expressed by a constant and secondly the developed friction which is proportional to the normal stress acting on the interface. (2) Prior to failure, the shear stress–slip relationship presents initially a linear elastic behaviour with high stiffness till a specific value which is a fraction of the ultimate resistance. A yielding plastic branch follows with increasing resistance up to the failure of the interface. (3) Failure occurs in the interface for a specific value of the uplift, independent of the normal stress. Further shear loading after failure, under constant normal stress, results in further increase of the slip and uplift. This opening of the interface leads to an exponential decay of the contribution of adhesion and interlocking and the further slip leads to a gradual decrease of the friction coefficient due to the damage of the undulations of the failed surface. Hence the overall post-failure behaviour is described by a softening branch. (4) Constant amplitude cyclic loading of the interface, under constant normal stress, results in damage expressed by a residual slip. Equally the slip under the maximum cyclic shear stress increases with the number of cycles. Failure due to cyclic loading occurs when the slip under the maximum cyclic shear stress reaches the value of failure slip for static loading. (5) As long as the applied cyclic shear stress remains below the elastic limit for static loading the residual slip and the slip under maximum cyclic shear stress increase but with a decreasing rate with repeated loading. Analytical expressions were developed to describe this evolution, and in addition, enable to estimate the number of cycles for failure of the interface. (6) The interface behaviour at ultimate limit state that follows a previous cyclic loading is limited inside the envelope of the constitutive law for static loading. The failure criterion, the constitutive and the kinematic law can be used together with the law that describes the confinement effect in order to predict the behaviour of such interfaces found in the new shear connection. The interface behaviour for non constant normal stress on the interface should take into account the interaction between the proposed laws presented here and the law for the confinement effect as well.