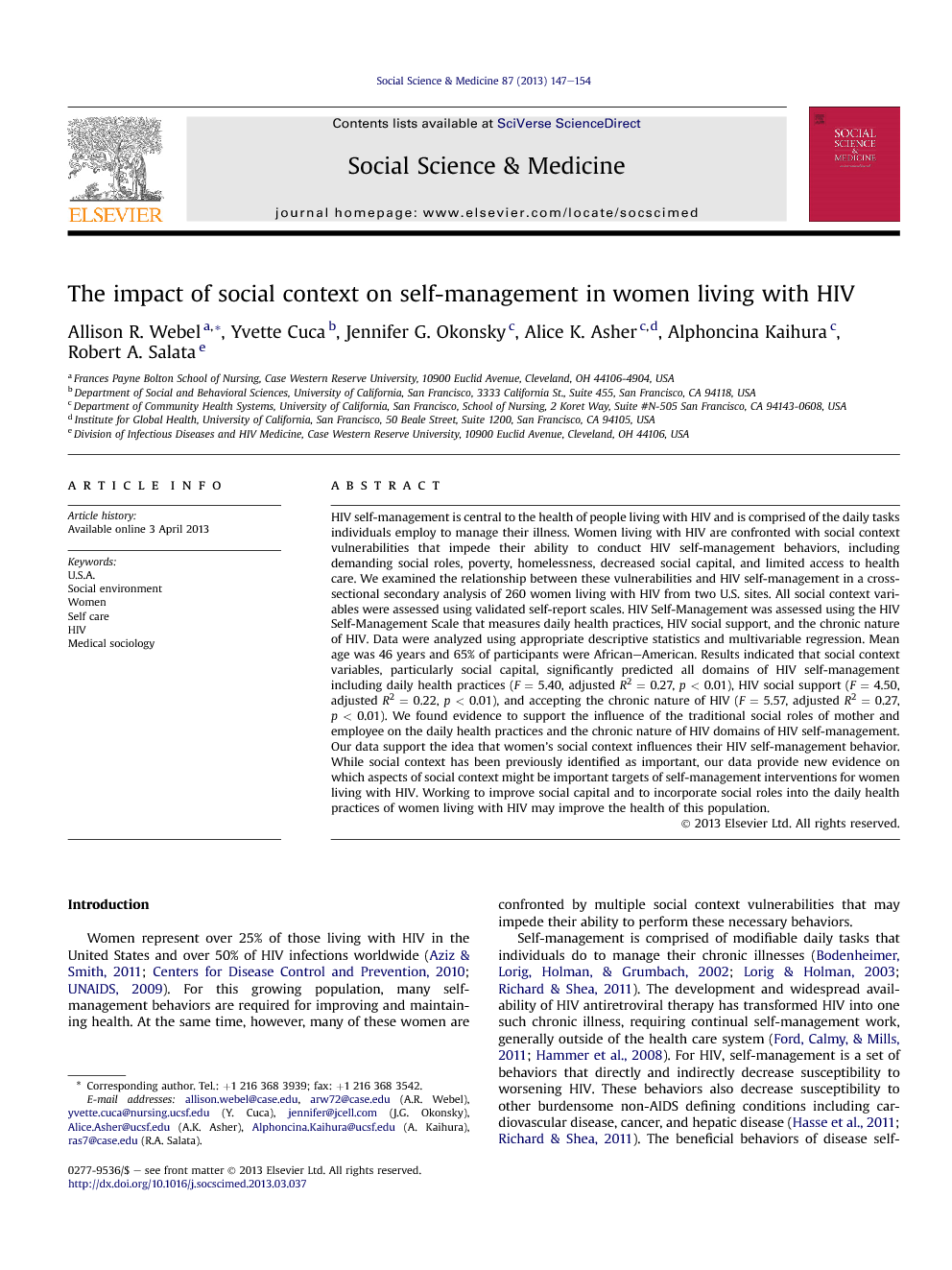 Women represent over 25% of those living with HIV in the United States and over 50% of HIV infections worldwide (Aziz & Smith, 2011; Centers for Disease Control and Prevention, 2010; UNAIDS, 2009). For this growing population, many self-management behaviors are required for improving and maintaining health. At the same time, however, many of these women are confronted by multiple social context vulnerabilities that may impede their ability to perform these necessary behaviors. Self-management is comprised of modifiable daily tasks that individuals do to manage their chronic illnesses (Bodenheimer, Lorig, Holman, & Grumbach, 2002; Lorig & Holman, 2003; Richard & Shea, 2011). The development and widespread availability of HIV antiretroviral therapy has transformed HIV into one such chronic illness, requiring continual self-management work, generally outside of the health care system (Ford, Calmy, & Mills, 2011; Hammer et al., 2008). For HIV, self-management is a set of behaviors that directly and indirectly decrease susceptibility to worsening HIV. These behaviors also decrease susceptibility to other burdensome non-AIDS defining conditions including cardiovascular disease, cancer, and hepatic disease (Hasse et al., 2011; Richard & Shea, 2011). The beneficial behaviors of disease self-management include common health promoting activities such as eating a healthy diet or engaging in physical activity; health maintenance activities including medication adherence and accessing appropriate medical services; improving psychological and emotional functioning through self-efficacy and empowerment exercises and reducing negative emotional states; and improving social relationships by developing collaborative relationships with health care providers, developing and using a positive social support network, and coping with HIV stigma (Swendeman, Ingram, & Rotheram-Borus, 2009). Most self-management interventions have focused on HIV medication adherence or safe sex (Lyles et al., 2007; Rueda et al., 2006; Sandelowski, Voils, Chang, & Lee, 2009), however there is great opportunity within the field to adopt a more holistic approach and target the upstream behaviors to promote the overall health of the person living with HIV (High et al., 2012). For people living with HIV, self-management is a lifelong endeavor, and one that may be substantially affected by the social contexts in which they live.

Two hundred and sixty women living with HIV completed the survey. The mean age of the participants was 46 years (±9.3). Most were African American (65%), 35% had completed 11th grade or less; 40% had a high school degree; 82% had permanent housing. The median annual income was $10,000 (Interquartile range was $6000–12,614) and 94% of the participants reported having health insurance, (87% being public insurance). Of the social roles experienced by our participants, 86% were mothers but only 31% had children living at home with them; 17% were wives, and 21% were employees. The mean perceived social capital score was 2.73 (±0.56), indicating that our participants perceived that they had above average social capital. The mean access to care score was 21.45 (±5.62) indicating that our participants, on average, had adequate access to health care resources. Self-management scores varied by domain; the mean daily self-management health practices score was 2.19 (±0.53); the mean social support domain of the HIV self-management scale was 2.0 (±0.88), and the mean chronic nature of HIV score was 2.64 (±0.43). Taken together, these self-management scores can be interpreted as a moderate level of HIV self-management, with the chronic nature of HIV being the most strongly practiced domain. Additional information on the characteristics of the participants can be found in Table 1.