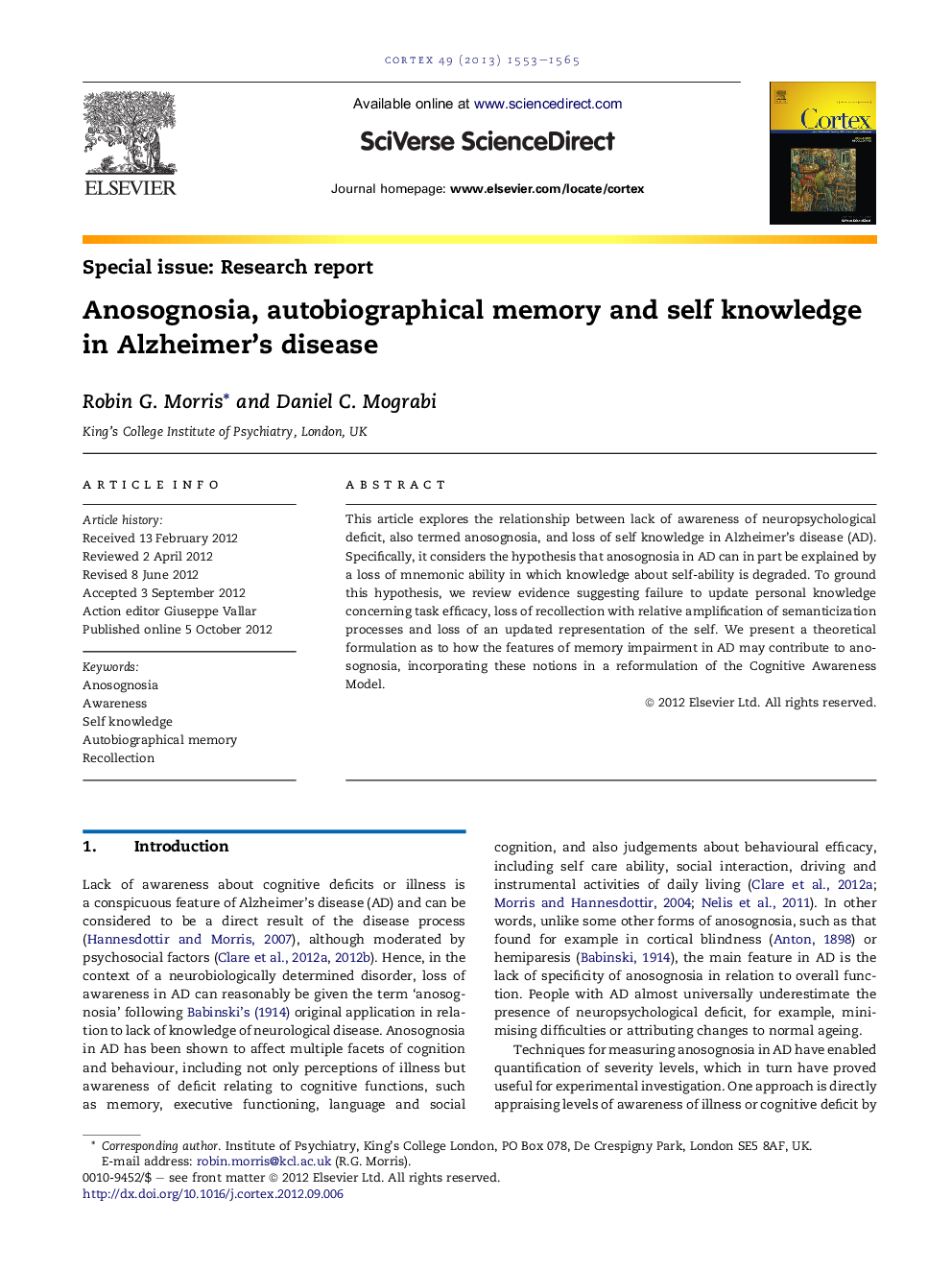 This article explores the relationship between lack of awareness of neuropsychological deficit, also termed anosognosia, and loss of self knowledge in Alzheimer's disease (AD). Specifically, it considers the hypothesis that anosognosia in AD can in part be explained by a loss of mnemonic ability in which knowledge about self-ability is degraded. To ground this hypothesis, we review evidence suggesting failure to update personal knowledge concerning task efficacy, loss of recollection with relative amplification of semanticization processes and loss of an updated representation of the self. We present a theoretical formulation as to how the features of memory impairment in AD may contribute to anosognosia, incorporating these notions in a reformulation of the Cognitive Awareness Model.

To summarise, different strands of evidence point to the potential link between unawareness in AD and loss of recollective ability and self knowledge. The studies reviewed suggest that AD patients have difficulties retrieving episodic detail and that most of their available memories about self-ability belong to more remote periods and are recalled in semanticized form, lacking autonoetic features. The evidence suggests impairment in consolidating information about performance failure in order to provide the basis of accurate appraisal of neuropsychological functioning. Unawareness is a heterogeneous condition, and theories concerning anosognosia have to encompass this multiplicity, with no single explanation which can cover all its cases and causes. The current review points to a potential hypothesis in relation to AD and presents a formulation of the CAM model that can be relevant to other clinical causes of anosognosia and so may serve as a theoretical framework for future research studies. It predicts that multiple dissociations can be found in the relationship between awareness and memory, with differential effects according to the mnemonic ability affected (e.g., working memory is needed for online error monitoring, while loss of recent personal semantics may lead to an outdated sense of self-ability); few studies, however, have explored dissociations within memory and their relation with unawareness and there is the need for further studies exploring the association between autobiographical memories, self knowledge and anosognosia in AD. Finally, studies exploring the first/third-person perspective dissociation may be especially relevant for clinical approaches investigating unawareness in neurological conditions. Anosognosia has been shown to have an impact in treatment compliance and patient safety (Starkstein et al., 2007; Wild and Cottrell, 2003) and stultifies caregiver interaction (Seltzer et al., 1997), as such deserving special attention in clinical settings. Our approach highlights that anosognosia in AD may have a heterogeneous aetiology, and determining the main causal factors for particular people will have consequences in attempts to remediate it. For example, in people with AD who have mainly executive anosognosia, effort could be made to enhance error monitoring. By contrast, where the mnemonic form of anosognosia is prominent, a person might benefit from memory rehabilitation techniques to enhance recollection and consolidation of current personal knowledge.