عنوان انگلیسی
A lack of self-consciousness in Asperger's disorder but not in PDDNOS: Implication for the clinical importance of ASD subtypes
دانلود فوری مقاله + سفارش ترجمه 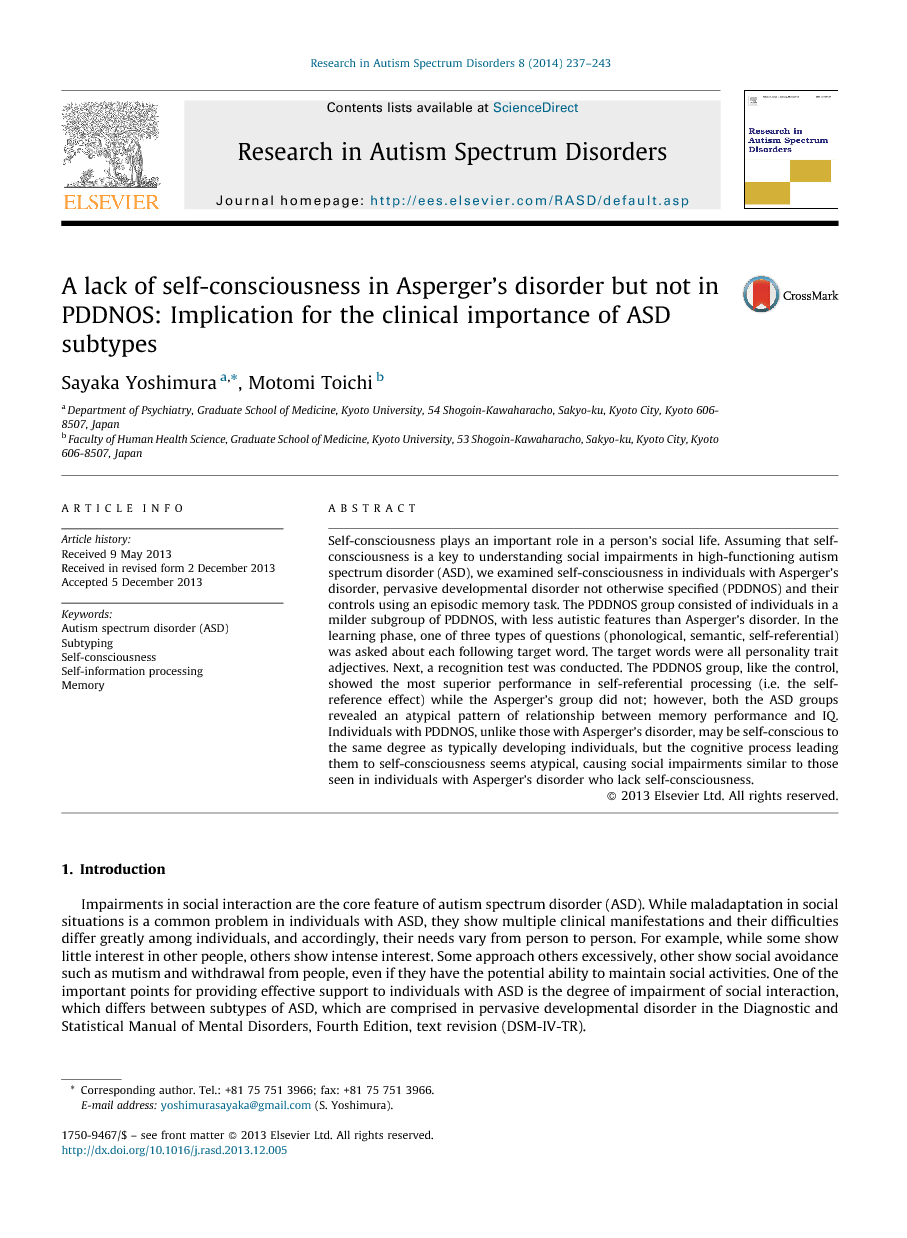 Impairments in social interaction are the core feature of autism spectrum disorder (ASD). While maladaptation in social situations is a common problem in individuals with ASD, they show multiple clinical manifestations and their difficulties differ greatly among individuals, and accordingly, their needs vary from person to person. For example, while some show little interest in other people, others show intense interest. Some approach others excessively, other show social avoidance such as mutism and withdrawal from people, even if they have the potential ability to maintain social activities. One of the important points for providing effective support to individuals with ASD is the degree of impairment of social interaction, which differs between subtypes of ASD, which are comprised in pervasive developmental disorder in the Diagnostic and Statistical Manual of Mental Disorders, Fourth Edition, text revision (DSM-IV-TR). Subtyping is an important factor related to various clinical manifestation of ASD. Based on the major diagnostic criteria, such as DSM-IV-TR and the 10th edition of the International Classification of Disease (ICD-10), ASD comprises autistic disorder (autism), Asperger's disorder (Asperger's syndrome) (AS) and pervasive developmental disorder, not otherwise specified (pervasive developmental disorder, unspecified) (PDDNOS). Epidemiological studies have reported that PDDNOS is the most common ASD (Baird et al., 2006 and Chakrabarti and Fombonne, 2001). PDDNOS is used as a residual category containing heterogeneous subgroups with varying degrees of autistic symptoms such as an autism-like subgroup with late onset (i.e. atypical autism in ICD-10), an Asperger-like subgroup with low intellectual ability and a subgroup whose symptoms are milder than Asperger's disorder. In individuals with ASD, having mild symptomatology does not always mean that their difficulties are mild. For example, in individuals in the milder-symptom subgroup of PDDNOS, their diagnosis is frequently overlooked and they receive little support, although they have the same difficulties in interpersonal relationship as individuals with other ASD, often suffering from an overwhelming stress and psychiatric problems such as anxiety and depression. The above clinical observations raise the following questions: why the difficulties seen in the milder subgroup of PDDNOS were not less severe (sometimes even more severe) than other ASD despite the milder symptoms, and why they frequently show comorbid stress-related psychiatric conditions. Considering that anxiety/depression is generally related to the degree of the development of self-awareness, it is suspected that people in the above subgroup of PDDNOS might be more able to be aware of their own maladaptation in daily life than those with autism or Asperger's disorder, leading to psychiatric problems such as anxiety. Previous studies suggested that self-consciousness, which is a type of self-awareness requiring a representation of self and others, is impaired in ASD; for example, a lack of self-conscious reactions in a mirror-rouge test (Dawson and McKissick, 1984 and Neuman and Hill, 1978), impaired autonoetic (self-knowing) consciousness (Bowler et al., 2000, Bowler et al., 2007 and Tanweer et al., 2010), failure to distinguish themselves from others (Jordan, 1989 and Lee et al., 1994), poorer memory for self- versus peer performed events (Millward, Powell, Messer, & Jordan, 2000), lack of viewing themselves as embedded within social contexts (Lee & Hobson, 1998) and identifying their own emotional states (Silani et al., 2008). Some theorists propose that impaired self-consciousness may be fundamental to social impairments in ASD (Frith & Happé, 1999). The notion that ASD is characterized by impairments in Theory of Mind (ToM) drew considerable attention of researchers and clinicians. Frith and Happé (1999) argued that people with autistic disorder might have as little awareness of their own mental state as awareness of the mental states of other people (i.e. ToM). It is well known that many individuals with high-functioning ASD pass the ToM tasks. Therefore, it is of interest whether such individuals develop self-consciousness or not. Self-consciousness is generally difficult to quantify; however, there is a paradigm in memory research that seems more suitable for the quantitative evaluation of self-consciousness than other methodologies, which is called the self-reference effect (SRE). SRE is a phenomenon in which self-related encoding enhances episodic memory better than encoding in other ways (e.g. phonological encoding, general semantic encoding, other-related encoding) (Rogers et al., 1977 and Symons and Johnson, 1997 for review). When a person exhibits SRE, this means that the individual has a highly organized self-concept (leading them to use the self as an effective memory organizational system). It is acknowledged that healthy adults show SRE robustly (Symons & Johnson, 1997) with emergence in at least middle childhood (Pullyblank, Bisanz, Scott, & Champion, 1985). The typical self-reference task was developed as an extension of the levels-of-processing task (Rogers, Kuiper, & Kirker, 1977). This task generates the levels-of-processing effect (Craik & Tulving, 1975), a phenomenon that semantic encoding results in superior memory performance to “shallow”(phonological and graphic) encoding. The levels-of-processing effect is also robust in typically developing individuals (Geis and Hall, 1976, Geis and Hall, 1978 and Owings and Baumeister, 1979). The first study that examined the levels-of-processing effect in ASD (Toichi & Kamio, 2002) found a lack of the effect in individuals with autistic disorder with/without mild intellectual disability (but see Toichi et al., 2002). While absence of the SRE in ASD has also been reported in previous studies (Henderson et al., 2009 and Toichi et al., 2002), one study reported that adults with ASD showed SRE to some extent (Lombardo, Barnes, Wheelwright, & Baron-Cohen, 2007). Thus it remained inconclusive whether ASD individuals show impaired self-consciousness or not. Considering the possibility that the development of self-consciousness might differ between ASD subtypes with varying severity of autistic symptoms, we examined self-consciousness in AS and the mildest subgroup of PDDNOS using the SRE paradigm. We predicted that the PDDNOS group, like typically developing individuals, would show SRE, which may partly account for the development of secondary psychiatric symptoms seen in ASD with the mildest autistic features.