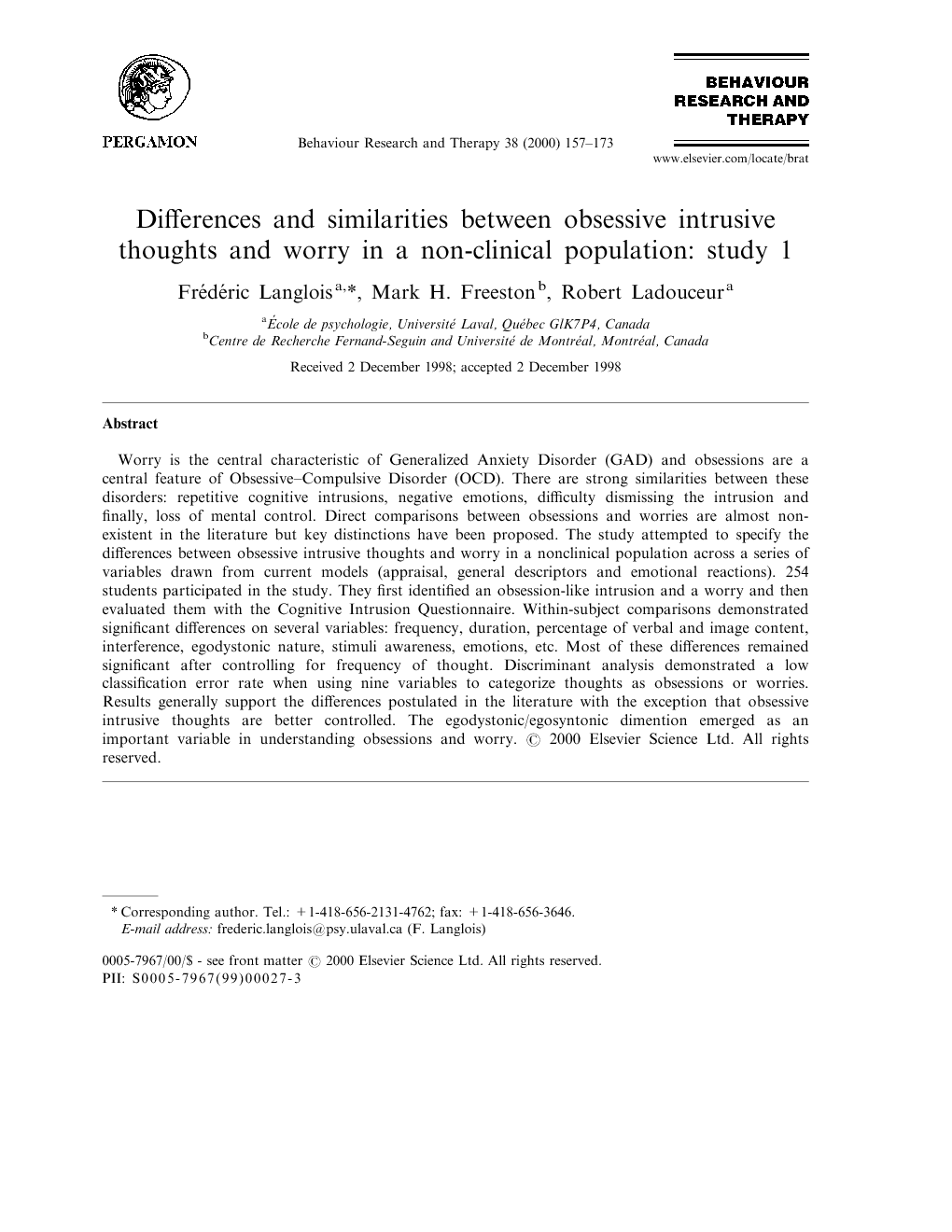 Worry is the central characteristic of Generalized Anxiety Disorder (GAD) and obsessions are a central feature of Obsessive–Compulsive Disorder (OCD). There are strong similarities between these disorders: repetitive cognitive intrusions, negative emotions, difficulty dismissing the intrusion and finally, loss of mental control. Direct comparisons between obsessions and worries are almost non-existent in the literature but key distinctions have been proposed. The study attempted to specify the differences between obsessive intrusive thoughts and worry in a nonclinical population across a series of variables drawn from current models (appraisal, general descriptors and emotional reactions). 254 students participated in the study. They first identified an obsession-like intrusion and a worry and then evaluated them with the Cognitive Intrusion Questionnaire. Within-subject comparisons demonstrated significant differences on several variables: frequency, duration, percentage of verbal and image content, interference, egodystonic nature, stimuli awareness, emotions, etc. Most of these differences remained significant after controlling for frequency of thought. Discriminant analysis demonstrated a low classification error rate when using nine variables to categorize thoughts as obsessions or worries. Results generally support the differences postulated in the literature with the exception that obsessive intrusive thoughts are better controlled. The egodystonic/egosyntonic dimention emerged as an important variable in understanding obsessions and worry.

According to the DSM-IV, worry is the central characteristic of Generalized Anxiety Disorder (GAD) (APA, 1994) and obsessions are a central feature of Obsessive–Compulsive Disorder (OCD). Even though these disorders seem relatively easy to distinguish (Brown, Moras, Zinbarg & Barlow, 1993), few studies have directly addressed the degree of overlap between obsessions and worry. There are strong similarities between these two disorders: repetitive cognitive intrusions, negative emotions, difficulty dismissing the intrusion and finally, loss of mental control (Freeston & Ladouceur, 1993; Turner, Beidel & Stanley, 1992). It is thus relevant to examine whether obsessive intrusive thoughts and worries are distinct processes. The present study aims to specify the differences between obsessive intrusive thoughts and worry in a nonclinical population across a series of variables drawn from current models (appraisal, general descriptors and emotional reactions). Borkovec, Robinson, Pruzinsky and DePree (1983) described worry as a “chain of thoughts and images, negatively affect-laden and relatively uncontrollable”. The worry process can also be considered as an attempt to engage in mental problem solving of real or fictional issues whose outcome is uncertain but contains the possibility of one or more negative outcomes (Borkovec et al., 1983). Worries typically concern life circumstances such as health, finance, family and work. According to Mathews (1990), worry may be interpreted as a way to reduce the probability of future negative outcomes. Worry is an unpleasant experience due to its uncontrollability. Some studies have shown that worry is predominantly experienced in a verbal form rather than in images (Borkovec & Lyonfields, 1993; Freeston, Dugas & Ladouceur, 1996). Finally, Borkovec and his colleagues suggest that worry is a way of controlling unpleasant physiological activation that is associated with images (e.g. Roemer & Borkovec, 1993). According to the DSM-IV, obsessions are defined by four criteria: (1) recurrent and persistent thoughts, impulses, or images that are experienced, at some time during the disturbance, as intrusive and inappropriate and that cause marked anxiety or distress; (2) the thoughts, impulses, or images are not simply excessive worries about real-life problems; (3) the person attempts to ignore or suppress such thoughts, impulses, or images or to neutralize them with some other thought or action; (4) the person recognizes that the obsessional thoughts, impulses, or images are a product of his or her own mind (not imposed from without as in thought insertion) (see APA, 1994). Obsessions may concern aggression, sexuality, religion and morality, but common forms refer to contamination and doubts about possible mistakes or catastrophes (Turner et al., 1992). A number of theoretical models of OCD have been proposed. The most influential over the last decade postulates that people with OCD appraise intrusive thoughts as a function of threats that may happen to others or oneself (Salkovskis, 1985). An excessive sense of responsibility for the thoughts or the outcome makes the person feel very uncomfortable (e.g. I could be responsible for a car crash). The person will try to neutralize the thought by seeking reassurance, checking or using other neutralizing behaviors. Other authors propose that perfectionism as well as control of thoughts and actions are also involved in OCD Steketee, 1993 and Rhéaume, Ladouceur, Freeston, & Letarte, 1994. Finally, others have emphasized the over-importance of thoughts such as thought-action-fusion (Rachman, Thordarson, Shafran & Woody, 1995; Freeston, Rhéaume & Ladouceur, 1996). A strong overlap between obsessions and worries would suggest a high rate of comorbidity between GAD and OCD. However, studies report only a low rate of comorbidity ranging from 0 to 13% (see Crino & Andrews, 1996). Moreover, people with OCD or GAD were differentiated on self-report measures of key characteristics of GAD and OCD (Brown, Dowdall, Côté & Barlow, 1994). Other studies suggest a higher rate of comorbidity. For example, Crino and Andrews (1996) found that 35% of people with a principal diagnosis of OCD, had a lifetime history of GAD. Finally, another recent study reported the comorbidity of GAD among people with OCD at 20% (Abramowizt & Foa, 1998).