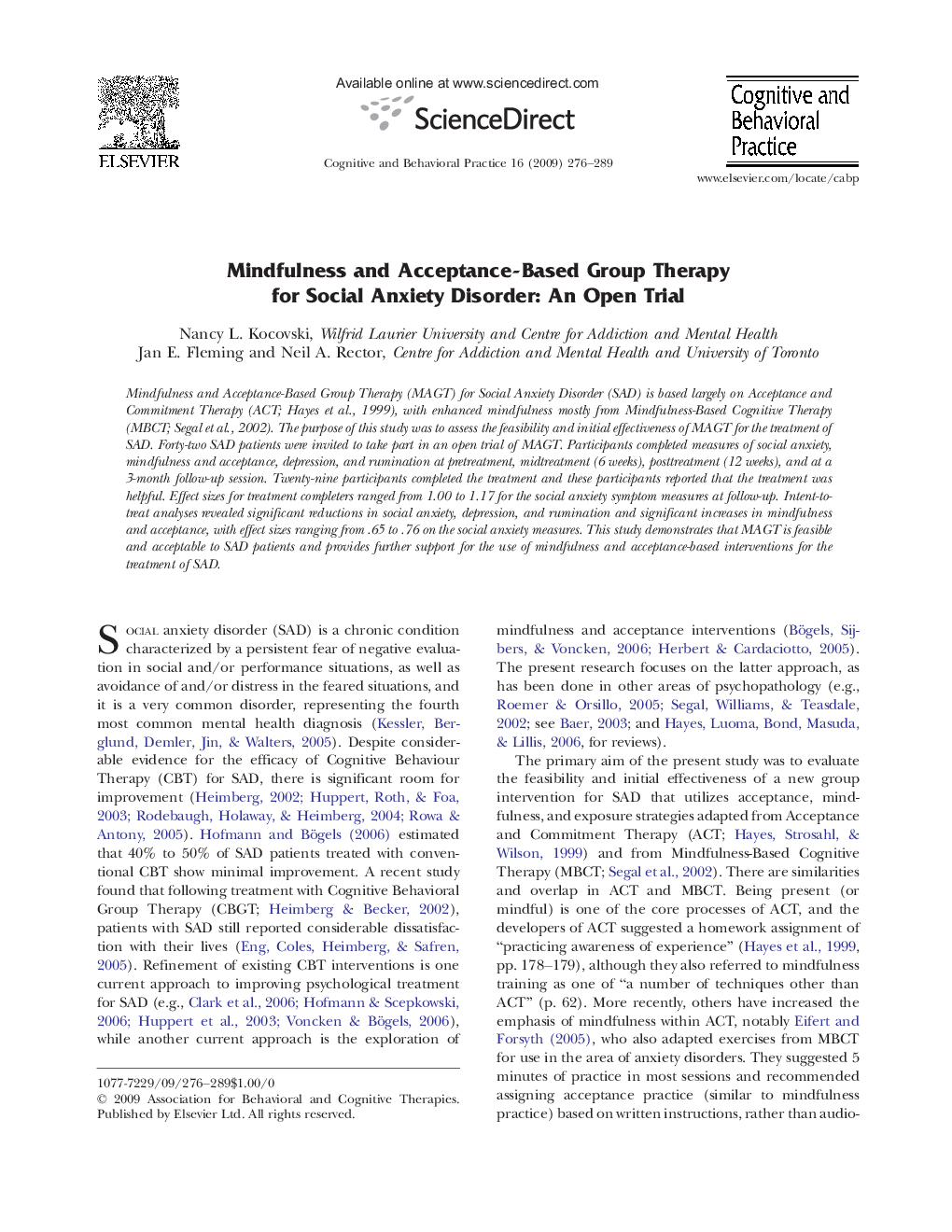 Mindfulness and Acceptance-Based Group Therapy (MAGT) for Social Anxiety Disorder (SAD) is based largely on Acceptance and Commitment Therapy (ACT; Hayes et al., 1999), with enhanced mindfulness mostly from Mindfulness-Based Cognitive Therapy (MBCT; Segal et al., 2002). The purpose of this study was to assess the feasibility and initial effectiveness of MAGT for the treatment of SAD. Forty-two SAD patients were invited to take part in an open trial of MAGT. Participants completed measures of social anxiety, mindfulness and acceptance, depression, and rumination at pretreatment, midtreatment (6 weeks), posttreatment (12 weeks), and at a 3-month follow-up session. Twenty-nine participants completed the treatment and these participants reported that the treatment was helpful. Effect sizes for treatment completers ranged from 1.00 to 1.17 for the social anxiety symptom measures at follow-up. Intent-to-treat analyses revealed significant reductions in social anxiety, depression, and rumination and significant increases in mindfulness and acceptance, with effect sizes ranging from .65 to .76 on the social anxiety measures. This study demonstrates that MAGT is feasible and acceptable to SAD patients and provides further support for the use of mindfulness and acceptance-based interventions for the treatment of SAD.

Social anxiety disorder (SAD) is a chronic condition characterized by a persistent fear of negative evaluation in social and/or performance situations, as well as avoidance of and/or distress in the feared situations, and it is a very common disorder, representing the fourth most common mental health diagnosis (Kessler, Berglund, Demler, Jin, & Walters, 2005). Despite considerable evidence for the efficacy of Cognitive Behaviour Therapy (CBT) for SAD, there is significant room for improvement (Heimberg, 2002, Huppert et al., 2003, Rodebaugh et al., 2004 and Rowa and Antony, 2005). Hofmann and Bögels (2006) estimated that 40% to 50% of SAD patients treated with conventional CBT show minimal improvement. A recent study found that following treatment with Cognitive Behavioral Group Therapy (CBGT; Heimberg & Becker, 2002), patients with SAD still reported considerable dissatisfaction with their lives (Eng, Coles, Heimberg, & Safren, 2005). Refinement of existing CBT interventions is one current approach to improving psychological treatment for SAD (e.g., Clark et al., 2006, Hofmann and Scepkowski, 2006, Huppert et al., 2003 and Voncken and Bögels, 2006), while another current approach is the exploration of mindfulness and acceptance interventions (Bögels et al., 2006 and Herbert and Cardaciotto, 2005). The present research focuses on the latter approach, as has been done in other areas of psychopathology (e.g., Roemer and Orsillo, 2005 and Segal et al., 2002; see Baer, 2003; and Hayes, Luoma, Bond, Masuda, & Lillis, 2006, for reviews). The primary aim of the present study was to evaluate the feasibility and initial effectiveness of a new group intervention for SAD that utilizes acceptance, mindfulness, and exposure strategies adapted from Acceptance and Commitment Therapy (ACT; Hayes, Strosahl, & Wilson, 1999) and from Mindfulness-Based Cognitive Therapy (MBCT; Segal et al., 2002). There are similarities and overlap in ACT and MBCT. Being present (or mindful) is one of the core processes of ACT, and the developers of ACT suggested a homework assignment of “practicing awareness of experience” (Hayes et al., 1999, pp. 178–179), although they also referred to mindfulness training as one of “a number of techniques other than ACT” (p. 62). More recently, others have increased the emphasis of mindfulness within ACT, notably Eifert and Forsyth (2005), who also adapted exercises from MBCT for use in the area of anxiety disorders. They suggested 5 minutes of practice in most sessions and recommended assigning acceptance practice (similar to mindfulness practice) based on written instructions, rather than audio-recordings. In the present study, mindfulness training played a much larger role in the treatment sessions and homework assignments. Therapeutic strategies from ACT and MBCT were chosen to target the core attentional, cognitive, and behavioral processes that have been shown to maintain SAD. Although these processes were originally identified within a cognitive behavioral model (Clark and Wells, 1995 and Rapee and Heimberg, 1997), they can also be conceptualized within a mindfulness and acceptance framework. Attentional processes include heightened self-focus on public aspects of the self such as visible physical symptoms of anxiety (e.g., blushing, sweating, trembling, etc.) and social performance, as well as external focus on potential threat (such as signs of disapproval from others) (see Bögels & Mansell, 2004, for a review). Cognitive processes include anxious rumination before (i.e., anticipatory processing), during, and after (i.e., post-event processing) social situations with a tendency to dwell on the likelihood of being negatively evaluated by others. Behavioral processes include overt and subtle avoidances (i.e., safety behaviors) that are engaged in to reduce anxiety and negative evaluation. These processes interact to maintain social anxiety.