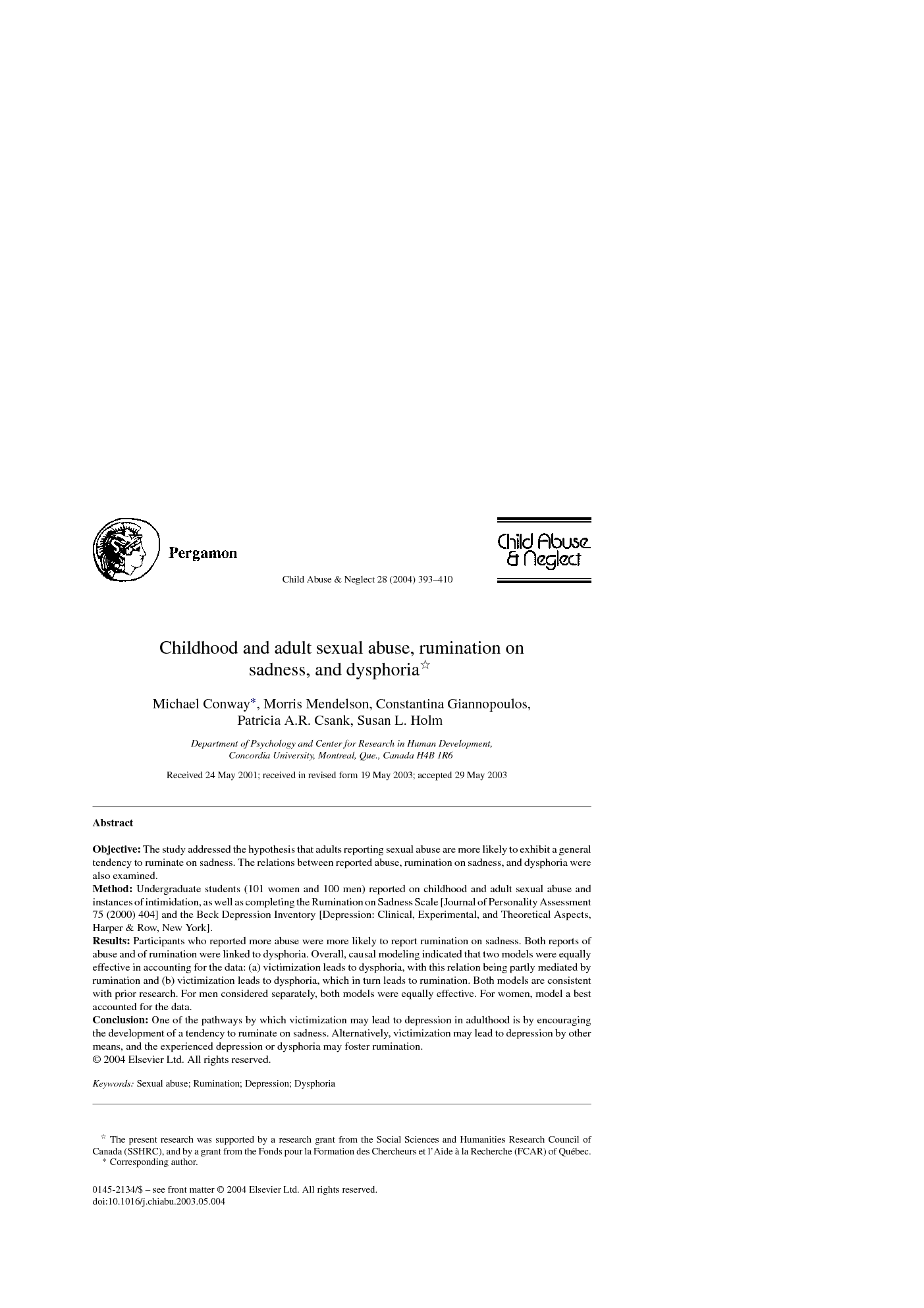 Objective: The study addressed the hypothesis that adults reporting sexual abuse are more likely to exhibit a general tendency to ruminate on sadness. The relations between reported abuse, rumination on sadness, and dysphoria were also examined. Method: Undergraduate students (101 women and 100 men) reported on childhood and adult sexual abuse and instances of intimidation, as well as completing the Rumination on Sadness Scale [Journal of Personality Assessment 75 (2000) 404] and the Beck Depression Inventory [Depression: Clinical, Experimental, and Theoretical Aspects, Harper & Row, New York]. Results: Participants who reported more abuse were more likely to report rumination on sadness. Both reports of abuse and of rumination were linked to dysphoria. Overall, causal modeling indicated that two models were equally effective in accounting for the data: (a) victimization leads to dysphoria, with this relation being partly mediated by rumination and (b) victimization leads to dysphoria, which in turn leads to rumination. Both models are consistent with prior research. For men considered separately, both models were equally effective. For women, model a best accounted for the data. Conclusion: One of the pathways by which victimization may lead to depression in adulthood is by encouraging the development of a tendency to ruminate on sadness. Alternatively, victimization may lead to depression by other means, and the experienced depression or dysphoria may foster rumination.

Having been subjected to sexual abuse in childhood or adulthood is likely to lead adults to experience chronic or recurrent bouts of depression (Andrews, 1995; Andrews, Valentine, & Valentine, 1995; Atkeson, Calhoun, Resick, & Ellis, 1982; Beitchman et al., 1992; Bifulco, Brown, & Adler, 1991; Browne & Finkelhor, 1986; Koss, Dinero, Seibel, & Cox, 1988; Nadelson, Notman, Zackson, & Gornick, 1982; Polusny & Follette, 1995). Victims of sexual abuse may also be prone to ruminate on the abuse itself, and such on-going rumination has been associated with more severe long-term distress (Holman & Silver, 1996). Rumination on being sexually abused can be considered a particular instance of the rumination that may occur as a consequence of traumatic experience (Horowitz, 1976; Tait & Silver, 1989). The present research addressed another type of rumination, that being a general tendency to ruminate on sadness regardless of the particular factors that initiate the sadness. The hypothesis was that adults who report having been sexually abused are generally more likely to ruminate on their feelings of sadness. The rumination would concern their current situation and distress, be of negative content, and would not necessarily relate to earlier abuse. It would include thoughts regarding the antecedents, nature, and consequences of one’s current negative affect. Rumination is not goal-directed and does not lead to plans for remedial action (cf Nolen-Hoeksema, 1991). Rumination is also a solitary activity, and is intrusive if the person is pursuing either self- or situationally-imposed task-oriented goals. Having been sexually abused may lead to a general tendency to ruminate on sadness for a number of reasons. First, victims of sexual abuse may have less trust and be more withdrawn from others, and may have more problematic interpersonal relationships (Browne & Finkelhor, 1986). Consequently, they may be less likely to turn to others for support, which could foster rumination (cf Bodnar & Kiecolt-Glaser, 1994; Nolen-Hoeksema, Parker, & Larson, 1994; Pennebaker & O’Heeron, 1984). Second, abused individuals may feel powerless ( Peterson & Seligman, 1983), discouraging externally-oriented problem solving behavior. Third, abused individuals may generally blame their negative outcomes on their own internal, stable characteristics ( Andrews, 1998 and Gold, 1986; see Briere & Runtz, 1993, for a review), which may foster rumination ( Atlas & Peterson, 1990). Fourth, abused individuals often suffer low self-esteem ( Browne & Finkelhor, 1986). As a result, they may overgeneralize the consequences of negative outcomes ( Kernis, 1993; Kernis, Brockner, & Frankel, 1989). Rumination on sadness is significant, in that it may lead sad people to become more dysphoric or depressed (Lyubomirsky & Nolen-Hoeksema, 1993; Morrow & Nolen-Hoeksema, 1990; Nolen-Hoeksema, McBride, & Larson, 1997; Nolen-Hoeksema & Morrow, 1993; Nolen-Hoeksema, Morrow, & Fredrickson, 1993; also see Just & Alloy, 1997). Other research also suggests that rumination leads to dysphoria: Rumination on sadness mediates the effects of neuroticism on dysphoria (Nolan, Roberts, & Gotlib, 1998; Roberts, Gilboa, & Gotlib, 1998). In addition to rumination leading to dysphoria, the reverse causal link may exist. Being dysphoric or depressed may lead individuals to ruminate on their sadness. Depressed individuals report more negative self-referent thoughts (e.g., “I’m a failure” and “I hate myself”; see Hollon & Kendall, 1980), and this correlation between dysphoria and such negative thoughts may be due to dysphoria leading to negative thoughts, or just as well due to negative self-referent thoughts leading to dysphoria (Kwon & Oei, 1992; also see Stiles & Götestam, 1989). Note that measures of automatic negative thoughts and of rumination overlap. Although the present focus was on sexual abuse, other forms of victimization were also considered as abuse victims often suffer other victimization, such as neglect or maltreatment in the family, violent crimes, and subsequent abusive relationships (Bifulco et al., 1991; Browne & Finkelhor, 1986; Ellis, Atkeson, & Calhoun, 1982; Gidycz, Coble, Latham, & Layman, 1993; Gold, 1986). Some of these other types of victimization may also foster rumination. In the present research, intimidation and humiliation by others as a consequence of one’s gender, sexual orientation, ethnic identity, language spoken (language is a major social concern in Québec), or religion were addressed. Intimidation by others would be another form of victimization suffered by sexual abuse victims, and could occur in the context of abusive intimate relationships, or in other, more transient, social contexts. The expectation in the present research was that people reporting more sexual abuse would also report more intimidation. Being intimidated by others implies powerlessness and may encourage a feeling of stigmatization, both of which may encourage rumination. In the present research, male and female undergraduate students completed questionnaires in which they reported on their history of sexual abuse in childhood and adulthood, and on experiences of intimidation. They also completed a measure of the degree to which they ruminate when feeling sad (regardless of the particular instigators of this sadness), and the Beck Depression Inventory (Beck, 1967). As noted above, the first hypothesis was that greater reports of experienced abuse are associated with a greater current tendency to ruminate on sadness. Other findings were expected to emerge, in light of prior research: (a) people who report more rumination were also expected to report more severe dysphoria on the BDI; (b) people who report more sexual abuse will also report feeling more depressed; and (c) women will report more sexual abuse, more rumination, and more depression than men. The frequency of sexual abuse is estimated to be twice as high for girls than boys (Cutler & Nolen-Hoeksema, 1991; Dhaliwal, Gauzas, Antonowicz, & Ross, 1996), and is substantially higher for women than men (Browne & Finkelhor, 1986). To elucidate the relations between victimization, rumination, and dysphoria, structural equation modeling was applied to the present data. A starting assumption, addressed in the modeling, was that the sexual abuse and intimidation measures could be taken to reflect an underlying victimization construct. For victimization, rumination, and dysphoria, two models were considered. One is Model A: Victimization leads to rumination, which in turn leads to dysphoria. See the ellipses connected by arrows in Figure 1. As well, there would be a direct influence of victimization on dysphoria. The other possibility, referred to as Model B, is that victimization leads to dysphoria, which in turn leads to rumination (see Figure 2).