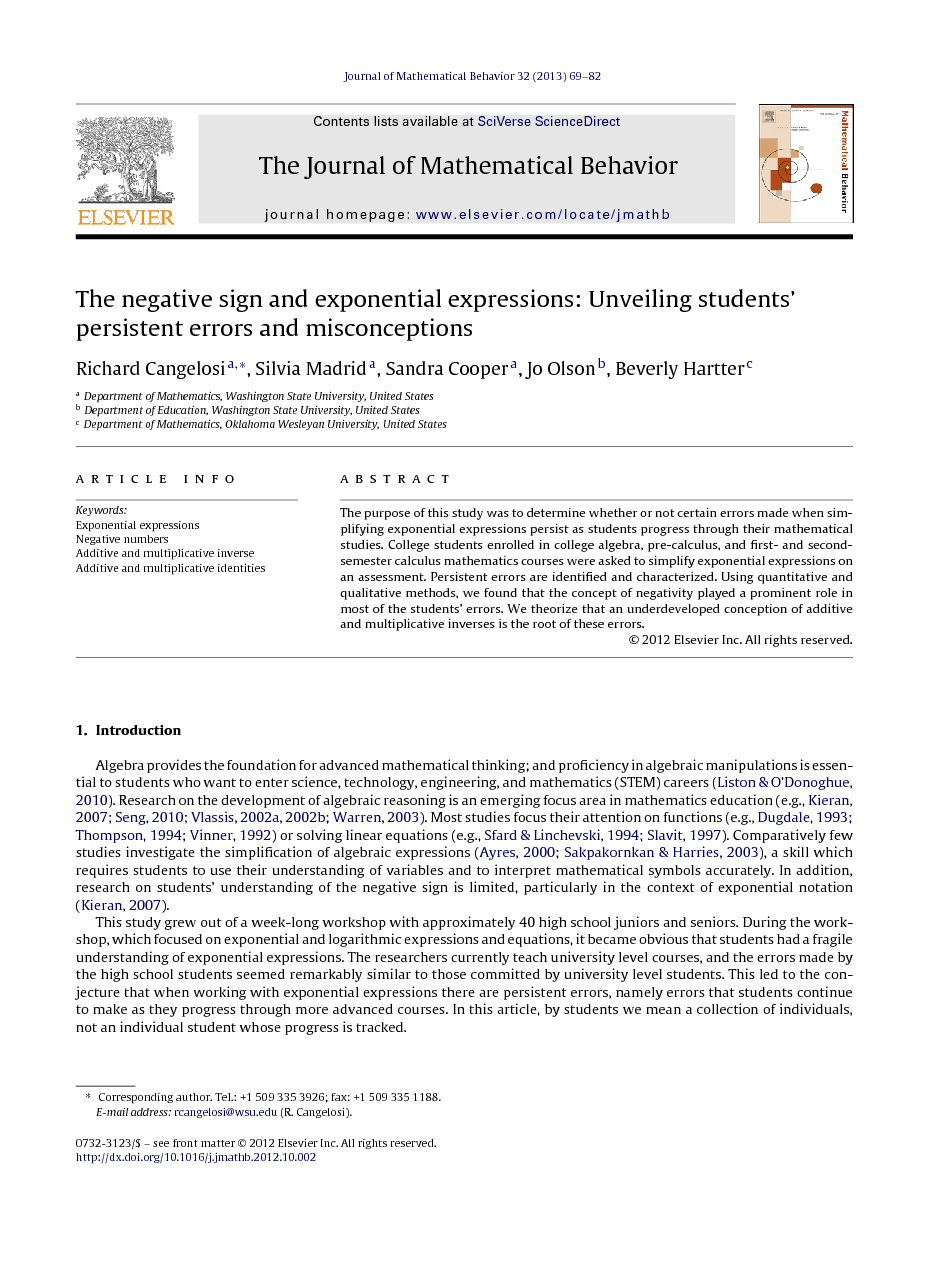 The purpose of this study was to determine whether or not certain errors made when simplifying exponential expressions persist as students progress through their mathematical studies. College students enrolled in college algebra, pre-calculus, and first- and second-semester calculus mathematics courses were asked to simplify exponential expressions on an assessment. Persistent errors are identified and characterized. Using quantitative and qualitative methods, we found that the concept of negativity played a prominent role in most of the students’ errors. We theorize that an underdeveloped conception of additive and multiplicative inverses is the root of these errors.

Algebra provides the foundation for advanced mathematical thinking; and proficiency in algebraic manipulations is essential to students who want to enter science, technology, engineering, and mathematics (STEM) careers (Liston & O’Donoghue, 2010). Research on the development of algebraic reasoning is an emerging focus area in mathematics education (e.g., Kieran, 2007, Seng, 2010, Vlassis, 2002a, Vlassis, 2002b and Warren, 2003). Most studies focus their attention on functions (e.g., Dugdale, 1993, Thompson, 1994 and Vinner, 1992) or solving linear equations (e.g., Sfard and Linchevski, 1994 and Slavit, 1997). Comparatively few studies investigate the simplification of algebraic expressions (Ayres, 2000 and Sakpakornkan and Harries, 2003), a skill which requires students to use their understanding of variables and to interpret mathematical symbols accurately. In addition, research on students’ understanding of the negative sign is limited, particularly in the context of exponential notation (Kieran, 2007). This study grew out of a week-long workshop with approximately 40 high school juniors and seniors. During the workshop, which focused on exponential and logarithmic expressions and equations, it became obvious that students had a fragile understanding of exponential expressions. The researchers currently teach university level courses, and the errors made by the high school students seemed remarkably similar to those committed by university level students. This led to the conjecture that when working with exponential expressions there are persistent errors, namely errors that students continue to make as they progress through more advanced courses. In this article, by students we mean a collection of individuals, not an individual student whose progress is tracked. This lead us to the current study were we investigate the following two research questions: (1) Are there persistent errors made when students simplify exponential expressions as students progress with their mathematical studies? (2) If persistent errors exist, what are they and how can they be categorized? Through this study we discovered that there are persistent errors and these are frequently associated with a negative sign in the expression. We conclude the paper by offering conjectures as to the source of these errors.