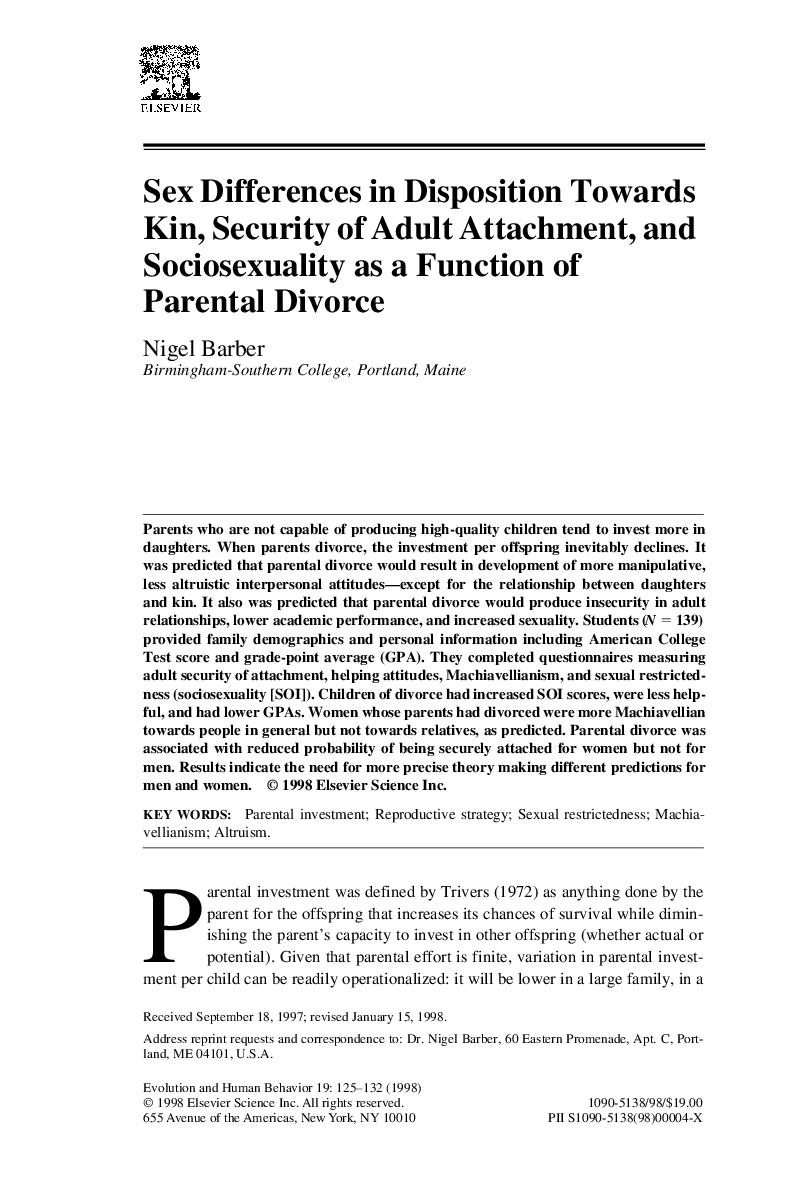 Abstract Parents who are not capable of producing high-quality children tend to invest more in daughters. When parents divorce, the investment per offspring inevitably declines. It was predicted that parental divorce would result in development of more manipulative, less altruistic interpersonal attitudes—except for the relationship between daughters and kin. It also was predicted that parental divorce would produce insecurity in adult relationships, lower academic performance, and increased sexuality. Students (N = 139) provided family demographics and personal information including American College Test score and grade-point average (GPA). They completed questionnaires measuring adult security of attachment, helping attitudes, Machiavellianism, and sexual restrictedness (sociosexuality [SOI]). Children of divorce had increased SOI scores, were less helpful, and had lower GPAs. Women whose parents had divorced were more Machiavellian towards people in general but not towards relatives, as predicted. Parental divorce was associated with reduced probability of being securely attached for women but not for men. Results indicate the need for more precise theory making different predictions for men and women.

3. Results The 31 children of divorce scored higher than the other 108 subjects on SOI (means of 24.19 vs. 11.17), F(1, 130) = 7.17, p < .01. GPA was lower (means of 3.01 vs. 3.23), F(1, 135) = 5.29, p < .05, although ACT scores did not differ (means of 26.78 vs. 26.63), F(1, 126) = 0.04, p > .10. They had lower helping attitudes scores (means of 124.84 vs. 128.90), F(1, 134) = 2.64, p = .05, but did not differ for Machiavellianism. Exploratory analysis of variance (ANOVA) found that subject sex did not interact with any of these factors. However, due to the theoretical interest of sex differences in the impact of divorce on sexual behavior, data were analyzed for each sex separately. One-way ANOVA found that sons of divorce scored higher on SOI, F(1, 61) = 4.01, p = .05, whereas daughters of divorce did not, although data were in this direction, F(1, 67) = 1.75, p > .10. Adult security of attachment was recorded as a binary variable (secure/insecure). This was done because the different types of insecure attachment (anxious and avoidant) were not relevant to the prediction that high levels of parental investment would lead to secure attachment. Logistic regression (which is designed for dichotomous outcomes) was used to investigate predictors of security of attachment. Variables entered into the model included subject sex, parental divorce, and the interaction term. There was no sex difference in security of attachment, Wald (1, 133) = 2.21, p < .10. Students whose parents were divorced were less likely to be securely attached, Wald (1, 133) = 5.75, p < .05. The interaction between subject sex and parental divorce was significant, Wald (1, 133) = 4.47, p < .05. The interaction means that parental divorce was associated with an increased probability of being insecurely attached for women (62% vs. 29%) compared to men (33% vs. 42%). Preliminary correlational analysis indicated that age of participants at parental divorce had no linear relationship with any of the outcomes. Correlational analysis revealed that the relationship between security of attachment and SOI was in a different direction for men and women. An ANOVA was performed with sex and adult security of attachment as the factors and SOI as the dependent variable. Although SOI was unaffected by security of attachment, F(1, 128) = 0.71, p > .10, it was much higher in men than women, F(1, 128) = 55.01, p < .001, and the two variables interacted, F(1, 128), = 5.20, p < .05. This interaction means that, for men, adult security of attachment predicts high SOI, whereas for women it predicts low SOI. It was predicted that declines in social attitudes associated with low parental investment would be moderated by relatedness of social target in the case of women. Specifically, it was predicted that for female children experiencing low parental investment, social attitudes in relation to family members would not decline. ANOVA was carried out with helping attitudes and Machiavellianism as the dependent variables and participant sex, parental divorce, and social target of the questionnaires (people or family) as the factors. The critical three-way interaction was in the predicted direction for Machiavellianism alone, F (1, 135) = 7.90, p < .01. One way of conceptualizing this interaction is to say that low and high PI men did not differ in Machiavellianism towards people in general, but high PI men were less Machiavellian towards relatives. On the other hand, low PI women were more Machiavellian in relation to people in general, but less Machiavellian in relation to relatives than were high PI women ( Table 1).