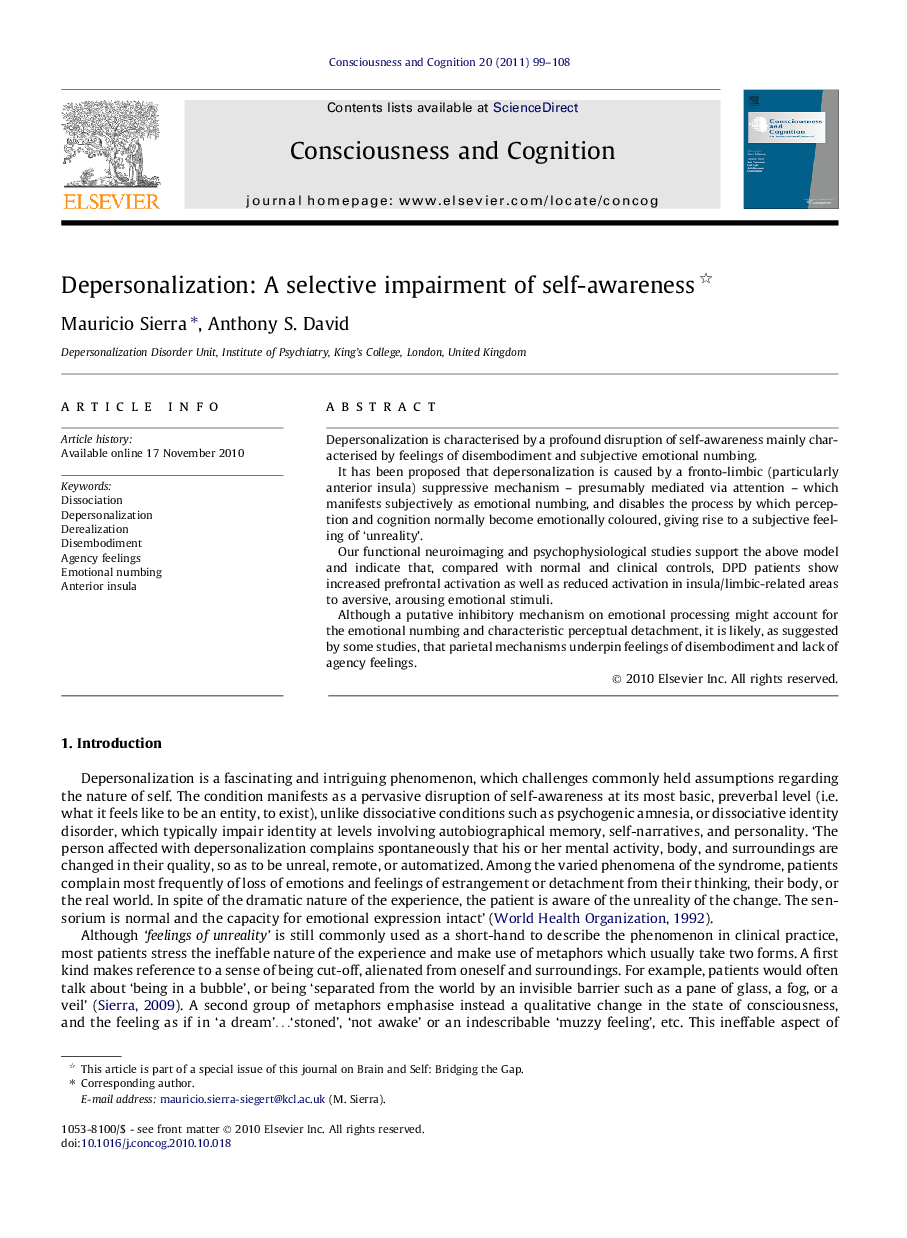 Depersonalization is characterised by a profound disruption of self-awareness mainly characterised by feelings of disembodiment and subjective emotional numbing. It has been proposed that depersonalization is caused by a fronto-limbic (particularly anterior insula) suppressive mechanism – presumably mediated via attention – which manifests subjectively as emotional numbing, and disables the process by which perception and cognition normally become emotionally coloured, giving rise to a subjective feeling of ‘unreality’. Our functional neuroimaging and psychophysiological studies support the above model and indicate that, compared with normal and clinical controls, DPD patients show increased prefrontal activation as well as reduced activation in insula/limbic-related areas to aversive, arousing emotional stimuli. Although a putative inhibitory mechanism on emotional processing might account for the emotional numbing and characteristic perceptual detachment, it is likely, as suggested by some studies, that parietal mechanisms underpin feelings of disembodiment and lack of agency feelings.

Depersonalization is a fascinating and intriguing phenomenon, which challenges commonly held assumptions regarding the nature of self. The condition manifests as a pervasive disruption of self-awareness at its most basic, preverbal level (i.e. what it feels like to be an entity, to exist), unlike dissociative conditions such as psychogenic amnesia, or dissociative identity disorder, which typically impair identity at levels involving autobiographical memory, self-narratives, and personality. ‘The person affected with depersonalization complains spontaneously that his or her mental activity, body, and surroundings are changed in their quality, so as to be unreal, remote, or automatized. Among the varied phenomena of the syndrome, patients complain most frequently of loss of emotions and feelings of estrangement or detachment from their thinking, their body, or the real world. In spite of the dramatic nature of the experience, the patient is aware of the unreality of the change. The sensorium is normal and the capacity for emotional expression intact’ (World Health Organization, 1992). Although ‘feelings of unreality’ is still commonly used as a short-hand to describe the phenomenon in clinical practice, most patients stress the ineffable nature of the experience and make use of metaphors which usually take two forms. A first kind makes reference to a sense of being cut-off, alienated from oneself and surroundings. For example, patients would often talk about ‘being in a bubble’, or being ‘separated from the world by an invisible barrier such as a pane of glass, a fog, or a veil’ ( Sierra, 2009). A second group of metaphors emphasise instead a qualitative change in the state of consciousness, and the feeling as if in ‘a dream’…‘stoned’, ‘not awake’ or an indescribable ‘muzzy feeling’, etc. This ineffable aspect of depersonalization sets it apart from other ‘neurotic’ conditions such as ‘hypochondriasis’, or ‘conversion disorders’, where vivid, detailed and often dramatic descriptions are commonplace.