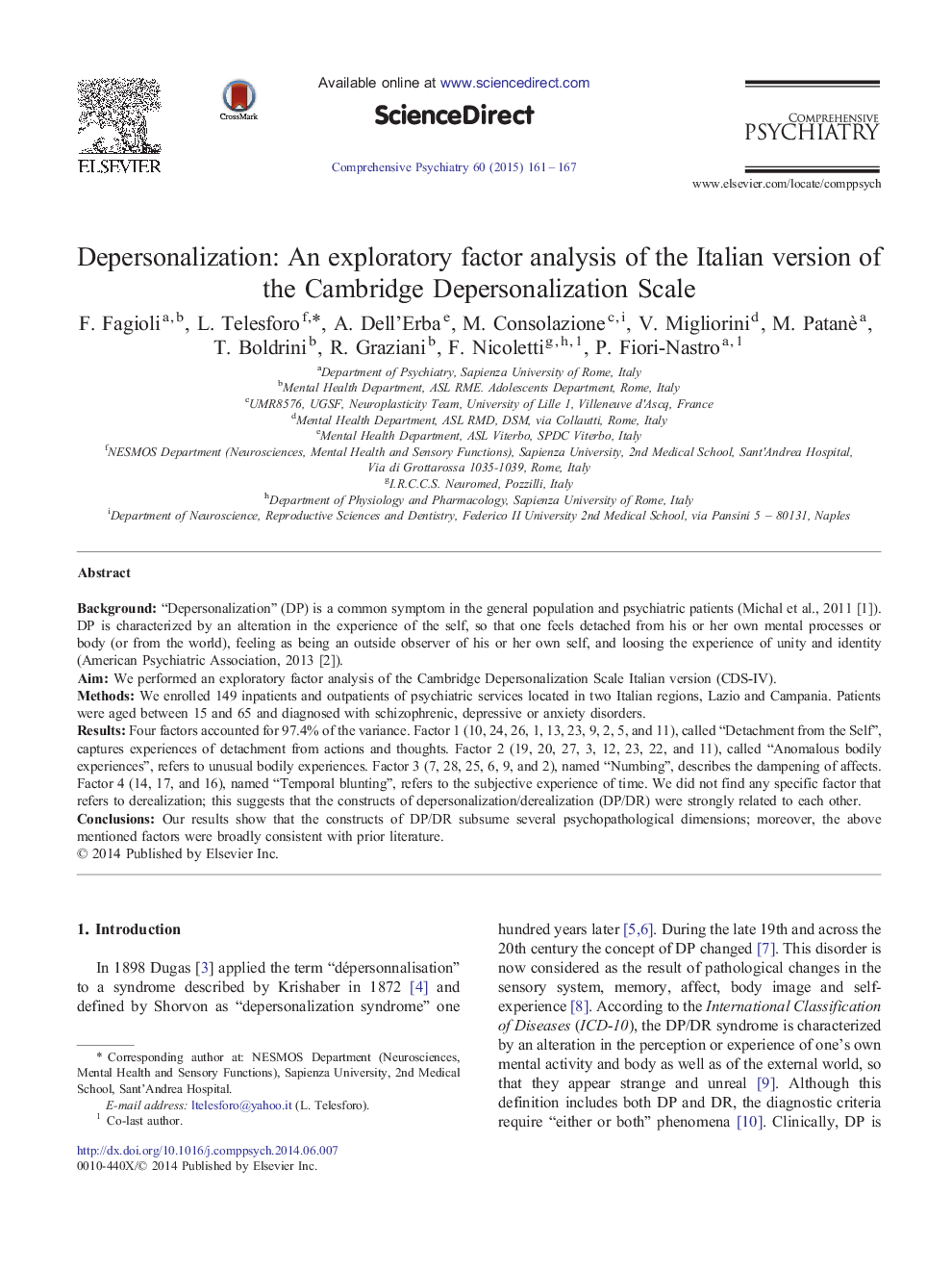 Background “Depersonalization” (DP) is a common symptom in the general population and psychiatric patients (Michal et al., 2011 [1]). DP is characterized by an alteration in the experience of the self, so that one feels detached from his or her own mental processes or body (or from the world), feeling as being an outside observer of his or her own self, and loosing the experience of unity and identity (American Psychiatric Association, 2013 [2]). Aim We performed an exploratory factor analysis of the Cambridge Depersonalization Scale Italian version (CDS-IV). Methods We enrolled 149 inpatients and outpatients of psychiatric services located in two Italian regions, Lazio and Campania. Patients were aged between 15 and 65 and diagnosed with schizophrenic, depressive or anxiety disorders.

In 1898 Dugas [3] applied the term “dépersonnalisation” to a syndrome described by Krishaber in 1872 [4] and defined by Shorvon as “depersonalization syndrome” one hundred years later [5] and [6]. During the late 19th and across the 20th century the concept of DP changed [7]. This disorder is now considered as the result of pathological changes in the sensory system, memory, affect, body image and self-experience [8]. According to the International Classification of Diseases (ICD-10), the DP/DR syndrome is characterized by an alteration in the perception or experience of one's own mental activity and body as well as of the external world, so that they appear strange and unreal [9]. Although this definition includes both DP and DR, the diagnostic criteria require “either or both” phenomena [10]. Clinically, DP is characterized by persistent or recurrent episodes of detachment or estrangement from one's self. Symptoms often include a dream-like state, loss of empathy, and an altered perception of physical self. A greatly reduced emotional response, or “de-affectualization,” is frequently described [10]. In the DSM-5, the definition of the DP/DR disorder is in line with the definition of ICD-10, whereas in the DSM-IV-TR DP and DR were separated into two distinct categories [11]. DP (criterion A1) is defined as an experience of unreality or detachment, in which one is an outside observer of his or her thoughts, feelings, sensations, body, or actions. The individual may feel perceptual alterations, distorted sense of time, unreal or absent self, and emotional and/or physical numbing. DR (criterion A2) is defined as an experience of unreality or detachment with respect to surroundings in which individuals or objects may be experienced as unreal, dreamlike, foggy, life­less, or visually distorted. According to the DSM-5 “there is no evidence of any distinction between individuals with predominantly depersonalization versus derealization symptoms.” Of note, in the DSM-5, the presence of a single criterion is sufficient for the diagnosis of the DP/DR disorder [2]. DP/DR may represent a pathological symptom, a nonspecific signal of stress, or an adaptative response. It may be difficult to discriminate among the above three forms and to evaluate possible transitions of one condition into another [12]. As a pathological symptom, DP may be easily identifiable or may represent a sub-threshold, non specific and variable symptom of other psychiatric disorders [13]. Manifestations of DP occur as a continuum, spanning from transient episodes to a significant symptom-complex in the context of other psychiatric illnesses [14]. DP appears to have significant comorbidity with anxiety and depression [15], [16] and [17]; Parnas and Handest consider DP as a disorder of self experience that may be present in the prodromal phases of schizophrenia and other psychotic disorders [18]. A recent study has shown that DP is common in the general population and psychiatric patients, contributes independently to the mental and somatic health status beyond anxiety and depression, and may be clearly differentiated from anxiety and depression [19]. DP also occurs in some neurological diseases such as epilepsy or migraine [13] and [20], and has been associated with autonomic blunting and dysregulation of the hypothalamic–pituitary–adrenal (HPA) axis [16] and [21]. Current epidemiological data show a prevalence of DP/DR in the general population of approximately 0.8–2% [22], [23] and [24]; this prevalence is similar to those found in common mental disorders, such as the bipolar disorder and obsessive–compulsive disorder [25]. The first systematic review reports that the prevalence of transient DP/DR in the general population ranges between 26 and 74% and between 31 and 66% when traumatic events occur [22]. The prevalence is higher in psychiatric patients, increasing with the severity of co-morbid conditions. Despite the high prevalence, DP is under-detected and under-diagnosed [1], [10], [14], [16] and [25]. Self-rating scales are used to estimate DP, such as the Dixon Depersonalization Scale (DDS) [26], the Jacob's and Bovasso's Depersonalization Scale (JBS) [27], and the Dissociative Experience Scale (DES) [28] and [29]. However, these instruments have only a few items detecting DP (self, bodily and allopsychic DP). Sierra and Berrios developed a new scale based on a comprehensive study of the DP phenomenology: the Cambridge Depersonalization Scale (CDS) [30]. The CDS was designed to measure the intensity and frequency of DP within the previous 6 months. The CDS is a self-administrated questionnaire composed by 29 items measuring DP symptoms. Each item is rated on two Likert scales, one for the frequency and the other for the duration of experience. The CDS showed high internal consistency and good reliability. Fewtrell developed a questionnaire assessing all the aspects of DP: the Fewtrell Depersonalization Scale (FDS) [31]. The FDS has been used for measurements of primary and secondary DP derived from the Present State Examination for the evaluation of the relationship between DP and anxiety and depression [13]. An ultra-brief two-item scale was developed from the CDS: the two-item version of the Cambridge Depersonalization Scale (CDS-2) [24]. To assess whether the DP construct has several underlying dimensions, a first factor analysis, performed on 138 patients, highlighted four factors that account for 73.3% of the variance: anomalous body experience, emotional numbing, anomalous subjective recall, and alienation from surroundings [32]. Simeon et al. [33] carried out an exploratory factor analysis on 394 patients that extracted five factors accounting for 55.8% of the variance: numbing, unreality of self, perceptual alterations, unreality of surroundings and temporal disintegration. The five-factor model was similar to the four-factor model, with the exception that “anomalous body experience” was separated into two factors: “unreality of self” and “perceptual alterations”. In 2012, we translated and validated a cross-cultural Italian adaptation of the CDS, the CDS Italian Version (CDS-IV) [34]. CDS-IV has good psychometric properties and a cut-off of 59. The aim of the present study was to examine the factorial structure of CDS-IV as compared to previous models.