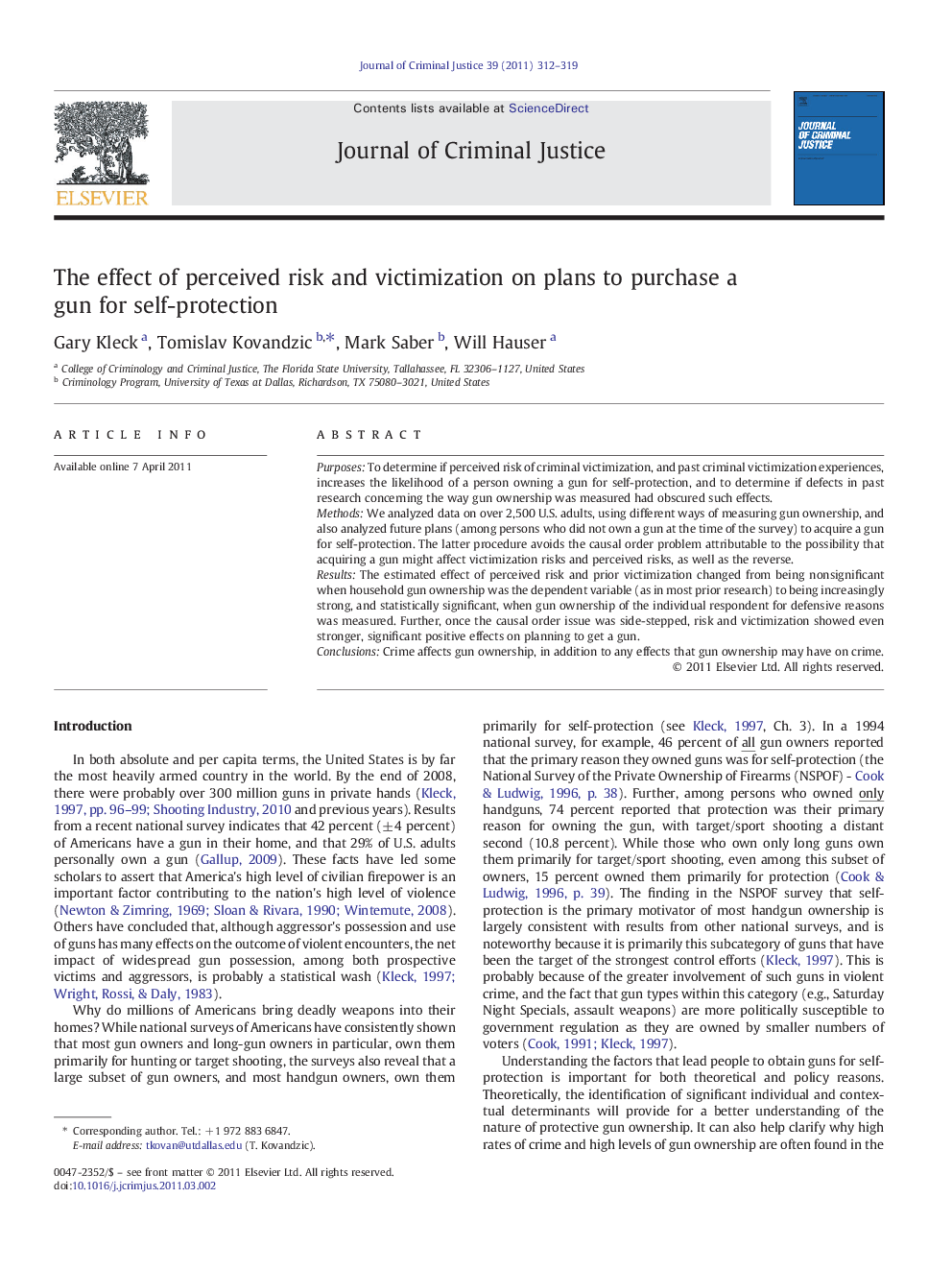 Abstract Purposes To determine if perceived risk of criminal victimization, and past criminal victimization experiences, increases the likelihood of a person owning a gun for self-protection, and to determine if defects in past research concerning the way gun ownership was measured had obscured such effects. Methods We analyzed data on over 2,500 U.S. adults, using different ways of measuring gun ownership, and also analyzed future plans (among persons who did not own a gun at the time of the survey) to acquire a gun for self-protection. The latter procedure avoids the causal order problem attributable to the possibility that acquiring a gun might affect victimization risks and perceived risks, as well as the reverse. Results The estimated effect of perceived risk and prior victimization changed from being nonsignificant when household gun ownership was the dependent variable (as in most prior research) to being increasingly strong, and statistically significant, when gun ownership of the individual respondent for defensive reasons was measured. Further, once the causal order issue was side-stepped, risk and victimization showed even stronger, significant positive effects on planning to get a gun. Conclusions Crime affects gun ownership, in addition to any effects that gun ownership may have on crime.

Conclusions Once measurement and causal order problems are reduced, the evidence indicates that perceived risk of criminal victimization increases the probability of getting a gun for self-protection. Actual robbery victimization in the recent past also appears to increase the likelihood of doing so, though the results are not supportive of an effect of burglary victimization. The implication of these individual-level findings for macro-level research is that positive associations between crime rates and gun ownership levels may reflect the effect of the crime rates on gun ownership, rather than (or in addition to) the other way around. Thus, methods suitable for modeling possible two-way relationships, such as instrumental variables methods, are called for in macro-level research on this topic. Most macro-level studies of the topic do not adopt such methods, either effectively ignoring the issue, or using ineffective methods such as relating lagged gun ownership to current crime rates. One policy implication of these findings is that dissuading people from acquiring or retaining guns may be difficult, to the extent that gun (especially handgun) acquisition and ownership is motivated by perceived risk of crime. Perceived risk can be a powerful motivator of behavior, and is probably a stronger motivator than the pleasure derived from sporting uses of firearms such as target shooting and hunting. These conclusions are subject to some limitations. First, we do not know how many of who stated that they planned to get a gun for self-protection actually did so, and understand that the two are not the same. Thus, the use of this variable introduces some unknown degree of measurement error as the unavoidable price of this strategy for reducing causal order problems. Second, there are other interpretations possible regarding the fact that risk/gun associations got stronger when the dependent variable was planning to get a gun. This not only reduces causal order problems (because such plans are unlikely to reduce perceptions of risk or victimization), but could also reduce social desirability and other response error problems. Rs who are reluctant to report actual current gun ownership for various reasons (they are not sure their ownership is lawful, they think the information might reach government authorities intent on taking their guns away, they fear the caller might be a burglar, etc.), may be more willing to report merely planning to get a gun. Finally, although our data were drawn from a survey fielded in 1994, and levels of perceived risk and victimization have changed since then, we know of no reason to believe that the relationship between these variables and gun ownership or planning to get a gun has changed in the interim. Future research could benefit from a panel design in which the same set of individuals are interviewed on two or more occasions, allowing researchers to test whether changes in levels of fear or perceived risk, or victimization experiences, are associated with changes in personal gun ownership status. This would also help address causal order problems, but without the limitations of analyzing plans to get a gun.