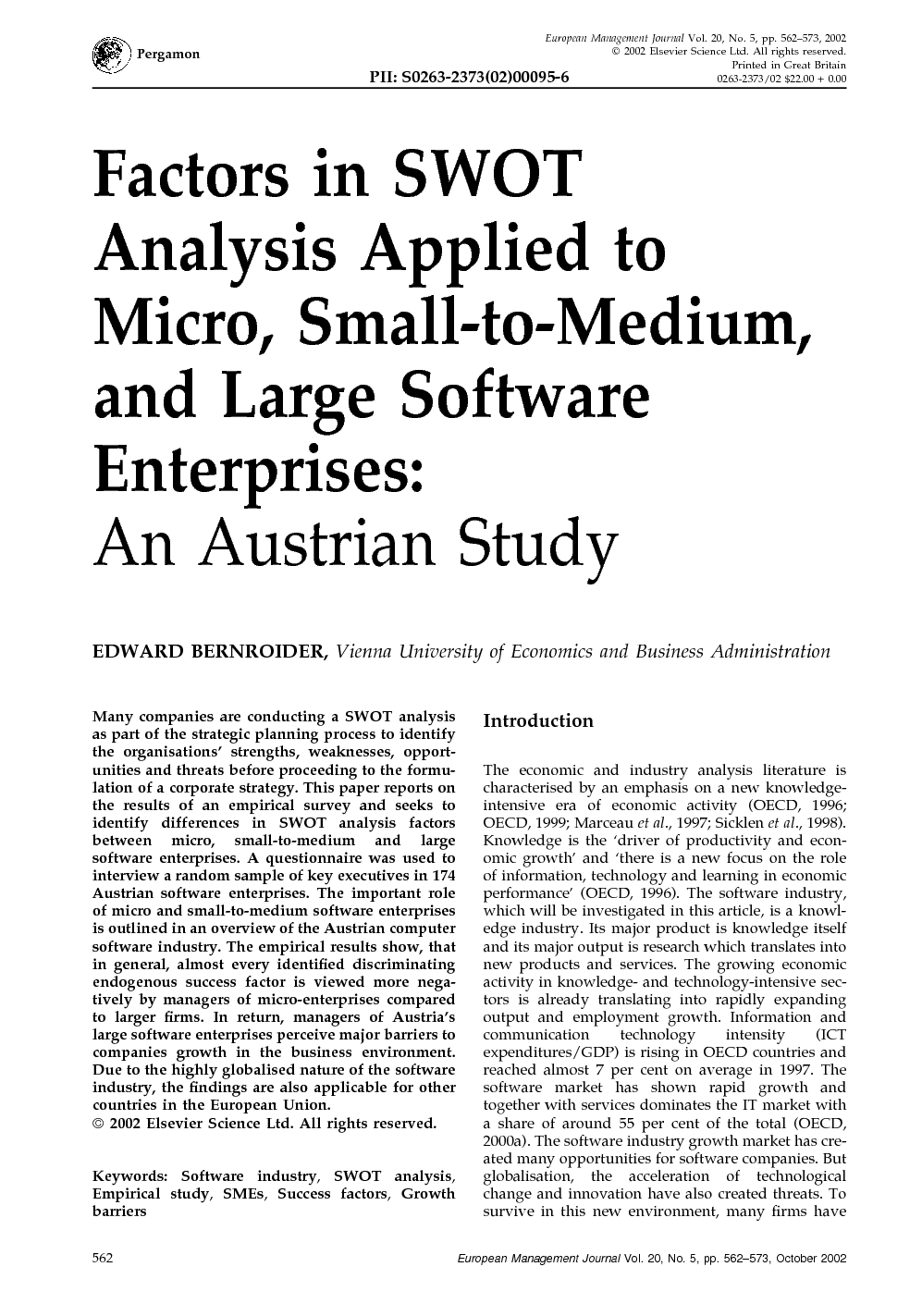 Many companies are conducting a SWOT analysis as part of the strategic planning process to identify the organisations’ strengths, weaknesses, opportunities and threats before proceeding to the formulation of a corporate strategy. This paper reports on the results of an empirical survey and seeks to identify differences in SWOT analysis factors between micro, small-to-medium and large software enterprises. A questionnaire was used to interview a random sample of key executives in 174 Austrian software enterprises. The important role of micro and small-to-medium software enterprises is outlined in an overview of the Austrian computer software industry. The empirical results show, that in general, almost every identified discriminating endogenous success factor is viewed more negatively by managers of micro-enterprises compared to larger firms. In return, managers of Austria’s large software enterprises perceive major barriers to companies growth in the business environment. Due to the highly globalised nature of the software industry, the findings are also applicable for other countries in the European Union.

The economic and industry analysis literature is characterised by an emphasis on a new knowledge-intensive era of economic activity (OECD, 1996, OECD, 1999, Marceau et al., 1997 and Sicklen et al., 1998). Knowledge is the ‘driver of productivity and economic growth’ and ‘there is a new focus on the role of information, technology and learning in economic performance’ (OECD, 1996). The software industry, which will be investigated in this article, is a knowledge industry. Its major product is knowledge itself and its major output is research which translates into new products and services. The growing economic activity in knowledge- and technology-intensive sectors is already translating into rapidly expanding output and employment growth. Information and communication technology intensity (ICT expenditures/GDP) is rising in OECD countries and reached almost 7 per cent on average in 1997. The software market has shown rapid growth and together with services dominates the IT market with a share of around 55 per cent of the total (OECD, 2000a). The software industry growth market has created many opportunities for software companies. But globalisation, the acceleration of technological change and innovation have also created threats. To survive in this new environment, many firms have had to become more responsive to change. One reason for the success of smaller businesses is their ability to adapt rapidly to new circumstances (Vickery, 1999), which is the foundation of continued competitiveness in the dynamic environment of IT companies. A key characteristic of the IT industry in general is its fast clockspeed, fast innovation and short life cycles (Fine, 1998, Mendelson and Pillai, 1998 and Mendelson and Pillai, 1999). Scholars in economic sciences have focused on the role of SMEs in economic development, especially on the contribution of SMEs to total innovation output (Acs and Audretsch, 1991, Acs and Audretsch, 1988, Foster, 1986, Keeble, 1996, Isaksen and Smith, 1997, Pavitt et al., 1987, Sandven. 1996 and Scherer, 1984). In OECD countries over 95 per cent of enterprises are SMEs. They account for 60–70 per cent of jobs in most countries. In the European Union, SMEs provide employment relating to two-thirds of all EU jobs. In Japan, 78 per cent of jobs are provided by such firms. Common to all countries is the vital role in job creation played by SMEs (OECD, 2000b). The increasing importance of SMEs in economic growth, job creation, regional and local development is also recognised by government committees (Bologna Charter, 2000). The software industry has received surprisingly little attention, given the size of the industry, its rapid growth and apparent importance. The aim of this article is firstly to give an overview of the Austrian software industry with a special view to the role of different sized software enterprises. Secondly, to investigate differences in SWOT analysis factors; respective strengths, weaknesses, opportunities and threats between three different types of enterprises: Micro (ME), small-to-medium (SME) and large organisations (LE). Due to the highly globalised nature of the software industry the findings can also be very informative for other countries in the European Union.

The internal capability to internationalise improves, not surprisingly, with the size of the organisation and constitutes the most differentiating endogenous factor concerning the size of the company. Also the perceived opportunities of potential exogenous growth drivers regarding market size/expansion increased with the size of the organisation, i.e. for MEs the external factors ‘EU domestic market’, the ‘break-up of the former eastern bloc’ and the ‘EU east expansion’ have a low effect on business success. These deficiencies of smaller organisations (together with other subjects related to at a later point) also show up in a framework proposed by (Marceau et al., 1997) consisting of a set of ‘complementary assets’, which need to be considered for small and very small organisations to comply with their special threats. Marceau’s framework implies that marketing and distribution skills and mechanisms for products are usually weaknesses in smaller organisations, which especially applies to Austrian software MEs. The financial resources are regarded as a major weakness for MEs. The internal ability to attract capital, especially venture capital, decreases with the size of the organisation. This proposition is further strengthened by the multivariate statistical analysis applied, which showed that the factor ‘equity capital situation’ (together with ‘internationalisation’) differs most between company sizes. Small organisations usually do not have the opportunity to use sophisticated types of finance techniques because they either don’t have access to the required expertise or because the type of enterprise prevents or exacerbates ways to provide capital such as the acquisition of and participation in companies by venture capitalists. Also the inability to spread risk over a portfolio of projects can represent large financial risks. In Marceau’s framework this potential weakness is referred to as ‘access to adequate finance’ (Marceau et al., 1997). In general, almost every identified discriminating endogenous success factor is viewed more negatively compared to SMEs and LEs. Only the price levels are judged as constituting a relative strength. While SMEs have the highest price levels, these are lowest in MEs. Maybe to compensate for trust handicaps compared with larger organisations. Small software companies often have problems signalling the future capability to maintain and service the supplied product.