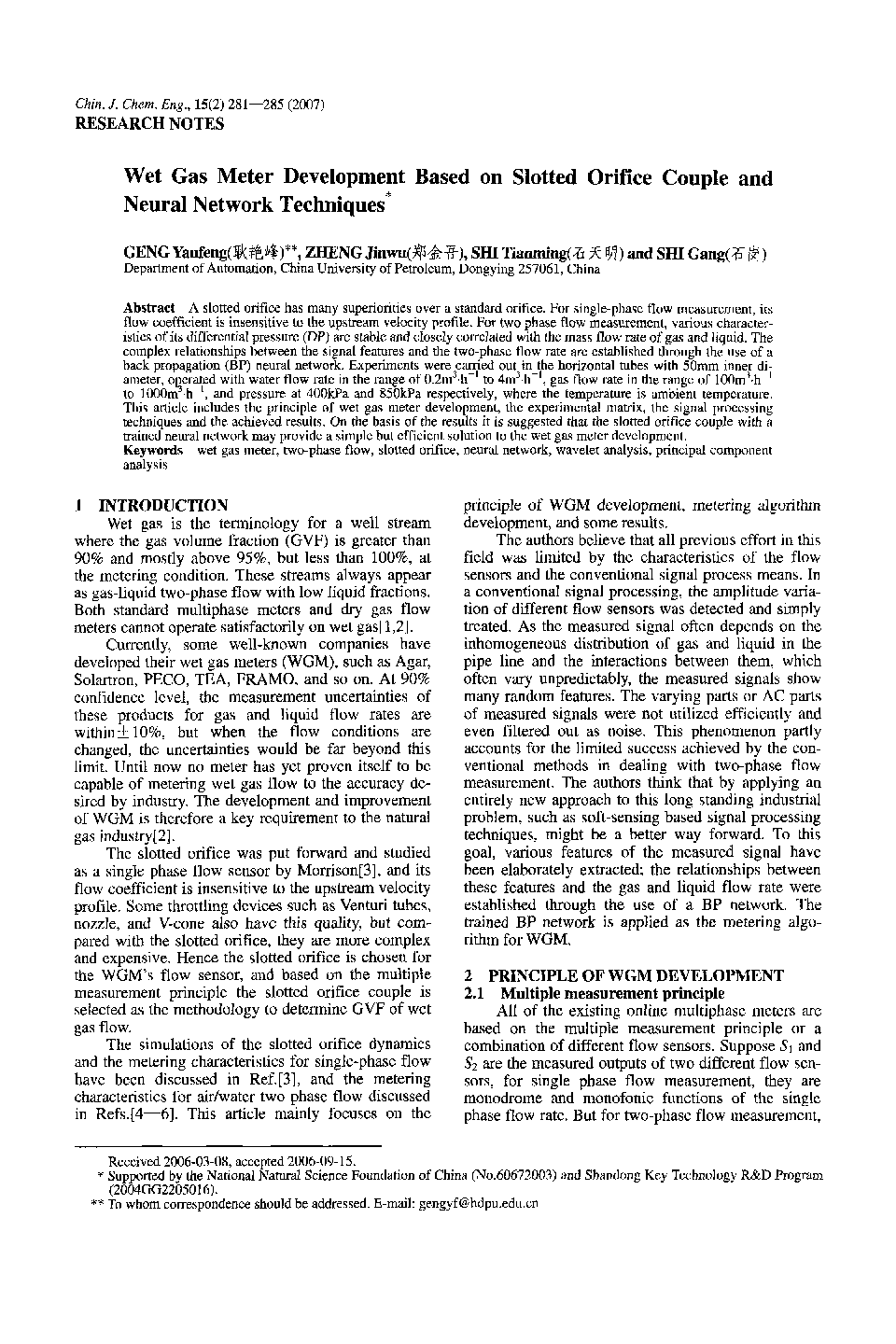 A slotted orifice has many superiorities over a standard orifice. For single-phase flow measurement, its flow coefficient is insensitive to the upstream velocity profile. For two phase flow measurement, various characteristics of its differential pressure (DP) are stable and closely correlated with the mass flow rate of gas and liquid. The complex relationships between the signal features and the two-phase flow rate are established through the use of a back propagation (BP) neural network. Experiments were carried out in the horizontal tubes with 50mm inner diameter, operated with water flow rate in the range of 0.2m3.h-1 to 4m3.h-1, gas flow rate in the range of 100m3.h-1 to 1000m3.h-1, and pressure at 400kPa and 850kPa respectively, where the temperature is ambient temperature. This article includes the principle of wet gas meter development, the experimental matrix, the signal processing techniques and the achieved results. On the basis of the results it is suggested that the slotted orifice couple with a trained neural network may provide a simple but efficient solution to the wet gas meter development.

Wet gas is the terminology for a well stream where the gas volume fraction (GVF) is greater than 90% and mostly above 95%, but less than loo%, at the metering condition. These streams always appear as gas-liquid two-phase fl ow with low liquid fractions. Both standard multiphase meters and dry gas flow meters cannot operate satisfactorily on wet gas[ 1,2]. Currently, some well-known companies have developed their wet gas meters (WGM), such as Agar, Solartron, PECO, TEA, FRAMO, and so on. At 90% confidence level, the measurement uncertainties of these products for gas and liquid flow rates are within*10%, but when the flow conditions are changed, the uncertainties would be far beyond this limit. Until now no meter has yet proven itself to be capable of metering wet gas flow to the accuracy desired by industry. The development and improvement of WGM is therefore a key requirement to the natural gas industry[2]. The slotted orifice was put forward and studied as a single phase flow sensor by Momson[3], and its flow coefficient is insensitive to the upstream velocity profile. Some throttling devices such as Venturi tubes, nozzle, and V-cone also have this quality, but compared with the slotted orifice, they are more complex and expensive. Hence the slotted orifice is chosen for the WGM's flow sensor, and based on the multiple measurement principle the slotted orifice couple is selected as the methodology to determine GVF of wet gas flow. The simulations of the slotted orifice dynamics and the metering characteristics for single-phase flow have been discussed in Ref.[3], and the metering characteristics for aidwater two phase flow discussed in Refs.[4-61. This article mainly focuses on theprinciple of WGM development, metering algorithm development, and some results. The authors believe that all previous effort in ths field was limited by the characteristics of the flow sensors and the conventional signal process means. In a conventional signal processing, the amplitude variation of different flow sensors was detected and simply treated. As the measured signal often depends on the inhomogeneous distribution of gas and liquid in the pipe line and the interactions between them, which often vary unpredictably, the measured signals show many random features. The varying parts or AC parts of measured signals were not utilized efficiently and even filtered out as noise. This phenomenon partly accounts for the limited success achieved by the conventional methods in dealing with two-phase flow measurement. The authors think that by applying an entirely new approach to this long standing industrial problem, such as soft-sensing based signal processing techniques, might be a better way forward. To this goal, various features of the measured signal have been elaborately extracted; the relationships between these features and the gas and liquid flow rate were established through the use of a BP network. The trained BP network is applied as the metering algorithm for WGM.

A three-layer BP network can be used to represent any nonlinear functions. In this article the BP network consists of the log-sigmoid neurons in the hidden layer, two linear neurons in the output layer, and nine input neurons. The Levenberg-Marquardt learning method is selected. During the training of the neural network, it was found that seven neurons in the hidden layer were adequate. To record the dynamic properties of two-phase flow and analyze the sampled data offline, both the DP transducer and pressure transducer are piezoelectric ones; the frequency response is over IkHz. During the time period for each step of gas and liquid flow rate, four signal sequences are recorded. The sample length and sampling rate are eight minutes and lkHz, respectively. By comparing the Fast Fourier Transform results of sampled data, it is found that more than 98% energy of the four signals is below 50Hz. Beyond this frequency, the reconstruction results of measured signals through wavelet transform get weaker and weaker, and the calculated auto correlation coefficient dies out quickly as the frequency increases. The chosen of 42Hz as the upper limit of FIR is based on this fact and also the consideration of eliminating the influence of the main frequency, which is 50Hz in China. Dividing the experiment data randomly into twogroups, the first group, the training group, consists of 80% of the measured signals, and the second group, the test group, consists of the remaining 20%. Once properly trained, the neural network is evaluated using the test group data. Fig.5 shows a typical test result of Qg. X-axis is the real Qg and y-axis is the predictedvalue from the trained BP network. It shows that the outputs of the neural network follow the variations of the expected gas mass flow rate. With an error withink 10% indicated by the two lines shown on the same figure. The calculation in this study shows that at 90% confidence level the relative error is within+6% for Qg and &9% for QL. The accuracy of neural network prediction can meet the industry demands for production based metering. In short, based on the multiple measurement principle, a new WGM has been designed. It mainly consists of a slotted orifice couple, and a PC-based data acquisition and processing system. On the basis of the neural network techniques, a novel approach to wet gas flow metering has been studied. The inputs of neural network came from the four measured signals subsequently processed by FIR filter, feature extraction, and PCA. The signal processing results suggest that this approach may provide a cost effective solution to WGM development. There are still some aspects which deserve further investigations, such as how to measure the efficiency of different features, how to expand the gas and liquid measuring range, and so on. A new architecture of wet gas metering algorithm is under development, which consists of two layers of neural networks. The first layer is used to identify the flow regime of wet gas, and the second layer is used to measure flow rate according to different results of the first layer. This new idea is more like the thought of subparagraph linear, whch may lead to more practical results and success.