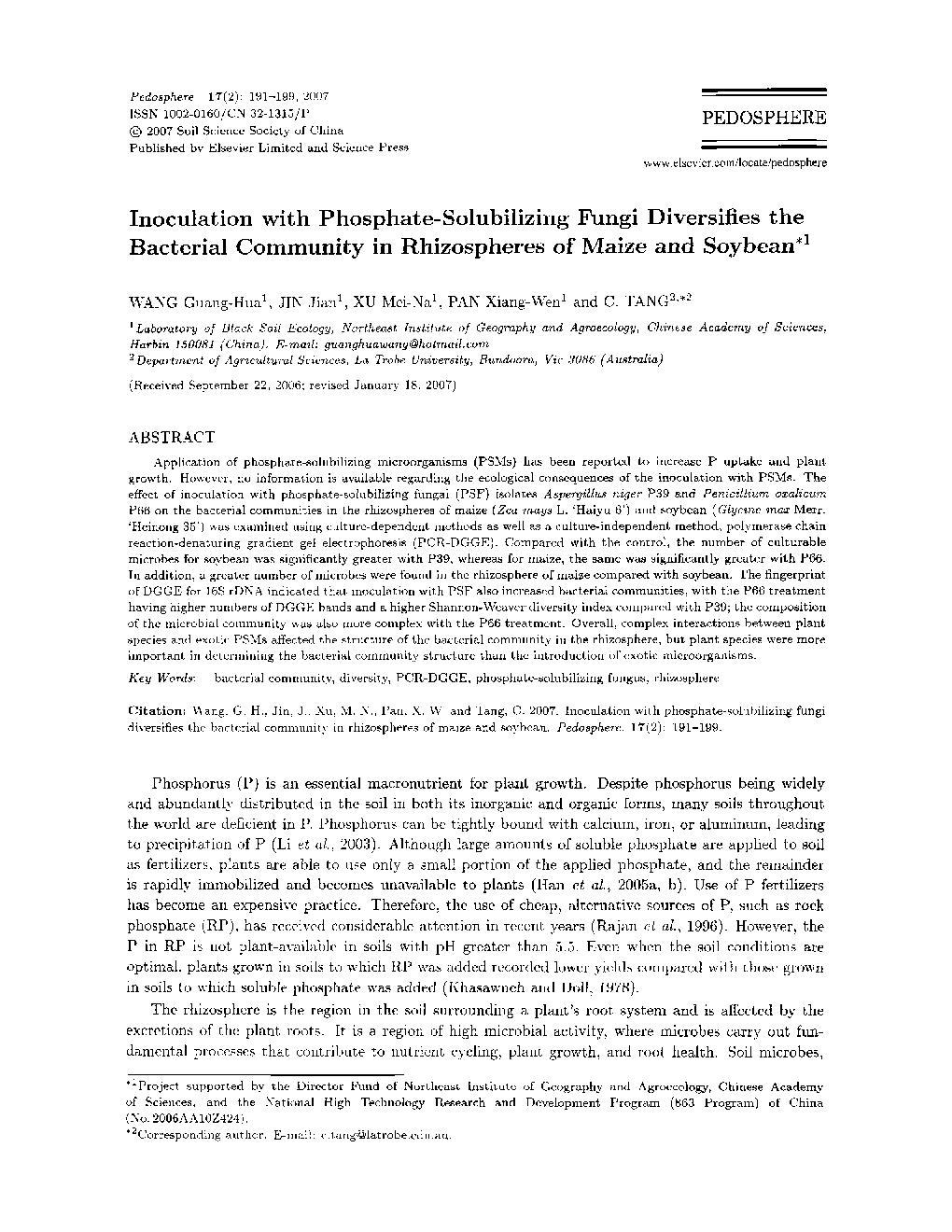 Application of phosphate-solubilizing microorganisms (PSMs) has been reported to increase P uptake and plant growth. However, no information is available regarding the ecological consequences of the inoculation with PSMs. The effect of inoculation with phosphate-solubilizing fungal (PSF) isolates Aspergillus niger P39 and Penicillium oxalicum P66 on the bacterial communities in the rhizospheres of maize (Zea mays L. ‘Haiyu 6’) and soybean (Glycine max Merr. ‘Heinong 35’) was examined using culture-dependent methods as well as a culture-independent method, polymerase chain reaction-denaturing gradient gel electrophoresis (PCR-DGGE). Compared with the control, the number of culturable microbes for soybean was significantly greater with P39, whereas for maize, the same was significantly greater with P66. In addition, a greater number of microbes were found in the rhizosphere of maize compared with soybean. The fingerprint of DGGE for 16S rDNA indicated that inoculation with PSF also increased bacterial communities, with the P66 treatment having higher numbers of DGGE bands and a higher Shannon-Weaver diversity index compared with P39; the composition of the microbial community was also more complex with the P66 treatment. Overall, complex interactions between plant species and exotic PSMs affected the structure of the bacterial community in the rhizosphere, but plant species were more important in determining the bacterial community structure than the introduction of exotic microorganisms.

Phosphorus (P) is an essential macronutrient for plant growth. Despite phosphorus being widely and abundantly distributed in the soil in both its inorganic and organic forms, many soils throughout the world are deficient in P. Phosphorus can be tightly bound with calcium, iron, or aluminum, leading to precipitation of P (Li et al., 2003). Although large amounts of soluble phosphate are applied to soil as fertilizers, plants are able to use only a small portion of the applied phosphate, and the remainder is rapidly immobilized and becomes unavailable to plants (Han et al., 2005a, b). Use of P fertilizers has become an expensive practice. Therefore, the use of cheap, alternative sources of P, such as rock phosphate (RP). has received considerable attention in recent years (Rajan et al., 1996). However, the P in RP is not plant-available in soils with pH greater than 5.5. Even when the soil conditions are optimal. plants grown in soils to which RP was added recorcled lower yields coiripared with tliose grown in soils to which soluble p1ioaphat.e was added (Iihasawneh and Doll, 1978). The rhizosphere is the region in the soil surrounding a plant's root system and is affected by the excretions of the plant roots. It is a region of high microbial activity, where microbes carry out fundamental processes that contribute to nut,rient cycling, plant growth, and root. health. Soil microbes,especially those isolated from t,he rhizosphere, are capable of solubilizing inorganic phosphate materials (Kucey et al.. 1989). In pot, experiments and field trials, the inoculation with phosphate-solubilizing microorganisms (PSSls) in the soil. seed, or seedlings has increased P upt,ake and total plant biomass (Chabot et al.. 1996). However. the effect, of PSMs on microbial communities in the rhizosphere is not known. Traditional techniques that are used to elucidak the soil microbial community are based on cultivation methods. However. cult,ure-depeIideIit. techniques cannot detect more than 90% of the microorganisms existing in nature (Il'ard ei al.. 1990). Therefore: culture-independent methods, such as PLFA ( phospholipid fatty acids analysis j (Zelles, 1999) and polymerase chain reaction (PCRj-denaturing gradient gel electrophoresis (DGGE) (Muyzer et al., 1993; Teng et aZ.: 2004), are increasingly being used for the analysis of microbial communities. Therefore, the objective of this st,udy was to investigate the effects of inoculation with phosphat,e-solubilizing fungal (PSF) isolates on bacterial and fungal nurnbers in the rhizuspheres of maize arid soybean using the plate counting method and on the bacterial community using the PCR-DGGE method.