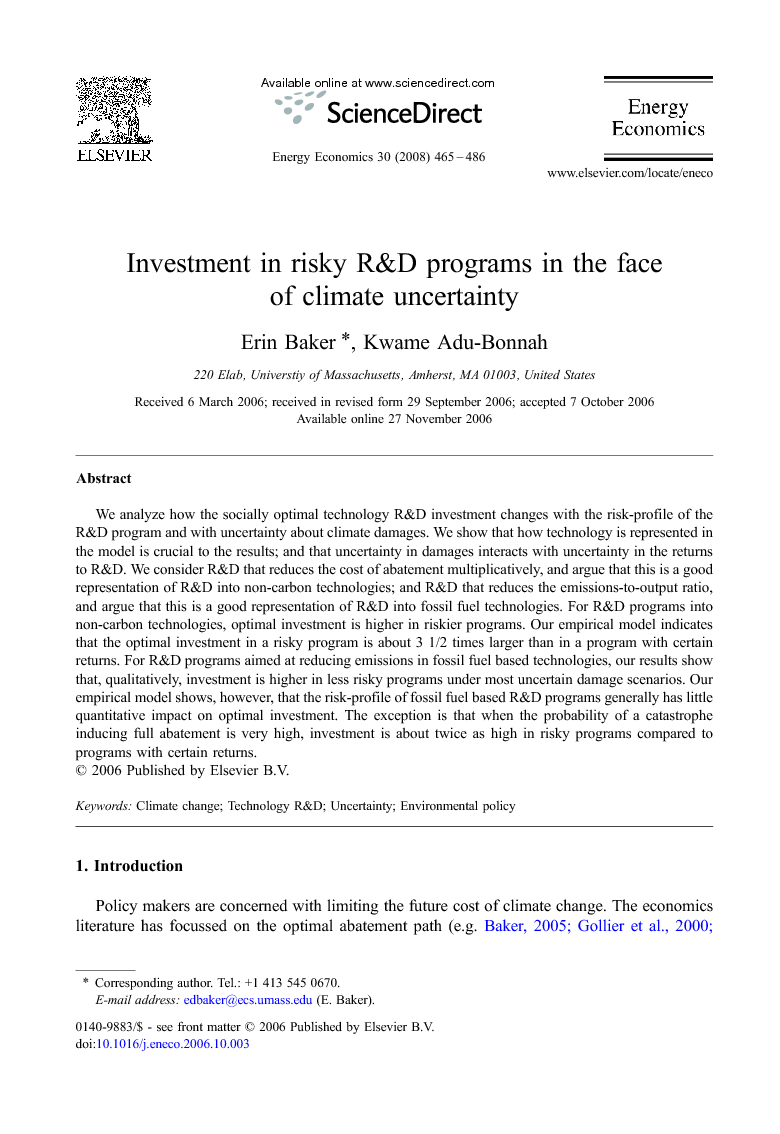 We analyze how the socially optimal technology R&D investment changes with the risk-profile of the R&D program and with uncertainty about climate damages. We show that how technology is represented in the model is crucial to the results; and that uncertainty in damages interacts with uncertainty in the returns to R&D. We consider R&D that reduces the cost of abatement multiplicatively, and argue that this is a good representation of R&D into non-carbon technologies; and R&D that reduces the emissions-to-output ratio, and argue that this is a good representation of R&D into fossil fuel technologies. For R&D programs into non-carbon technologies, optimal investment is higher in riskier programs. Our empirical model indicates that the optimal investment in a risky program is about 3 1/2 times larger than in a program with certain returns. For R&D programs aimed at reducing emissions in fossil fuel based technologies, our results show that, qualitatively, investment is higher in less risky programs under most uncertain damage scenarios. Our empirical model shows, however, that the risk-profile of fossil fuel based R&D programs generally has little quantitative impact on optimal investment. The exception is that when the probability of a catastrophe inducing full abatement is very high, investment is about twice as high in risky programs compared to programs with certain returns.

In this paper we set up a simple model with two contrasting assumptions about technical change. In the first case, we assume that investments in R&D will lead to a proportionate reduction in abatement costs, and we argue that these represent investments into alternative, non-carbon energy programs. We find that optimal investment is higher in risky R&D than in non-risky, except when there is a large chance of a catastrophe occurring. This is because these investments only have a significant payoff if something dramatic happens: either if technical change is large OR climate damages are severe. Alternative technologies are only found in niche markets right now: incremental improvements will incrementally increase the niches, but not have a huge impact on the economy. This means that, if damages are moderate, the only thing that will have a big impact is a breakthrough in the technology which will allow it to be widely competitive. Therefore, pursuing risky R&D (with a chance of a breakthrough as well as a chance of failure) makes sense. However, if damages are severe, society will use a much larger proportion of alternative, non-carbon technologies. In that case any improvements in these technologies will reverberate through society. When incremental improvements have a big impact risks are less worth taking. In the second case, we assume that investment in R&D will reduce the emissions-to-output ratio, and we argue this represents investments into reducing the emissions from fossil fuel technologies. Here, we get opposite results from those above: optimal investment is, quantitatively, largely independent of risk, and, qualitatively, higher in non-risky R&D than risky, except when the probability of a catastrophe is high. This case is different because R&D into fossil fuel technologies have a significant impact when damages are moderate, but little impact when damages are high. Since fossil fuel use is widespread, incremental improvements will have a widespread effect on the economy and a significant payoff, which make risk less worth taking. But, in the event of really serious damages, society will reduce the use of fossil fuel technologies, making incremental improvements in fossil fuel technologies much less important. In this case, the only thing that will help is a breakthrough (reducing emissions from fossil fuels to near zero), therefore risky R&D is worth pursuing. The bottom line is that the optimal investment in R&D depends crucially on the type of technology considered and the uncertainty in both damages and the R&D process. The policy implications of these results depend on beliefs about the chance of a catastrophe. In general, one justification for technology policy is the assumption that private actors tend to avoid high risk projects with far-future payoff dates (Clarke and Weyant, 2002). If the probability of a catastrophe is low (i.e. closer to the economists' view of the world in Nordhaus (1994)), an R&D portfolio aimed at reducing the costs of alternative technologies should optimally be tilted toward riskier projects. This means there may be a role for government involvement in R&D into low probability, game-changing alternative technologies — technologies that will be widely competitive with fossil technologies, if successful. On the other hand, if the probability of catastrophe is high, the government may have a role in supporting research aimed at developing a radical, emission-free fossil fuel based technology. This model is a considerable simplification from real-world technology decisions. We have considered two broad categories of technical change, represented by different shifts to the abatement cost curve. We argue that they are broadly related to classes of technologies, but work needs to be done connecting the impacts of specific technical change on the marginal cost of abatement. In fact, the key conclusion of this paper is that it matters how technology is modeled, and so research must start connecting potential real-life R&D projects with their representations in models. We have not considered the history of any particular technology, nor are we commenting on the likelihood of a breakthrough in any particular technology. Rather, we suggest that work needs to be done on assessing the future potential of technologies, whether fossil or non-fossil based. Additionally, we use a simple, two-period model. Thus, this work is not commenting on the option value that is created by considering sequential investments in R&D programs. On the one hand, there is a value to waiting to learn more about climate change damages (which would put a downward pressure on all R&D investments); on the other hand, there is a value to investing a small amount in a risky project in order to learn more about the probability of success (which would put upward pressure on risky technologies). This work is primarily considering the impact of the interaction between uncertainty in damages and uncertainty in R&D. We are looking at the overall optimal level of R&D investment in the economy in response to climate change. We are not considering ancillary benefits or costs from the technical change. The DICE model includes autonomous technical change, both in growth in production, and in a decrease in the emissions-output ratio. Thus, the R&D considered here is additional to the assumed autonomous technical change. Furthermore, the rationale for government technology policy is the gap between the overall optimal investment and what is provided by the private sector. We have begun to address the question of the overall optimal investment; an investigation of private sector investment is an important area of future research. Finally, this work assumes that future decisions will be optimal, implying that a carbon policy is implemented eventually, after more information is revealed. If this is not true and future abatement is inoptimally low, that will tend to favor riskier ARD and less risky CRD; if future abatement is inoptimally high, the result is reversed.