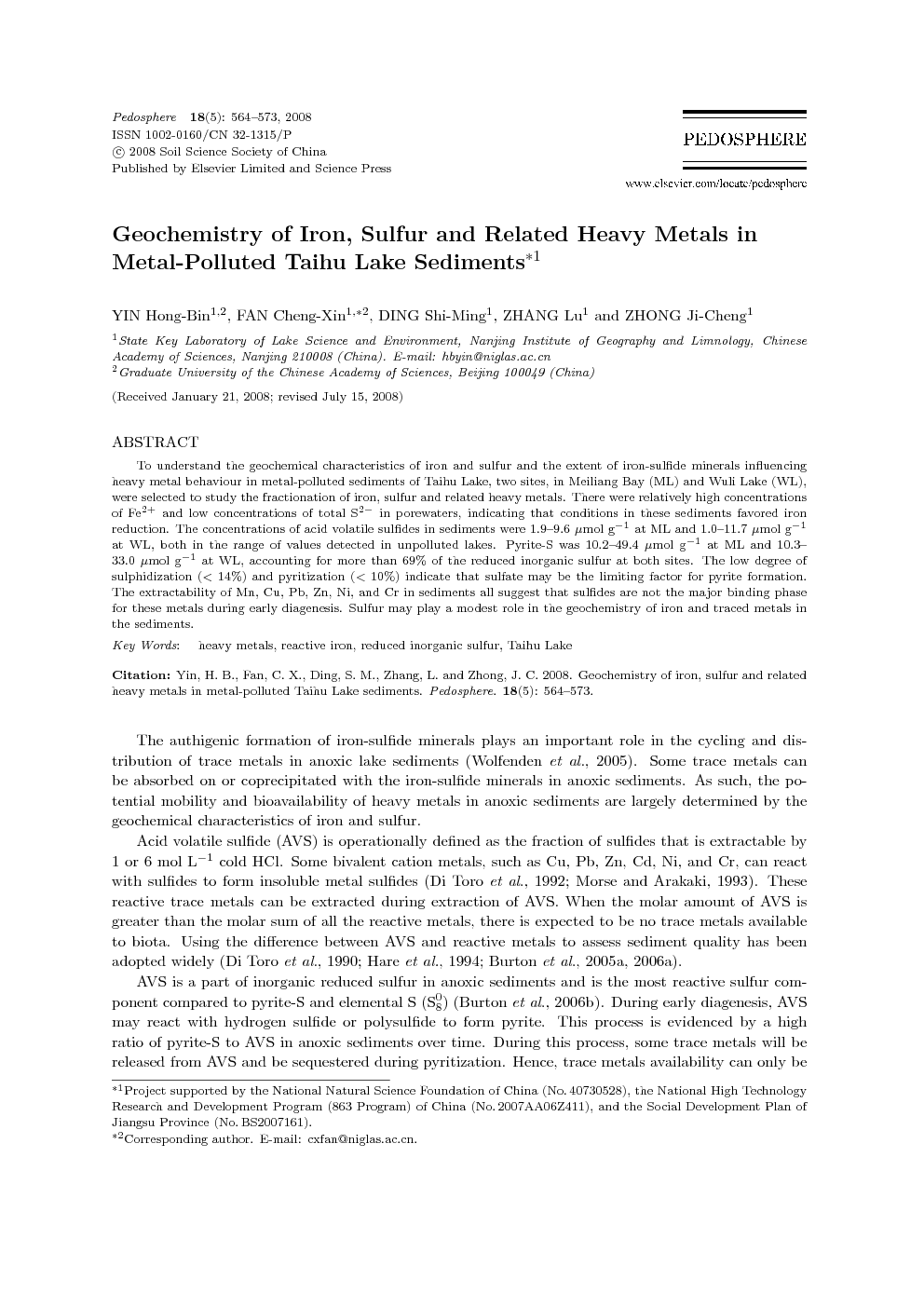 To understand the geochemical characteristics of iron and sulfur and the extent of iron-sulfide minerals influencing heavy metal behaviour in metal-polluted sediments of Taihu Lake, two sites, in Meiliang Bay (ML) and Wuli Lake (WL), were selected to study the fractionation of iron, sulfur and related heavy metals. There were relatively high concentrations of Fe2+ and low concentrations of total S2− in porewaters, indicating that conditions in these sediments favored iron reduction. The concentrations of acid volatile sulfides in sediments were 1.9–9.6 μmol g−1 at ML and 1.0–11.7 μmol g−1 at WL, both in the range of values detected in unpolluted lakes. Pyrite-S was 10.2–49.4 μmol g−1 at ML and 10.3– 33.0 μmol g−1 at WL, accounting for more than 69% of the reduced inorganic sulfur at both sites. The low degree of sulphidization (< 14%) and pyritization (< 10%) indicate that sulfate may be the limiting factor for pyrite formation. The extractability of Mn, Cu, Pb, Zn, Ni, and Cr in sediments all suggest that sulfides are not the major binding phase for these metals during early diagenesis. Sulfur may play a modest role in the geochemistry of iron and traced metals in the sediments.

The authigenic formation of iron-sulfide minerals plays an important role in the cycling and distribution of trace metals in anoxic lake sediments (Wolfenden et al., 2005). Some trace metals can be absorbed on or coprecipitated with the iron-sulfide minerals in anoxic sediments. As such, the potential mobility and bioavailability of heavy metals in anoxic sediments are largely determined by the geochemical characteristics of iron and sulfur. Acid volatile sulfide (AVS) is operationally defined as the fraction of sulfides that is extractable by 1 or 6 mol L−1 cold HCl. Some bivalent cation metals, such as Cu, Pb, Zn, Cd, Ni, and Cr, can react with sulfides to form insoluble metal sulfides (Di Toro et al., 1992; Morse and Arakaki, 1993). These reactive trace metals can be extracted during extraction of AVS. When the molar amount of AVS is greater than the molar sum of all the reactive metals, there is expected to be no trace metals available to biota. Using the difference between AVS and reactive metals to assess sediment quality has been adopted widely (Di Toro et al., 1990; Hare et al., 1994; Burton et al., 2005a, 2006a). AVS is a part of inorganic reduced sulfur in anoxic sediments and is the most reactive sulfur component compared to pyrite-S and elemental S (S08 ) (Burton et al., 2006b). During early diagenesis, AVS may react with hydrogen sulfide or polysulfide to form pyrite. This process is evidenced by a high ratio of pyrite-S to AVS in anoxic sediments over time. During this process, some trace metals will be released from AVS and be sequestered during pyritization. Hence, trace metals availability can only becontrolled by AVS temporarily, but pyrite-S can bind it more permanently (Berner, 1984; Howarth and Jøgensen, 1984). Iron is often the most important metal with which sulfur is associated (Burton et al., 2006c). The iron fraction that is reactive towards dissolved sulfide at early diagenetic time scales is normally extracted by dilute HCl (Berner, 1970; Raiswell and Canfield, 1998). Using dilute HCl to extract AVS, reactive iron, and related heavy metals in sediments have been adopted by many researchers (Simpson et al., 1998; Burton et al., 2006a, c). By examining the extractability of trace metals in sediments, the extent of iron-sulfide minerals influencing heavy metals behaviour, such as metal mobility and bioavailability in lake sediments, can be determined. The objective of this study was to understand the geochemical characteristics of iron and sulfur and the extent of iron-sulfide minerals influencing heavy metals behaviour in Taihu Lake sediments.

The high pore water concentration of Fe2+ and relatively low concentration of ΣS2− suggested that the sediment reduction environment was dominated by iron, not sulfate. AVS concentrations in sediments were in the range of unpolluted lakes. Pyrite dominated the reduced inorganic sulfur. Low DOP and DOS values indicate that SO2− 4 may limit the formation of pyrite. The relatively high extractability of Mn did not support the explanation that Mn was bound to AVS or pyritization during formation of pyrite. Our results suggest that it may be bound to carbonate. The relatively low extractability of Pb and Zn and high extractability of Cu and Ni also suggested that sulfides were not the main binding phase. Fe/Mn-oxide or organic matter likely contributes to the binding of Pb, Zn, Cu,and Ni. The low extractability of Cr may indicate that it is bound to silicate rather than sulfides. By all accounts, sulfur may play a modest role in the geochemistry of iron and trace metals in sediments of metal polluted Taihu Lake.