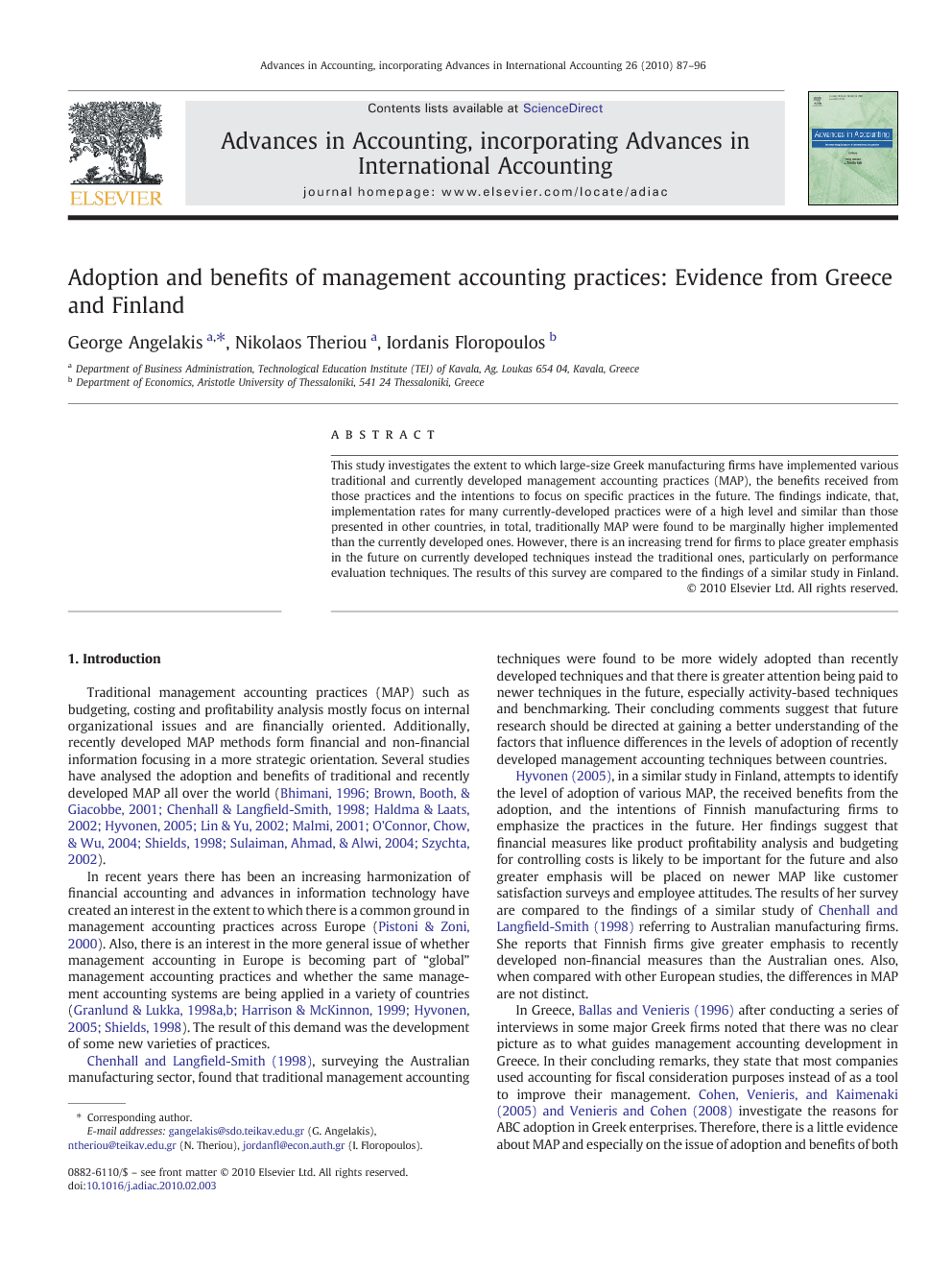 This study investigates the extent to which large-size Greek manufacturing firms have implemented various traditional and currently developed management accounting practices (MAP), the benefits received from those practices and the intentions to focus on specific practices in the future. The findings indicate, that, implementation rates for many currently-developed practices were of a high level and similar than those presented in other countries, in total, traditionally MAP were found to be marginally higher implemented than the currently developed ones. However, there is an increasing trend for firms to place greater emphasis in the future on currently developed techniques instead the traditional ones, particularly on performance evaluation techniques. The results of this survey are compared to the findings of a similar study in Finland.

Traditional management accounting practices (MAP) such as budgeting, costing and profitability analysis mostly focus on internal organizational issues and are financially oriented. Additionally, recently developed MAP methods form financial and non-financial information focusing in a more strategic orientation. Several studies have analysed the adoption and benefits of traditional and recently developed MAP all over the world (Bhimani, 1996, Brown et al., 2001, June, Chenhall & Langfield-Smith, 1998, Haldma & Laats, 2002, Hyvonen, 2005, Lin & Yu, 2002, Malmi, 2001, O'Connor et al., 2004, Shields, 1998, Sulaiman et al., 2004 and Szychta, 2002). In recent years there has been an increasing harmonization of financial accounting and advances in information technology have created an interest in the extent to which there is a common ground in management accounting practices across Europe (Pistoni & Zoni, 2000). Also, there is an interest in the more general issue of whether management accounting in Europe is becoming part of “global” management accounting practices and whether the same management accounting systems are being applied in a variety of countries (Granlund & Lukka, 1998a, Granlund & Lukka, 1998b, Harrison & McKinnon, 1999, Hyvonen, 2005 and Shields, 1998). The result of this demand was the development of some new varieties of practices. Chenhall and Langfield-Smith (1998), surveying the Australian manufacturing sector, found that traditional management accounting techniques were found to be more widely adopted than recently developed techniques and that there is greater attention being paid to newer techniques in the future, especially activity-based techniques and benchmarking. Their concluding comments suggest that future research should be directed at gaining a better understanding of the factors that influence differences in the levels of adoption of recently developed management accounting techniques between countries. Hyvonen (2005), in a similar study in Finland, attempts to identify the level of adoption of various MAP, the received benefits from the adoption, and the intentions of Finnish manufacturing firms to emphasize the practices in the future. Her findings suggest that financial measures like product profitability analysis and budgeting for controlling costs is likely to be important for the future and also greater emphasis will be placed on newer MAP like customer satisfaction surveys and employee attitudes. The results of her survey are compared to the findings of a similar study of Chenhall and Langfield-Smith (1998) referring to Australian manufacturing firms. She reports that Finnish firms give greater emphasis to recently developed non-financial measures than the Australian ones. Also, when compared with other European studies, the differences in MAP are not distinct. In Greece, Ballas and Venieris (1996) after conducting a series of interviews in some major Greek firms noted that there was no clear picture as to what guides management accounting development in Greece. In their concluding remarks, they state that most companies used accounting for fiscal consideration purposes instead of as a tool to improve their management. Cohen et al., 2005 and Venieris & Cohen, 2008 investigate the reasons for ABC adoption in Greek enterprises. Therefore, there is a little evidence about MAP and especially on the issue of adoption and benefits of both traditional and currently-developed MAP or the intentions of firms on specific management accounting methods in the future. The major aim of this study is to identify the MAP implemented by the Greek firms both traditional and currently developed, and their intentions for future use. Secondly, the findings of this survey are also compared with the results of Hyvonen (2005) who has analysed MAP for Finnish manufacturing firms. Thus, this study attempts to identify differences and similarities between these two European countries, Greece and Finland, and tests the homogeneity of European practices (Lukka & Granlund, 1998, Macintosh, 1998 and Shields, 1998). Also, this study contributes to the management accounting literature by providing additional information to a European perspective of management accounting practice.

The evidences reported in this article refer to the relative implementation, past benefits gained and future emphasis of traditional and currently developed MAP in Greece. These findings are compared with similar previous study in Finland. Across the sample, the majority of the practices surveyed were implemented by most organizations. While the implementation rates for many currently-developed practices were of a high level and similar than those presented in other countries, in total, traditional MAPs were found to be marginally higher implemented than the recently developed ones. However, there is an increasing trend for firms to place greater emphasis in the future on recently developed techniques instead the traditional ones, particularly on performance evaluation techniques. The first three most beneficial practices are traditional financial measures including capital budgeting measures like IRR and NPV, budgeting for controlling costs, and budget variance analysis. Since firms participated in this survey are large-sized organizations capital budgeting is an important and necessary tool for expansion plans. Also, equally important are the cost control and variance analysis since there are significant capital inflows–outflows. The respective first three for Finland are divisional profit, budgeting for controlling costs, and variable costing (Hyvonen, 2005). These results partly support older studies undertaken in Europe where they suggest that differences in MAPs are not distinct (Hyvonen, 2005, Lukka & Granlund, 1998, Macintosh, 1998 and Shields, 1998). Future emphasis is on Budget variance analysis, Qualitative measures, and Formal strategic planning. Same as Finland, financial measures will be important in the future and also great emphasis will be focused on currently developed techniques. The results indicate that Greece is behind Finland in practicing various techniques. One main reason that Greek firms exploit the contemporary practices is mostly due to size since large companies have the “luxury” to invest to modern technologies and experiment new trends. Also increased competition among firms creates a more demanding environment and the need for more “specialized” information. In the last fifteen years Greek companies are expanding rapidly in the Balkans and rest of the world. Also foreign companies have created their subsidiaries in Greece. These situations have exposed practitioners to more contemporary practices besides the traditional ones. Another reason is that many Greek nationals study in universities abroad (mainly UK and USA and less to other European countries) where are educated with the latest trends and modern theories and techniques and most of this knowledge comes back in the country. Finally, there are several limitations in this study. First, the study examines only the firms belonging to the manufacturing sector without making any distinction of the results in each specific industry. This is related to the second stated limitation of the relative small sample size. More sectors and industries could be examined for increasing the generalizability of the study. However, the main reason that forced us to conduct our research to the manufacturing sector only was first, our will to compare the results with another previous research, and second, the limited resources in our disposal (i.e., time and money). Another limitation, as already stated, is the relatively small number of companies participated. Mainly, top financial managers, controllers, and senior management accountants were participated. A larger sample size would provide more explanatory power and greater confidence in the findings. Finally, the research does not suggest specific ordering of implementation (in the practices) that provides maximum benefit.