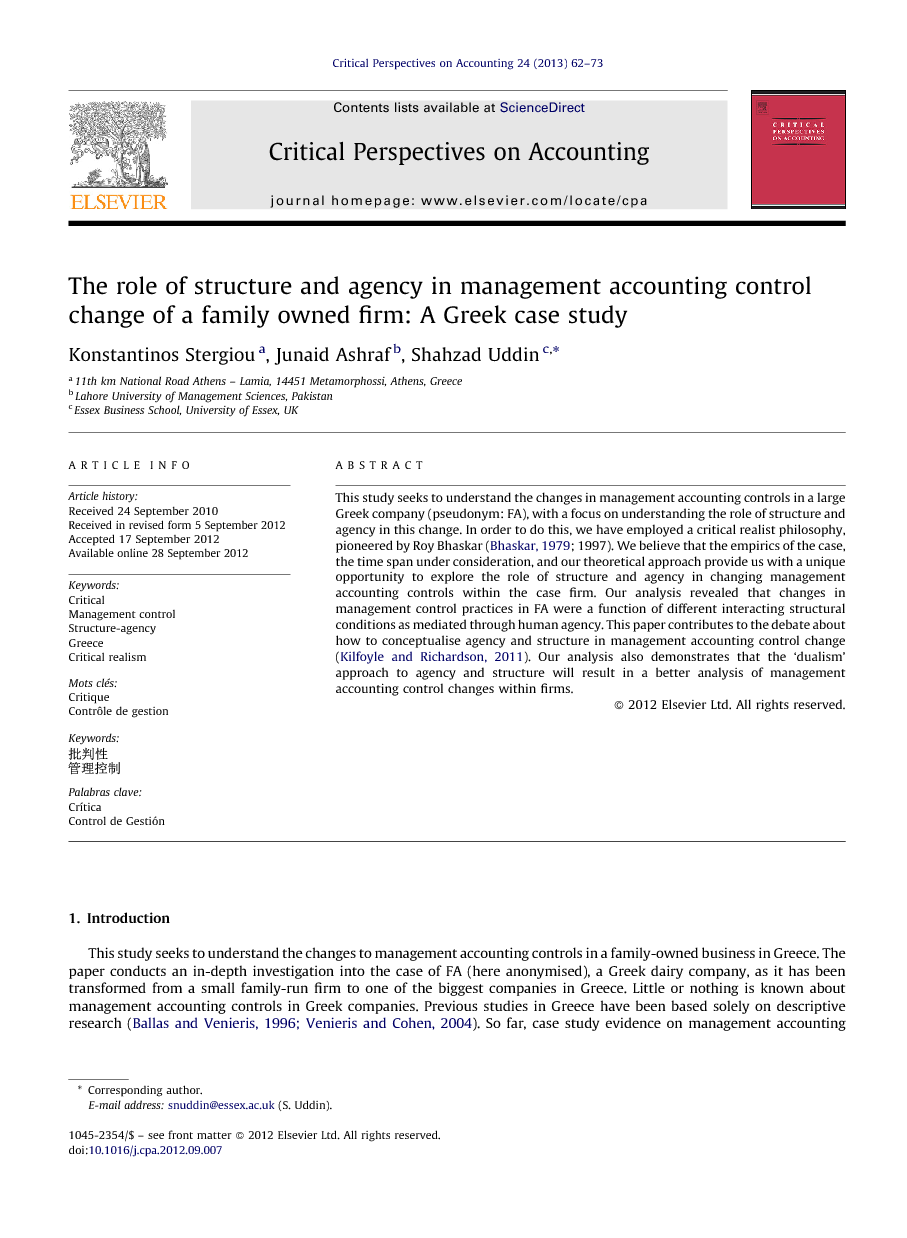 This study seeks to understand the changes to management accounting controls in a family-owned business in Greece. The paper conducts an in-depth investigation into the case of FA (here anonymised), a Greek dairy company, as it has been transformed from a small family-run firm to one of the biggest companies in Greece. Little or nothing is known about management accounting controls in Greek companies. Previous studies in Greece have been based solely on descriptive research (Ballas and Venieris, 1996 and Venieris and Cohen, 2004). So far, case study evidence on management accounting control change has been drawn largely from Anglo-Saxon and Scandinavian countries (Shields, 1997, Burns and Vaivio, 2001, Laitinen, 2001 and Granlund, 2001) and there are very few case studies that focus exclusively on management accounting change in family-owned companies1 (Amat et al., 1994 and Uddin, 2009). The importance of family firms in the economies of both the developed and the developing countries has been extensively discussed in the literature (Corbetta, 1995, Poza, 1995 and Astrachan and Shanker, 2003). In Greece, 80% of businesses are family owned (Kostea, 2003). These firms are located across different industries, and are central to the economic development of Greece and other European countries. Indeed, in most European countries, including Greece, it has been reported that family-owned companies contribute a significant amount to the country's GDP (Corbetta, 1995 and Tsamenyi et al., 2008). Nonetheless, there has been a noticeable lack of research on management accounting in family firms (Tsamenyi et al., 2008). The Greek economy and politics, like those of many other European countries, have undergone major political and economic changes, especially during the 1980s, such as the structural adjustment programmes and joining the European Economic Community (EEC). Unique features of family-owned companies, such as succession, usually bring additional but significant dimensions, especially in the context of changing environments (Louis and Simon, 1989). This paper offers insights into how a family-owned company copes with the new reforms and how these changes affect management accounting controls. Many studies have been devoted to understanding changes in management accounting by drawing insights from various theoretical perspectives (e.g., Burns and Scapens, 2000) in different settings. This paper is in line with Busco et al.’s (2007) call for further reflections on management accounting change. Different conceptualisations and the role of structure and agency in explaining social change have been a topic of great interest to all social science disciplines, and accounting is no exception (Kakkuri-Knuuttila et al., 2008). Accounting researchers have recognised the importance of theoretical schemes that incorporate both structural and agential aspects of social life (Kilfoyle and Richardson, 2011), and some have argued for adopting the ‘duality’ approach suggested by Giddens (1984) (Macintosh and Scapens, 1990 and Englund and Gerdin, 2011). However, this paper, in attempting to contribute to the structure-agency debate in accounting literature, takes the ‘dualism’ approach, giving due consideration, ontologically and epistemologically, to both structure and agency by using the critical realist philosophy pioneered by Bhaskar (1979, 1997). The paper is structured as follows. First, previous research on management accounting changes and the theoretical constructs underpinning the research are discussed. Then research methods are described, followed by a brief section on the socio-economic history of Greece. The case study is presented next: the first part presents the nature of the controls during the early periods followed by the first attempt at management accounting changes; then, there is a discussion of the second attempt at changing the controls. The final section discusses the empirical findings with theoretical constructs and provides some concluding remarks.