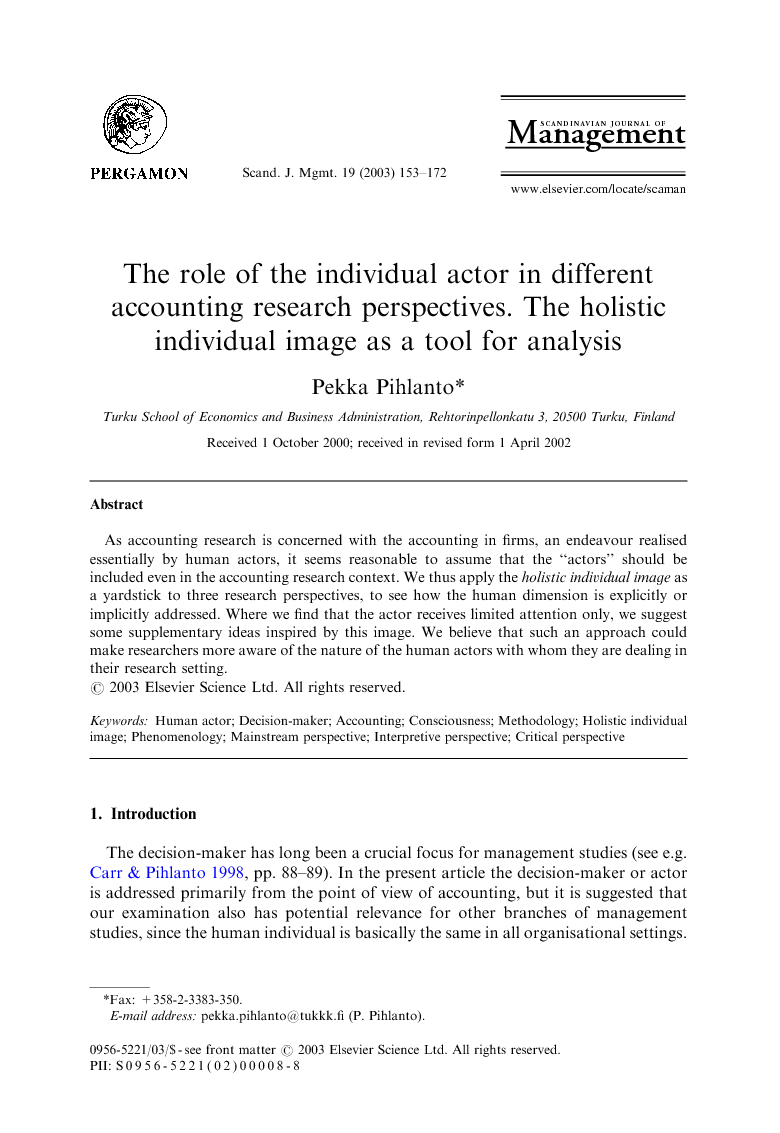 As accounting research is concerned with the accounting in firms, an endeavour realised essentially by human actors, it seems reasonable to assume that the “actors” should be included even in the accounting research context. We thus apply the holistic individual image as a yardstick to three research perspectives, to see how the human dimension is explicitly or implicitly addressed. Where we find that the actor receives limited attention only, we suggest some supplementary ideas inspired by this image. We believe that such an approach could make researchers more aware of the nature of the human actors with whom they are dealing in their research setting.

The decision-maker has long been a crucial focus for management studies (see e.g. Carr & Pihlanto 1998, pp. 88–89). In the present article the decision-maker or actor is addressed primarily from the point of view of accounting, but it is suggested that our examination also has potential relevance for other branches of management studies, since the human individual is basically the same in all organisational settings. In accounting research actors have been analysed in terms of different evaluation styles (e.g. Hopwood, 1976), or various styles of decision-making and learning (Belkaoui, 1980; Macintosh, 1985). Some accounting scholars, relying on Burrell and Morgan (1979), have viewed the actor in an objectivistic or subjectivistic way (see Cooper & Robson, 1989; Otley, 1984; Hopper & Powell, 1985; Chua, 1986; Laughlin, 1995). In feminist accounting Reiter (1994) has presented a feminist critique on the notion of ‘man’. In her view, economic man exists on an entirely abstract level, unmindful of either the social or physical bases of existence. Economic man as a rational utility maximiser has no individuality, no cognition and no personality, and operates without regard to any social, cultural or institutional context (Reiter 1994, pp. 170–171). This feminist critic is thus in line with our proposition that it would be potentially useful in an accounting research context to consider the three following dimensions of human existence simultaneously: consciousness (cognition and personality), situationality (social, cultural and institutional context) and corporeality (physical context). At best, only the cognitive dimension of the actor is addressed in the literature, and then usually in a mechanical way. In particular, the actor has not usually been considered explicitly in connection with research methodologies or approaches. The general aim of the present article is to consider the human actor explicitly in terms of different research perspectives. In this way we hope to gain new insight into such perspectives, and to acquire a new vocabulary and source of inspiration for discussing the problems that we now approach in this individual-oriented light. Before proceeding we need first a relevant view on the human actor, and secondly a framework for approaching research on a methodological level. With the first of these requirements in mind, a philosophical concept of the actor referred to as the holistic individual image (Rauhala, 1986) is suggested here. This defines the individual as realised in the three modes of existence mentioned above: consciousness, situationality and corporeality. The relevance of a philosophical concept in general stems from the total and basic nature of the discipline in question (Webster, 1989). For our second requirement, i.e. a way of approaching accounting research, we adopt the framework representing three alternative perspectives on accounting research as presented by Chua (1986). We have chosen Chua because, in terms of different ‘beliefs’ and in a useful manner, her framework defines the basic methodological alternatives of accounting research. Having made these two choices, the first aim of this article is then to apply the holistic individual image to three accounting research perspectives. We thus use this image as a kind of yardstick for exploring ways in which the human dimension may be present in each of the perspectives. Since we believe that a profound understanding of human nature must be potentially useful to researchers, the second aim of the article is to suggest some complementary ideas inspired by the holistic individual image to cases where the research perspective addresses the human actor in a restricted way only. It is true that to some extent the respective research interest determines the research perspective and perhaps too the concept of the human actor that are considered relevant to a particular researcher. However, one of our premises is that the notion of the holistic actor suggested here is a realistic alternative for almost any kind of accounting study. As to our own position vis-à-vis ontological and epistemological assumptions, our position is basically subjectivistic (cf. Pihlanto, 1994), since the holistic individual image is based on existential and phenomenological philosophy as well as on humanistic psychology. This has lead to choice of nominalistic ontology and anti-positivistic epistemology, and of voluntarism, in relation to human nature, and ideographic methodology (Burrell & Morgan, 1979). However, we also find it appropriate to address the mainstream perspective, which is clearly objectivistic in its nature. This can be motivated by the fact that the world studied by the mainstream researcher is in principle the same human-driven world in which the subjectivist is interested, and moreover that all researchers are human actors just as much as the actors in firms. The human actor always has a role in an accounting context. Sometimes, even, one key person's role may be decisive, for example for a change of accounting systems (Granlund, 1998). Both groups of researchers may thus gain from knowledge of the human actor's way of acting. The article is designed as follows. First the holistic individual image is defined as the focus for discussion. Next, the different research perspectives, and in particular the views on the notion of the human actor that they represent, are critically analysed in terms of this image. Finally, the results of the examination are discussed in concrete terms from the point of view of a practical research work. The idea is to provide the researcher with practical insights and understandings about the nature of the human actor that can be applied to the empirical research site.