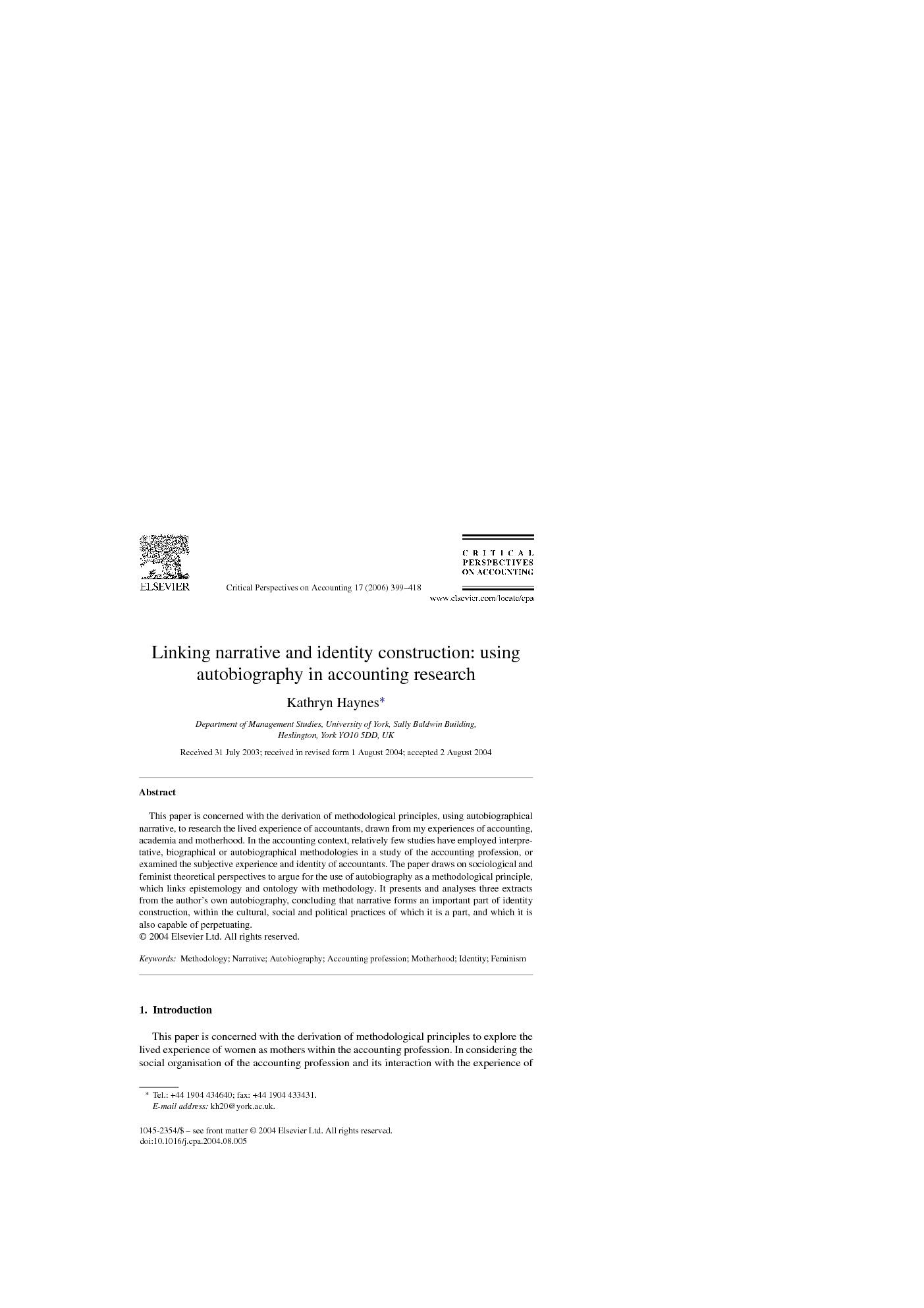 This paper is concerned with the derivation of methodological principles, using autobiographical narrative, to research the lived experience of accountants, drawn from my experiences of accounting, academia and motherhood. In the accounting context, relatively few studies have employed interpretative, biographical or autobiographical methodologies in a study of the accounting profession, or examined the subjective experience and identity of accountants. The paper draws on sociological and feminist theoretical perspectives to argue for the use of autobiography as a methodological principle, which links epistemology and ontology with methodology. It presents and analyses three extracts from the author's own autobiography, concluding that narrative forms an important part of identity construction, within the cultural, social and political practices of which it is a part, and which it is also capable of perpetuating.

This paper is concerned with the derivation of methodological principles to explore the lived experience of women as mothers within the accounting profession. In considering the social organisation of the accounting profession and its interaction with the experience of motherhood on women accountants and their sense of self, I hope to construct an original and informative account of identity, which considers alternative concepts of the self and different narratives of identity within the cultural and political practices of motherhood and accounting. In stating this, I am perhaps being a little disingenuous. I would argue that these are sound aims, worthy of academic study, but they are just that: academic aims, couched in academic terms for an academic audience, of supervisors, examiners, and peers; and devised by me, as my academic self. Actually, my primary aim is much simpler: to try to understand how I came to be myself, as woman, mother, accountant, and academic, with the myriad of sensibilities that all these beings entail. This paper is in essence more of a personal journey, to find how the self I am, the identity I have, the feelings I recognise, the wants I act upon, are affected by political forces around me, in particular, those that have shaped my identity as professional accountant, mother and academic. The accounting profession is particularly interesting to me as a result of my own experiences of training and qualifying as a Chartered Accountant in the UK in the late 1980s and early 1990s in both a large national and a small independent firm. It is the profession I know and to which I ‘belong’, though I am no longer a practising accountant. During that time I was also bringing up very small children and experienced at first hand the contradictions and juxtapositions of professional and mothering identity. The impetus for the work arises directly from a desire to explore these experiences within a theoretical framework to illuminate the concepts of self and identity. The paper makes the case for the use of autobiographical narrative in accounting research, where it has been little used, as a means of exploring the construction of identity. It is structured as follows: I first briefly discuss different theoretical perspectives on the self and identity, terms which I use in the paper. I then examine the use of narrative as a means of exploring the self, and discuss the turn to biographical methods within the social sciences, which is beginning to make an impact on accounting research. I explore how to make use of autobiographical narrative as a researcher, drawing from feminist perspectives and notions of reflexivity, before examining some of the benefits and difficulties involved in filtering research through an autobiographical lens. I argue for the use of autobiographical material not only as a rich resource but also as a methodological practice which links epistemology, ontology and methodology. Using three autobiographical narratives, I explore and discuss how the stories we tell about ourselves are part of a reflexive process of identity construction allowing us to explore our ontology and our epistemology of the self, in a process of understanding who we are, in this case within the cultural institutions of the accounting profession and motherhood.

This paper has outlined my argument for the use of autobiographical material in the derivation of methodological principles to explore the lived experience of women as mothers within the accounting profession. I have been explicit in stating how the work derives from my own desire to explore and understand my own experiences as accountant and mother, and more recently as academic, within a theoretical framework relating to identity and the self. I believe that my own history or autobiographical narrative must be at the core of a journey into the understanding of the self, as it relates to me. However, beyond this, the paper has wider implications. What is first articulated in a personal voice allows private perspectives and understandings to be communicated and formulated as public knowledge, to challenge social and cultural structures. In seeking a set of methodological principles for the use of such subjective experience, I have looked to the use of narrative or autobiographical stories about the self as a means of exploring the epistemology of the self within broader social and cultural narratives, in the belief that autobiographical writing can involve not only recalling the past, but the very act of recreating the past, in an attempt to discover and invent the self (Eakin, 1985). Finding some but not extensive use of narrative accounts within the accounting context, I turned to other disciplines, particularly the feminist social science tradition, to seek theoretical support for the use of autobiography. I explored various ways of using subjective and autobiographical material in research, which included acknowledging subjectivity or using myself as a ‘participant’ in a research study, both of which do not sufficiently centre myself, as researcher and subject, in this study. I rejected Harrison and Lyon's (1993) distinction between the autobiographical account, and the feminist use of intellectual autobiography (Stanley, 1992) which locates the researcher reflexively in the research process, arguing that the two could be used together, both overtly and reflexively, to provide an autobiographical lens through which the research is viewed. Writing my own autobiography has been a reflexive process, which explores my own identity construction and sense of self as accountant, mother and academic. The three stories from my autobiographical narrative which I present in this paper convey a sense of identity that has been heavily influenced by cultural expectations of the accounting profession and the institution of motherhood, both with their discourses of competence and ‘success’, whilst being re-evaluated within a reflexive academic context. They explore the role of the audience in shaping the narratives, the role of narrative in shaping versions of my sense of self, and the effect of temporality in interpreting the narratives. A critical use of autobiography has the potential to explore issues of identity, such as how we become who and what we are, and offers a challenge to traditional bodies of knowledge within social contexts such as accounting and motherhood. I argue it offers an opportunity for new insights and should be much more widely used in accounting research. In one form of this, I am currently engaged in a wider project, using the methodological framework of autobiographical narrative outlined in this paper, which aims to analyse the politics of professional and mothering identities of women accountants in the UK, by exploring the relationships between the institutions of accounting, the social institution of motherhood, and the particular subjective experience of women. There are many other forms in which narrative interpretative methodologies could also be used in accounting research. Finally I suggest, that the process of autobiographical narration, with its delving into the past and into memory, forms an important part of identity construction and a means of experiencing past experiences that shape, and allow greater understanding of, the present self. As McNay (2000, p. 80) suggests, it incorporates aspects of identity which transcend the traditionally oppositional humanist and post-structuralist views on identity construction, as: “The idea of narrative shares the poststructural emphasis on the constructed nature of identity; there is nothing inevitable or fixed about the narrative coherence that may emerge from the flux of events. Yet, at the same time, the centrality of narrative to a sense of the self suggests that there are powerful constraints or limits to the ways in which identity may be changed”. Autobiography integrates the constraints and influences of structure and discourse with the intentionality of the individual, and the narrative model of identity mediates the tension between stasis and change without denying that either are aspects of selfhood, implying there is never a complete closure or an essential fixity to human nature (Reedy and Haynes, 2002). There is a play between who I am as something continuous and permanent, and the idea that I have been and might be different. I give meaning to my identity through the construction of a story, integrating the self through time, flux, contradiction, change and possibility. In writing my own explicitly autobiographical and reflexive account, I argue that the narrative expresses the experiences and values of the narrator, while simultaneously constructing, formulating and remaking those values and experiences, in an active and reflexive process that links epistemology, methodology and ontology. The principle of creativity as a form of agency is central to this process, as the working of the imagination on the discursive and experiential resources available to the individual becomes a form of micro-political action and a potential subversion of dominant discursive formations.