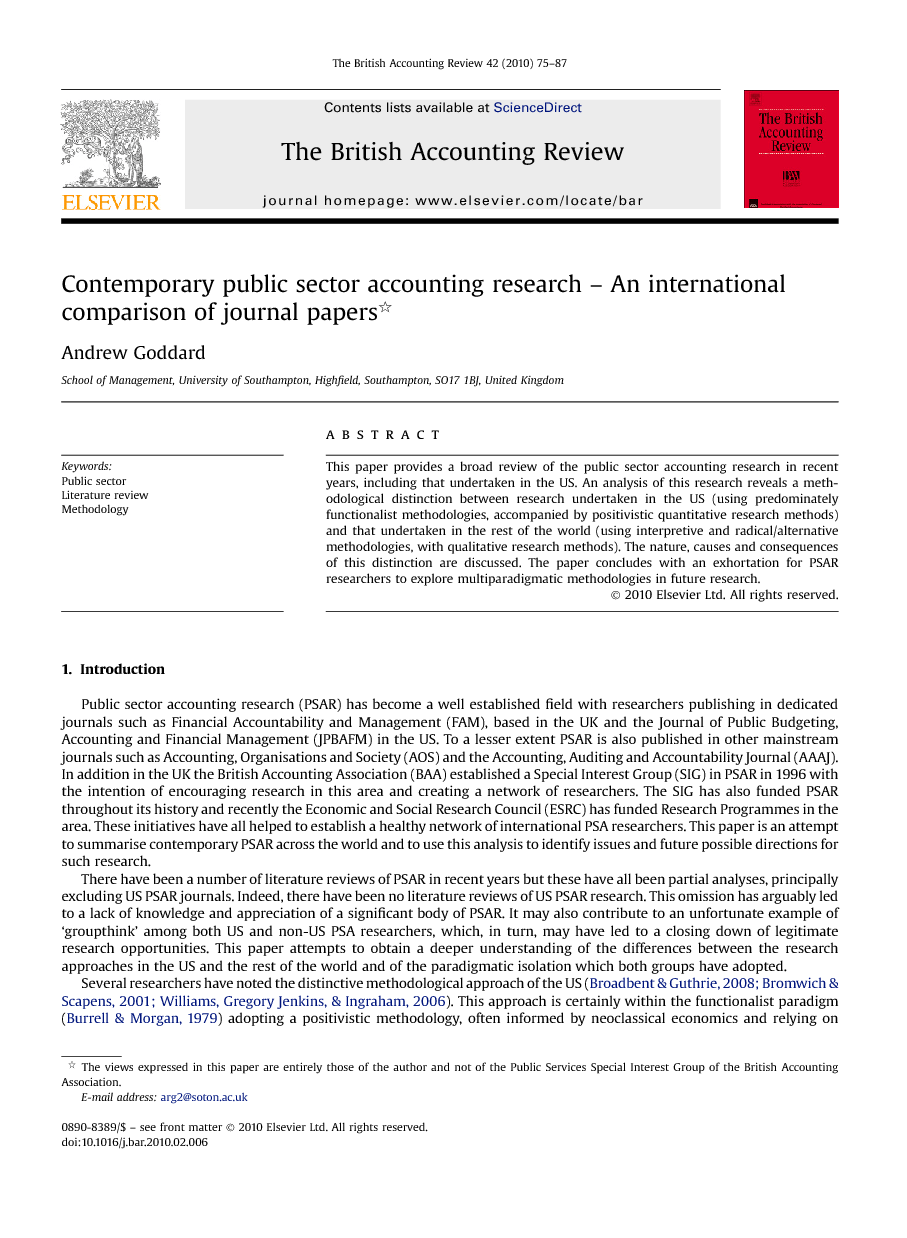 Public sector accounting research (PSAR) has become a well established field with researchers publishing in dedicated journals such as Financial Accountability and Management (FAM), based in the UK and the Journal of Public Budgeting, Accounting and Financial Management (JPBAFM) in the US. To a lesser extent PSAR is also published in other mainstream journals such as Accounting, Organisations and Society (AOS) and the Accounting, Auditing and Accountability Journal (AAAJ). In addition in the UK the British Accounting Association (BAA) established a Special Interest Group (SIG) in PSAR in 1996 with the intention of encouraging research in this area and creating a network of researchers. The SIG has also funded PSAR throughout its history and recently the Economic and Social Research Council (ESRC) has funded Research Programmes in the area. These initiatives have all helped to establish a healthy network of international PSA researchers. This paper is an attempt to summarise contemporary PSAR across the world and to use this analysis to identify issues and future possible directions for such research. There have been a number of literature reviews of PSAR in recent years but these have all been partial analyses, principally excluding US PSAR journals. Indeed, there have been no literature reviews of US PSAR research. This omission has arguably led to a lack of knowledge and appreciation of a significant body of PSAR. It may also contribute to an unfortunate example of ‘groupthink’ among both US and non-US PSA researchers, which, in turn, may have led to a closing down of legitimate research opportunities. This paper attempts to obtain a deeper understanding of the differences between the research approaches in the US and the rest of the world and of the paradigmatic isolation which both groups have adopted. Several researchers have noted the distinctive methodological approach of the US (Broadbent and Guthrie, 2008, Bromwich and Scapens, 2001 and Williams et al., 2006). This approach is certainly within the functionalist paradigm (Burrell & Morgan, 1979) adopting a positivistic methodology, often informed by neoclassical economics and relying on quantitative research methods. In contrast, non-US research is predominantly interpretive and critical, often informed by social theorists concerned with context and relies on qualitative methods. However, adoption of either approach should not be regarded as the only correct way, nor should it dismiss research undertaken with a different approach. In accounting research in general there is growing concern (Khalifa and Quattrone, 2008 and Reiter and Williams, 2002) with ‘the lack of recognition and communication across….paradigms resulting from the fragmentation and polarisation of accounting academia’ (Modell, 2009, p. 208). Moreover, the stranglehold these paradigmatic approaches hold over the research agendas can lead to insularity and limited research within each community. For instance little contextual research using interpretive methodologies is undertaken in PSAR in the US and little functionalist PSAR is undertaken elsewhere. The limiting effect this has upon the research agenda may be deepened by the tendency for functionalist researchers to address subject matter that is more immediately amenable to quantitative methods and interpretive/critical researchers to address subjects more amenable to contextual, qualitative methods. Yet another possibility for extending PSA research lies in the emerging interest in the broader accounting research community, in combining theories, methodologies and methods across paradigms, to enhance the research agenda (Brown and Brignall, 2007, Davila and Oyon, 2008, Hopper and Hoque, 2006, Locke and Lowe, 2008, Modell, 2005 and Modell, 2009). This paper addresses the gap in literature reviews of US PSAR, analyses and discusses whether and to what extent a paradigmatic dichotomy exits in PSA research in the US and elsewhere and examines the characteristics and consequences of such a dichotomy. Finally, the paper discusses the possibilities for releasing PSA research and researchers from these paradigmatic ‘bunkers’ by encouraging researchers to adopt approaches alongside those dominant in their own academic contexts and/or adopting multiparadigmatic approaches