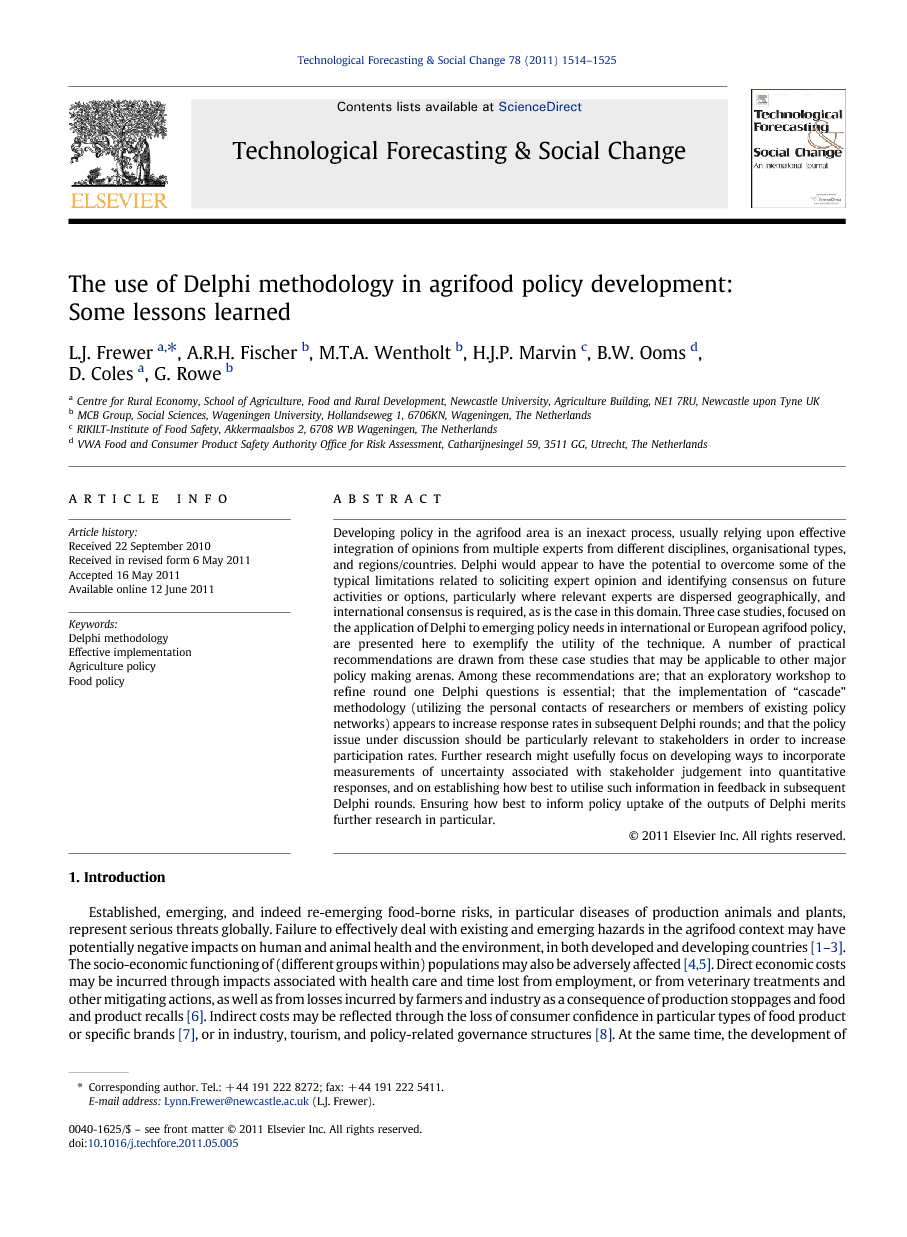 Developing policy in the agrifood area is an inexact process, usually relying upon effective integration of opinions from multiple experts from different disciplines, organisational types, and regions/countries. Delphi would appear to have the potential to overcome some of the typical limitations related to soliciting expert opinion and identifying consensus on future activities or options, particularly where relevant experts are dispersed geographically, and international consensus is required, as is the case in this domain. Three case studies, focused on the application of Delphi to emerging policy needs in international or European agrifood policy, are presented here to exemplify the utility of the technique. A number of practical recommendations are drawn from these case studies that may be applicable to other major policy making arenas. Among these recommendations are; that an exploratory workshop to refine round one Delphi questions is essential; that the implementation of “cascade” methodology (utilizing the personal contacts of researchers or members of existing policy networks) appears to increase response rates in subsequent Delphi rounds; and that the policy issue under discussion should be particularly relevant to stakeholders in order to increase participation rates. Further research might usefully focus on developing ways to incorporate measurements of uncertainty associated with stakeholder judgement into quantitative responses, and on establishing how best to utilise such information in feedback in subsequent Delphi rounds. Ensuring how best to inform policy uptake of the outputs of Delphi merits further research in particular.

For broad, international Delphis an exploratory workshop to refine round 1 Delphi questions is important to ensure the best, most comprehensive, and most focused issues for inclusion in a largely quantitative survey (necessary to overcome possible limitations of international participation). This may involve few key stakeholders or experts in the policy area under consideration. The use of forms of “cascade” methodology, utilizing the personal contacts of researchers or members of existing policy networks, appears to increase response rates in subsequent Delphi rounds, but at the same time introduces biases in relation to the accessed personal and professional networks. Internet approaches to conducting Delphi could be amplified by Social Networking structures (such as LinkedIn), which might facilitate a more structured mix of both personal contacts and cascade methodology. It seems that if the policy issue under discussion is more relevant to stakeholders, this increases participation rates and improve the quality of their inputs. Further development of involving and retaining large participant groups with broad expertise from many countries remains a challenge for the future. Evaluation of the actual uptake of the outputs of Delphi surveys into policies remains a topic which needs additional attention in order to demonstrate the actual effectiveness of the Delphi method.