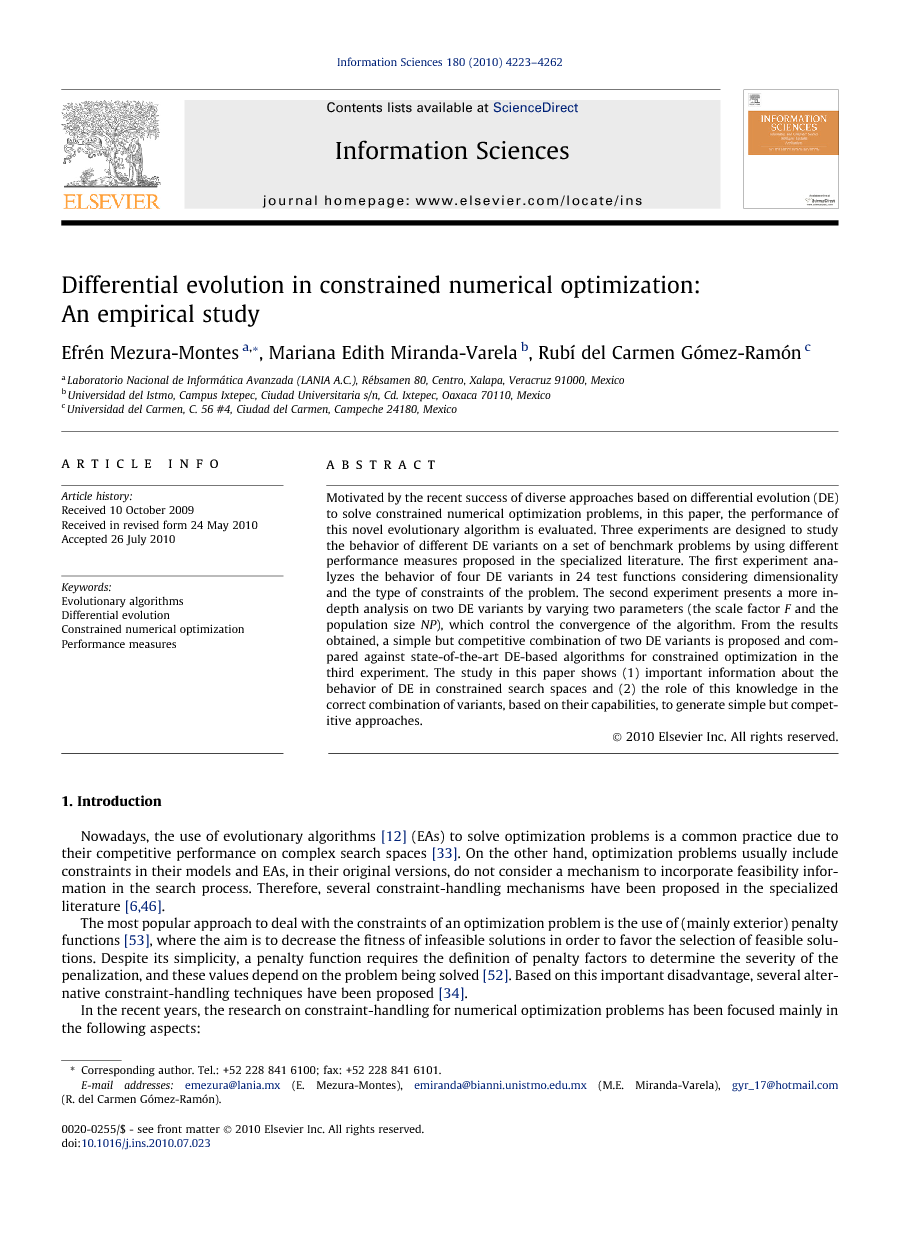 Motivated by the recent success of diverse approaches based on differential evolution (DE) to solve constrained numerical optimization problems, in this paper, the performance of this novel evolutionary algorithm is evaluated. Three experiments are designed to study the behavior of different DE variants on a set of benchmark problems by using different performance measures proposed in the specialized literature. The first experiment analyzes the behavior of four DE variants in 24 test functions considering dimensionality and the type of constraints of the problem. The second experiment presents a more in-depth analysis on two DE variants by varying two parameters (the scale factor F and the population size NP), which control the convergence of the algorithm. From the results obtained, a simple but competitive combination of two DE variants is proposed and compared against state-of-the-art DE-based algorithms for constrained optimization in the third experiment. The study in this paper shows (1) important information about the behavior of DE in constrained search spaces and (2) the role of this knowledge in the correct combination of variants, based on their capabilities, to generate simple but competitive approaches.

The findings of this second experiment are summarized in the following list: • DE/rand/1/bin was clearly most competitive in the high-dimensionality test problem. • DE/rand/1/bin was the variant with less sensitivity to NP and F in all the six test problems. • DE/best/1/bin required less evaluations to reach the global feasible optimum in all the test problems, but it was less reliable than DE/rand/1/bin. • The most useful F values for both variants were 0.6 ⩽ F ⩽ 0.9, regardless the type of test problem. • DE/rand/1/bin/ performed better with small to medium size populations: 30 ⩽ NP ⩽ 90, while DE/best/1/bin required more vectors in its population to provide competitive results 90 ⩽ NP ⩽ 150. • Regarding the convergence behavior reported in unconstrained numerical optimization with DE, a different comportment was observed in the constrained case, because low scale factor values (F ⩽ 0.5) prevented both DE variants to converge, even with larger populations. The exception was the test problem with a low-dimensionality. Additional experiments were performed in test problems with similar features as those presented in the paper: g19 for high-dimensionality, g09 for medium-dimensionality, g08 for low-dimensionality, g07 with only inequality constraints, g17 with only equality constraints, and g05 with both type of constraints. Those results can be found in [41] and they confirmed the findings mentioned above. The summary of findings suggests that the ability of DE/rand/1/bin to generate search directions from different base vectors allows it to use smaller populations. On the other hand, larger populations were required by DE/best/1/bin, where the search directions are always based on the best solution so far. Regarding the scale factor, the convenient values found in the experiment showed that these two DE variants required a slow-convergence behavior to approach the vicinity of the feasible global optimum or best known solution. To speed up the convergence by decreasing the scale factor value does not seem to be an option, even with larger populations. The combination of larger populations and DE/rand/1/bin seems to be more suitable for high-dimensionality problems. Finally, DE/rand/1/bin presented less sensitivity to the two parameters analyzed. Meanwhile, DE/best/1/bin, which may require a more careful fine-tuning, can provide competitive results with a lower number of evaluations. Based on this last comment, the drawback found in DE/best/1/bin may be treated with parameter control techniques [13].