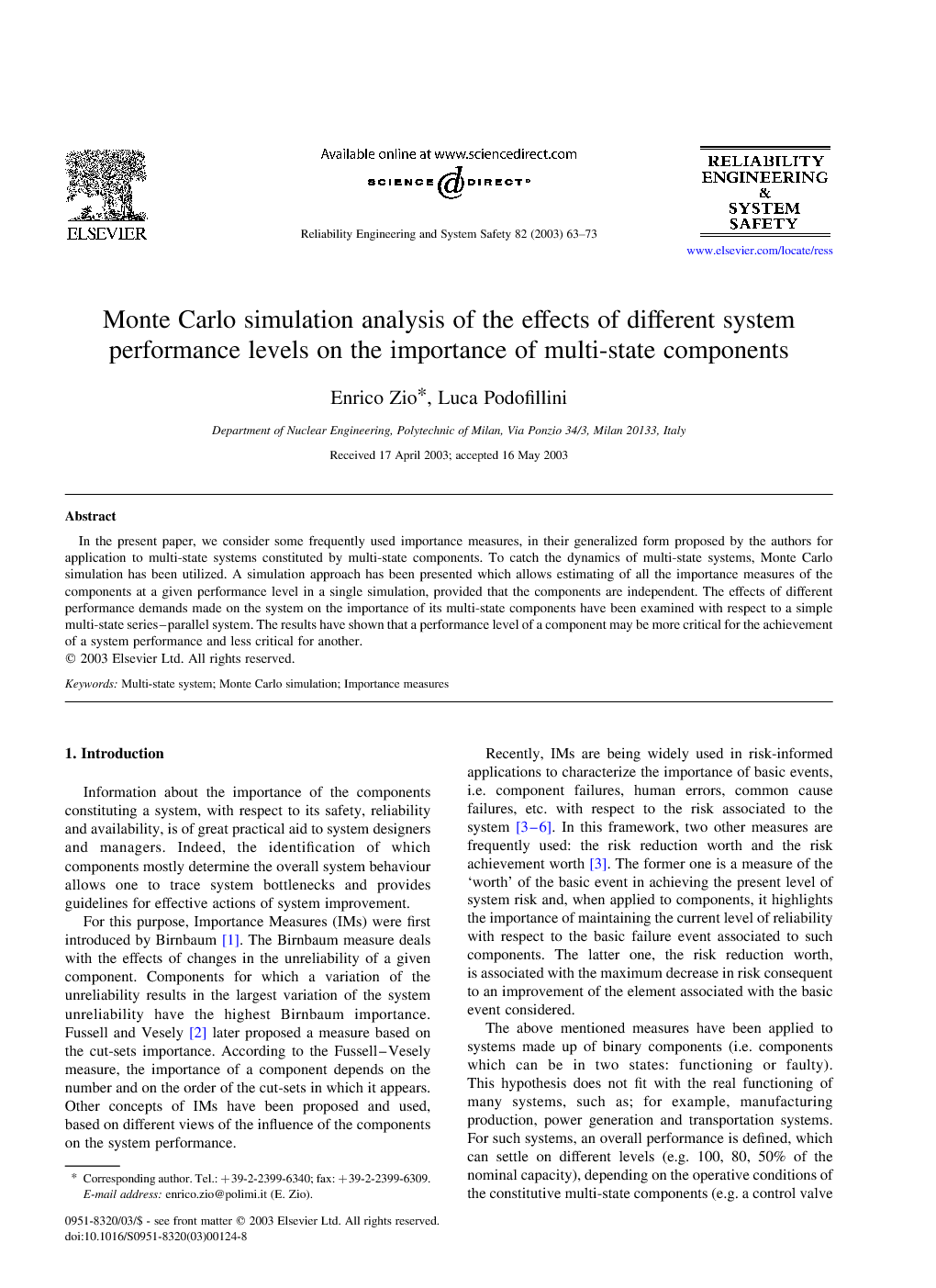 Information about the importance of the components constituting a system, with respect to its safety, reliability and availability, is of great practical aid to system designers and managers. Indeed, the identification of which components mostly determine the overall system behaviour allows one to trace system bottlenecks and provides guidelines for effective actions of system improvement. For this purpose, Importance Measures (IMs) were first introduced by Birnbaum [1]. The Birnbaum measure deals with the effects of changes in the unreliability of a given component. Components for which a variation of the unreliability results in the largest variation of the system unreliability have the highest Birnbaum importance. Fussell and Vesely [2] later proposed a measure based on the cut-sets importance. According to the Fussell–Vesely measure, the importance of a component depends on the number and on the order of the cut-sets in which it appears. Other concepts of IMs have been proposed and used, based on different views of the influence of the components on the system performance. Recently, IMs are being widely used in risk-informed applications to characterize the importance of basic events, i.e. component failures, human errors, common cause failures, etc. with respect to the risk associated to the system [3], [4], [5] and [6]. In this framework, two other measures are frequently used: the risk reduction worth and the risk achievement worth [3]. The former one is a measure of the ‘worth’ of the basic event in achieving the present level of system risk and, when applied to components, it highlights the importance of maintaining the current level of reliability with respect to the basic failure event associated to such components. The latter one, the risk reduction worth, is associated with the maximum decrease in risk consequent to an improvement of the element associated with the basic event considered. The above mentioned measures have been applied to systems made up of binary components (i.e. components which can be in two states: functioning or faulty). This hypothesis does not fit with the real functioning of many systems, such as; for example, manufacturing production, power generation and transportation systems. For such systems, an overall performance is defined, which can settle on different levels (e.g. 100, 80, 50% of the nominal capacity), depending on the operative conditions of the constitutive multi-state components (e.g. a control valve having multiple open/closed states to regulate a flow rate). Systems characterized by different levels of performance are referred to as Multi-State Systems (MSS). For an up-to-date presentation of these systems within the reliability field, the readers should consult Ref. [7]. Furthermore, in the limit, there are systems whose performances may be characterized in terms of an infinite set of continuous states [8]. This, for example, is the case of passive systems whose utilization is growingly advocated in the new generation of nuclear power plants and whose physical behaviour dictates the system performance, much in a continuous fashion. Efforts are, thus, being made to evaluate the importance of components of MSS. Early progress towards the extension of the Birnbaum measure to the case of MSS can be found in Ref. [9], for the case of finitely many states, and in Ref. [10], for the case of continuum structure functions. More recently, the Birnbaum measure has been extended to the case of MSS composed of binary components [11] and to the case of components with dual failures-modes [12]. In Ref. [13] a measure of importance of the state of a multi-state component is introduced which accounts for both the probability of the state and the corresponding level of performance. In Ref. [14] the authors have generalized some of the most frequently used IMs to MSS made up of multi-state components. The introduced extensions characterize the importance of a component achieving a given level of performance with respect to the overall mean system unavailability and performance. When applied to MSS, the concept of unavailability is related to the capacity of the system to meet a required demand. For example, in power engineering, it is the ability of the system to provide an adequate supply of electrical energy. In this sense, the multi-state unavailability is a function of the individual components' performances as well as of the demand required to the system. Consequently, the impact of the performance of a component on the system multi-state unavailability may depend on the required demand: a component can be more important for the achievement of one required performance level and less important for another. In this paper, we analyse the effect of requiring different system performance levels on the importance of its constitutive multi-state components. As a means for evaluating the importance measures in MSS, we consider Monte Carlo simulation (MC) which allows the realistic modelling of the complex multi-state behaviours characteristic of modern industrial plants and systems [15]. The proposed approach evaluates, in a single simulation, the importance measures of all the components of the system with respect to a given level of performance. The paper is organized as follows. In Section 2, the concept of availability and performance of MSS are given together with the extension of the IMs proposed in Ref. [14]. In Section 3, we present the MC simulation approach for the evaluation of the extended importance measures. A numerical application is provided in Section 4 to analyse the effect on the components importance ranking of considering different levels of demanded system performance. Section 5 presents the conclusions drawn from this work.